Father of the Bride: the State's Don Toner 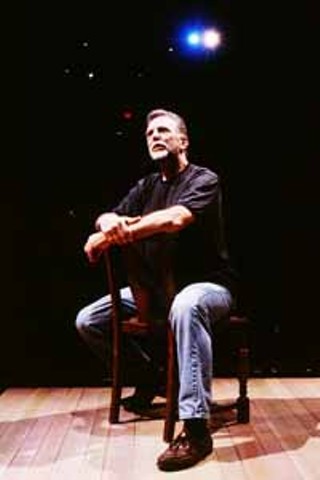 When people say that Don Toner built the State Theater Company, they aren't just speaking figuratively. From the day he came onboard as producing artistic director for Live Oak Productions -- now the State Theater Company -- Toner has been wielding hammers, saws, screwdrivers, wrenches, drills, and just about every other kind of implement in the toolbox to construct things for his company: sets for productions, stages and seating areas, lobbies and offices, and, in the case of the company's current home, the State Theater, a venue for live performance out of a 60-year-old movie house. "That's one thing about theatre," Toner will tell you, "I've always liked having my hands in it." It's a quality that distinguishes Toner from a lot of artistic directors; you won't find many who have sledgehammered the concrete, cut the boards, hammered the nails, and run the wires through so much of the theatres they run. Toner has, and his hands-on approach has a lot to do with where the State Theater Company is today.

When Toner took on the job of artistic director back in 1987, the future of Live Oak was uncertain. The company was in debt. It had suspended operations for several months following the departure of founding artistic director Mac Williams and managing director Jeanette Brown. The theatre was operating out of a remodeled one-story office space at Third and Nueces that could easily be sold out from underneath it. And Austin's economy was about at the bottom of the bust. "When I arrived here," says Toner, "I didn't know really what I was getting into, except that I was willing to make a commitment, a long-term commitment, which I hadn't made before. I very cavalierly said, 'Well, hell, anybody can create a theatre in a vibrant economy and have plenty of money.' But I knew it would be a struggle. I mean, it's a struggle at the Cincinnati Playhouse which has existed for 25 years and has a three or four million-dollar budget. It's always a struggle to create good work, to challenge yourself, to build an audience, to pay the bills -- not nearly the struggle that this has been, mind you -- but it's a struggle."

But in Toner's world, struggles are good. It's what speaks to him in the theatre: "a character who is engaged in some effort, that is beset by some problem that has to be solved. A play like Steel Magnolias, for instance, has a life-and-death kind of struggle going on, but within it people are living their lives courageously, they're facing their struggles. Characters who are just tossed on life's storm, essentially victimized by life, these characters don't interest me at all." It's the ones that struggle who survive, who grow. Out of our struggles come understanding, richness, beauty. Toner recalls the observation that all the cultures which have suffered through wars throughout the centuries have given the world great art. "Switzerland never had a war," he notes drily. "They gave us clocks and Swiss cheese."

Toner had more on his mind than cheese and clocks. He believed that the struggle he engaged in at Live Oak could eventually give Austin a professional resident theatre, perhaps one on par with the Guthrie Theater in Minneapolis or Actors Theatre of Louisville. And so he fought for it, developing a corps of actors with membership in the professional union Actors Equity and operating under Equity's Small Professional Theater contract. He sought out the successes of the New York theatre scene and secured the regional premieres of Dancing at Lughnasa and As Bees in Honey Drown. He developed new work with writers on the national scene such as Larry L. King and Carter W. Lewis, as well as writers closer to home such as Ellsworth Schave. Not all of those efforts brought Toner's vision closer to realization, as he will acknowledge, but they kept the theatre alive and active and pushing toward something, engaged in the struggle.

Struggle is in Toner's blood. It was part of his life from his earliest days. "I had the pleasure of growing up extremely poor, in a family of 13," he says. "So it was a struggle just to get your share of the mashed potatoes." He was a scrapper who frequently took on the enemies of his older brothers, and, he says, "I took a little pride actually in being the gladiator for us, being the guy who was going to be the army, the enforcer." It isn't simply that he likes brute force or the idea of beating someone; it's that his fights are ultimately for someone else. "Whether I'm fighting a real fight or fighting a battle of some sort," says Toner, "I think what drives me is the desire to protect or defend or in some way further the gain of the people that I have taken responsibility for helping or doing for. I'm fairly driven. I like to work, and I like to get things done. I don't like to say 'No' or 'I give up' or 'I'm tired.' I like to finish the things that I start. But I think what really keeps me going is the people for whom I feel I'm doing it, whether it's my family, my friends, my associates, my collaborators, my staff, or my audience."

Any conversation with Toner about why he does what he does will always come round to people. Any struggle he has been through, any blood which had been shed, has been worth it, "worth the effort, the time, the energy, the disappointments, because of the people," he says. "I've had the enjoyment of the cast of characters to work with -- artists and administrators who together were able to amass enough courage and determination to pull off things that, in many cases, just didn't have much of a chance of succeeding." The man is fiercely loyal to those with whom he works, always quick to share credit with them and to praise their efforts in his theatre's success, and to work with them again and again and again. It's been one of the hallmarks of Toner's leadership that he refers to the artists and technicians and staffers with whom he collaborates as "family."

Why have they thrown in their lot with Toner and his never-ending battle? The reasons vary, but Toner sees at least some of them as having "an appreciation for a struggle." As he fought to build the company, to find a new home for it when it was evicted from its original home at 300 Nueces, to make a new home out of the State Theater, always fighting onward, never giving up, he feels "people watched me -- my determination, my tenacity and stubbornness -- and they were, I won't say inspired by it but impressed by it enough to say, 'Well, he's got something there. Maybe we should help him bake that bread -- and enjoy that bread.' And a lot of people have done that. I'm so lucky with the people that I've gotten a chance to work with, the support that I've had from the artists and staff and, god bless them, the audience. I don't know why they think I deserve it, but I've had it and I appreciate it."

Now, Toner stands near the end of his era as the State's artistic leader and driving force. In the next few months, a new artistic director, Scott Kanoff, will take the baton from Toner and lead the State into its new era as a partner with the Paramount Theatre in the Austin Theatre Alliance. It is a natural time for taking stock, to look back at the ground covered, the battles fought, and what, if anything, was accomplished. When Don Toner surveys his 13 years at Live Oak/the State, he finds, "A lot of what I've done has been just pure survival, to keep the theatre alive, to keep it going, staying in the game. The most obvious piece of work that I've done, the most obvious thing about any theatre, is the building itself. Succeeding at bringing this company from homelessness to a solid facility that's secure is one of the accomplishments I've made and not necessarily the greatest. The assembly of artists -- Babs George, Steve Shearer, Jill Parker-Jones, Janelle Buchanan, Barry Miller, Tom Parker, Ev Lunning, and so on -- to have that kind of family of ours come together, stay together, work together ... Putting that together and sustaining it was an important accomplishment to me. And I could list a handful of specific productions, individual pieces of work that were really worth the whole trip for me: The Night Hank Williams Died, which pretty much put us on the map, in my tenure; The Immigrant; I'm Not Rappaport; Steel Magnolias; Bosque County, Texas; the Irish plays.

"I really think that I put myself in for a pretty good fight, and I don't mean a fight with others, I mean a fight to survive, a fight to be, a fight to grow and live and even prosper in some ways. It's been a very good fight, and there have been a lot of dark moments. As I look back and I'm trying to figure out, Was it worth it? Of course it was worth it. We haven't completely succeeded; the vision that I laid out 12 years ago has not been fully accomplished, but it's really difficult for me now is to find any regrets. The defeats along the way are far outnumbered by wonderful moments of triumph or sometimes just sheer relief at having come through something."

What lies ahead for Toner is unclear. He says, "I'm 60 years old, and in just the last 13 years I've produced over 100 plays of all sizes and shapes, directed about 40 of them, designed, acted, built, written. I've done enough. I could put my feet up and say, 'Fine. Let's go fishing.' I have no desire to do that. The past year, I've directed four plays in the last 12 months, acted in one, designed one, produced all eight plays that we've done. So the energy's still there. The desire is still there. And part of me still feels like I have things to prove, to myself or to whoever happens to be watching. But I don't give up. I like to hang in there." The struggle goes on.