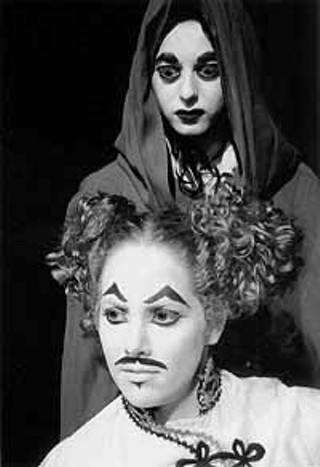 The usual hazards of children's theatre are in full effect here at VORTEX Repertory Company's Summer Youth Theatre staging of Aristophanes' The Frogs. One boy was talking and rustling his program so loudly that I turned and glared at him with as much grown-up menace as I could muster, at which point he and his friend switched to crinkling their aluminum cans, seguing no doubt from making origami birds to fashioning a tire-slashing knife. Others in the opening night audience guffawed and gabbed their way through the show like it was the Def Comedy Jam, while parents cooed adoringly as their children pranced their way around the stage.

And prance these young actors do, with all the glorious energy and presence of youth, and all the slickness of a well-trained troupe, professionally directed by VORTEX regular Clay Towery. These ambitious students all show great ability, with not a sloucher in the lot. Everyone appears to be having a grand old time, and having fun in one's adolescence with a 2,400-year-old Greek play is no mean feat.

The play's age is not, however, readily apparent, aside from the ancient Greek names and the journey-to-the-Underworld plot. Classics professors are apt to blanch at Kenneth McLeish's modern translation of Aristophanes. While some updating is necessary in this potty-humored tale of Dionysos' quest for the best poet in Hell, McLeish and Towery both go all out with the modifications. There is ample contemporary slang and a plethora of modern references. Euripides is played with convincing arrogance by Elizabeth Fast as a bereted beatnik (complete with snapping chorus). The crowd-pleasing David Saldaña (one of three adult guest artists) plays Aiakos with a thick Scottish accent, clad in a punk/S&M get-up. Many of the male characters are played by actresses, two of whom even sidle up to piss against columns.

The plot is sketchy and largely secondary to the playful bawdiness of the dialogue. The title presumably refers to the frogs who, in one dramatic scene during the first act, torment the Underworld traveler Dionysos, played with verve by Sarah Jacobson. Dionysos' slave Xanthius, acted with tremendous animation by Tiffany Nicely-Williams, meets her on the other side of the river. The rhetoric contest between Euripides and Aeschylus for best poet takes up most of the second act and may wear on those of short attention span, despite the enthusiasm of the participants.

As for age-appropriateness, there is no nudity, this being Youth Theatre. But let's remember where we are. This is still The Vortex, which means no opportunity for sexual innuendo goes untaken. In a scene reminiscent of last year's nudity-rich VORTEX Repertory Company production Dark Goddess, a seductive muse dances with castanets as her clingy white dress falls off her shoulders. In addition to the usual fart jokes, allusions are made to a strip joint, a whorehouse, pot-smoking, pube-plucking, the "prick of desire," and homosexuality via a limp-wrist gay joke (which elicited a hiss from at least one audience member). There's spanking. The expression "horse cock" is prevalent.

On the one hand, the sexual content has merits. The entrance of a chorus of undulating girls in ripped tie-dye halters (and, at another point, in French maid outfits) did distract the bad boys behind me from their chatter. (I believe their reaction to the halters was "Whoa!") On the other hand, however, it's also distinctly creepy. These are young people, and while the sexiness is all in good fun within the context of the play, there's something disquieting about kids and teens so gamely accommodating Aristophanes' lewd humor and the VORTEX company's notoriously provocative aesthetic.

The professionalism of the piece makes it all the more confusing for the audience, who are put in the awkward position of cheering on the deft performances of the actors and the elegance of the production while at the same time grappling with the presence of scantily clad young women carrying feather dusters. They're portrayed as sexual entities, but some of them can't be older than 14. While raunchy banter is all well and good, that degree of prurience is just plain icky when adults are in charge and children are involved. While the VORTEX may have certain titillation standards to maintain, the company's street cred wouldn't take too hard a hit if just once a year it let kids be kids.