The Art of Elizabeth Guenthner 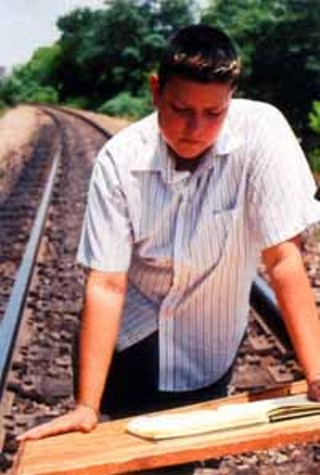 Austin native Elizabeth Guenthner is exhibiting her artwork, throughout the year, in almost every local cafe where it's possible to have art displayed. This is good for you because, although the works aren't hanging in any bona fide gallery, you're now more likely to be exposed to their precise, distinctly disturbing beauty. It's good for Guenthner, too, because, well, what artist wouldn't enjoy greater appreciation of her creations? But let's be ravening capitalists for a moment, keeping with the changing tenor of this boomtime city. Even before considering Guenthner's art qua art, let's cast a wizened eye at the fiscal bottom line: Does it sell? Showing an artist's work in local coffeehouses, upscale or otherwise, instead of in galleries ... Is this a sound business policy?

"As a benefit of having so many different shows, people are starting to recognize Liz's name when they see it," says Michelle Reeves, Guenthner's business manager. "They're interested, they're checking out the Web site, and we're starting to make sales. We've sold four originals so far, and we've sold about 500 laserprints -- which go for $10 each."

This is no small feat, considering that Guenthner's work was exhibited precisely nowhere until it appeared at the Borders Books & Music in South Austin in December of '99.

"The reason we've decided not to be in galleries," says Reeves, "is there always seems to be something required up front -- a donation or a cost. And since we're not making as much as we're putting in, we figured we should do what we can with the limited resources we have. And we're doing pretty well."

The sales, including those through the recent Pecan Street Festival, are partially due to sheer exposure -- at Borders, the Omelettry, the Cue Lounge, Magnolia Cafe, Mozart's, Kerbey Lane Cafe, Austin Java Company, Mojo's, Flightpath, Star Seeds, and other sites -- and the exposure is wholly due to the efforts of manager Reeves. But, after that, Guenthner's work easily sells itself -- and to a wide spectrum of buyers.

I'll try to tell you why.

We're a world shot through with competing aesthetics, all of us targets of the constant cultural drive-by, our body politic riddled by hollow-point bullets of personal and societal and corporate promotion. "Where have you been -- living in a cave?" That's what we say to someone who's unaware of something that seems, to us, ubiquitous. "I guess I've been out of the loop for a while" is often the response, because Out Of The Loop is another thing we say; but what we mean is that we've just been in a different loop. There are so many loops these days, everything's been so codified if not commodified, and everything is so swiftly broadcast that there's no more Getting Away From It All. What there is, merely, is Shifting Attention To A Different Sector. It's this sort of hunger for The Sector Less Taken that makes the current fascination with outsider art a logical conclusion. It's a newly appreciated Different Sector (although it's been officially appreciated, really, since 1922): the work of untrained artists whose vision and creation is relatively unadulterated by society and culture. As if anything other than that was somehow inauthentic. As if there were some cave that people could live in to escape the onslaught of media. As if one were saying, "This indie band is cool, not because it's any good at all but because it's not yet signed to a major label."

And that can define the parameters of cool, if such definition is necessary, sure; and if that's what matters to someone, so be it. But some people, God bless 'em, appreciate creative work -- regardless of its outsider status or its art school pedigree, regardless of its ghetto origins or its numerous Clios -- when it's good.

But, gosh, that's simply a matter of opinion, right? That's one of those judgment calls, isn't it? Well, yes, it is. And here's mine: Elizabeth Guenthner's work is good. No, actually, it's much better than just "good." Listen ...

1. There's a definite style that all graffiti artists tend toward when they're tagging a wall: a certain curvilinear consideration that's inherent in the use of spray cans and the stark colors that come from them. And when that style is well-rendered, it does things for the eye that little else can hope to. It could be argued that, at least in the U.S., graffiti style has been mimicked in the corporate world in order to lend the resultant promo material some secondhand street cred. But when we consider that the closest link to such style elsewhere is in the flashy signage of Tokyo, the evolution of which was shaped by the operational constraints of neon and grand-scale bitmapping, we realize that even the commercial American co-opting of graffiti style is eventually a matter of visual effectiveness. Something equally jarring and attractive.

And all one could wish for, beyond that, is such style employed a bit more subtly, in the service of quieter, more personal mythology.

2. There's a style of sequential art that's raised to its heights by commercial practitioners such as Moebius or Frank Miller or Istvan Banyai. It's a way of rendering lines and shadows, a particular attention to the details of a scene, a deep sensibility regarding time and its interpretation through panel breaks. This style communicates well, with relatively little abstraction; it's the sublime side of concrete, it's great for unfolding narratives.

And all one could wish for, beyond that, is such style used to illuminate the singular, plotless moments of realization in the life of an artist.

3. Elizabeth Guenthner grants both those wishes.

And it's not that she has no other options; it's not that, okay, she's a definite master, but only of style redolent with such pop origins. Guenthner is one of those artists who can take, for instance, pencils -- whether graphite or Prismacolor -- and render portraits of photographic resolution, as seen in her double portrait, First Born. It's a purposeful strategy that she chooses to depict her edgier, more intimate expressions in a way that allows the style of rendering itself to provide an indication of the artist's position within our cultural gestalt. 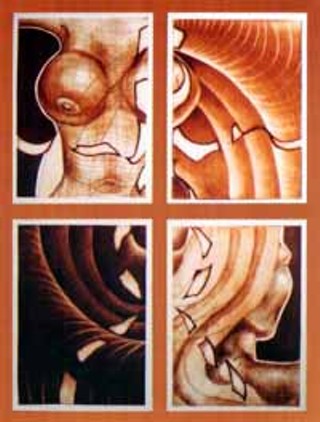 Or, anyhow, it works so damned well.

Guenthner's classic precision of line drawing and watercolor is framed by bold images more recognizable from fabulously defaced subway cars, in pieces such as No More Nails, Legacy, and Let it Out. A series of personal icons -- hammers, nails, fetuses, pacifiers, electrical connections -- recurs throughout these and other works, their cumulative effect even more haunting than the original impact. In painting after painting, in drawings and etchings (e.g., Nurture Me or her four-paneled Divineness), Guenthner offers clues to the complex mystery of what's inside her head. The full solution to this mystery may be, ultimately, as inaccessible to the artist as it is to her audience; but, with clues like the ones supplied, that mystery can be almost beside the point.

A point sufficient in itself, I'm suggesting, is the evidence of skill and craftsmanship, of control over line and shade and hue, of time spent placing ink precisely on paper, of deftly scraping into the metal plates of intaglio ... and this evidence as presented through evocative, personal images that can strike numerous chords in the heart of anyone. Regardless of that person's position in or out of any given loop.

You take a nail, say, and you hold it out to the world, and you place that nail in a context that simultaneously jars the expectations of such a nail and makes us suddenly see the context with greater clarity due to the nail's presence, and you're going to make one hell of an impact. An impact similar, on a mental level, to nailing your aesthetic thesis to the forehead of your audience.

You nail something down brilliantly enough, it'll breach the membranes separating so many loops, so many cultures; it'll certainly rise beyond the boundaries of the pigeonholes we might have applied for convenience's sake. That can't be a bad thing, taking E. M. Forster's dictum of "Only Connect" and putting it into practice through measured stimulation of the visual cortex. And it's especially a good thing when such connection is just, really, a kind of by-product of demons exorcised and angels presented from the terra incognito of another thinking human.

Elizabeth Guenthner's work can be seen currently at: