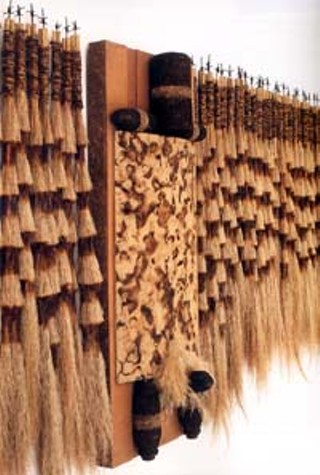 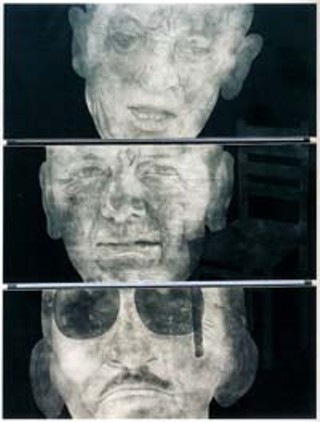 The Interrogators by Paul Stopforth

In Zwelethu Mthetwa's vibrant color photograph on the posters for "Liberated Voices: Contemporary Art From South Africa," the new show at the Austin Museum of Art (AMOA), a man in a sunny, open room washed in bright colors faces the camera. He is standing in his living room. With his hat tilted and his lips curling into a smile, he tells us: Townships are not just bleak and battered war zones; they are people's homes. South Africans are individuals with style. South Africa has a flavor all its own. This assertion of the individual is at the heart of the exhibition. Which makes "Liberated Voices" fresh and full of surprises: The 50 pieces in the collection resonate with the hungry energy of a country emerging from oppression; the show is brimming with experimentation and unique, original perspectives. A touring exhibition organized by the New York Museum for African Art, the show largely features works made after 1994, the year apartheid collapsed. However, the exhibit actually begins -- both literally and in spirit -- with a handful of artists from South Africa's "Resistance Art" movement of the Seventies and Eighties, which protested the oppression of the white government. 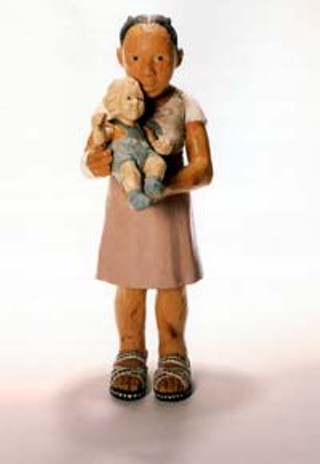 Mother and Child by Claudette Schreders

Walking through the doorway into the AMOA -- Downtown galleries, the first work you see is Paul Stopforth's Interrogators from 1979. The astounding graphite-and-wax image depicts the faces of three of Stephen Biko's torturers on a black background. Their heads are transparent, as if superimposed over an X-ray so that their bone structure is showing through the skin. The feeling of bodily decay is horrible and sickening; their expressions belie ignorance of their behavior, their mortality, their very humanity. But more than anything the image says "We see through you." 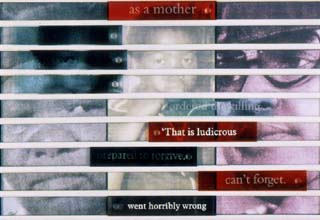 Three pieces from Sue Williamson's "Truth Games" series, which examines the role of the Truth and Reconciliation Commission, hang in the small gallery to the north of the main entrance. These interactive pieces contain images from the commission's interviews overlaid with metal slats and blocks of text that viewers can rearrange over the surface of the images. Sliding phrases such as "remorse" and "as a mother" from photos of Winnie Mandela to those of government officials relocates visual and verbal cues to create new versions of the events. The effect is direct but clever: At once, the piece confronts a plethora of issues, from the complexities of the commission's task and the difficulties in assigning responsibility for crimes to the partiality of the media and the importance of perspective. Williamson shows us that the processes of constructing meaning are fluid and fragile. And the act of representation -- whether in everyday speech, in politics, or in art -- is fraught with misunderstanding.

The "Truth Games" series attempts to make peace with the past and forge a new consciousness for the future. This sort of simultaneous looking back and looking forward assumes numerous shapes in "Liberated Voices." Willie Bester's mixed media work X Roads depicts both the strength and the weariness of the impoverished classes of Cape Town, showing two adults and four children framed by explosions of color; they hover above chicken wire and roads that lead nowhere. X Roads gives a view of a modern family, but it's really a larger history of a people in the tradition of mural art. Some of the exhibition artists, such as Thabiso Phokompe and Samson Mnisi, go back further, creating works that echo the art and objects of pre-colonial Africa. The artists take their inspiration from tools and weapons, using found materials -- leather, wood, wire -- to create art that moves fluidly between past and present. All of which could easily melt into a cloying romanticism or a vague translation of real history. But the pieces work because just at the point where they seem to reference "primitive" art, they reveal themselves to be imaginative objects.

If the work of such artists as Mnisi and Bester seems consciously African, then the work of other artists -- Sandile Zulu and Claudette Schreuders among them -- is consciously contemporary. Zulu creates meticulously crafted abstract pieces that appear to exist in a world of their own. They are beautiful objects constructed of native grasses, paper, and wood, with touches of barbed wire and newspaper that balance history and crisply worded titles. More than anything else, however, they radiate an overarching sense of balance and order, and a carefully refined aesthetic. The 1997 work Frontline With Centurion Models features neat rows of reedy branches which have been carefully burned, sectioning the branches and giving them new structure; these are crowned with a line of barbed wire. Zulu's use of abstraction in his materials and processes allows him to create a symbolic vocabulary which includes scarification, a connection to the elements, and apartheid. At the same time, it overwhelms the viewer with the yellow and brown hues of the savanna near his home. He connects us to a distinct sense of culture and history through a sensuous but ambiguous impression. Claudette Schreuders dresses up personalized versions of African icons -- the mother, the child, the hunter -- in European forms. For the past five years, she has been creating carved wooden sculptures which represent people in her life. Like Zulu, Scheuders considers process an important part of the symbology of her work; she works with native woods and found accoutrements for each sculpture. At first glance, her work is deceptively European, but the figurines are uniquely African and tell uniquely African stories. The comic sculpture of the boyfriend dressed up in "hip" retro-safari wear encapsulates a distinct subculture.

The blending of disparate cultural and artistic influences results in a show that is very much an exploration of personal identity. And as such, each of the artists works from a very different context. The paradox of "Liberated Voices" is the way in which categories like "African" and "contemporary" and "traditional" start to break down. Which prompts one to ask: What is South African Art? What is the undercurrent of these works which is identifiably South African? To what extent does the movement draw on African traditions and to what extent does it look to European ideas? Of course, these issues are being played out in studios and exhibition spaces all over the world, even here at home. You could well ask: What is Latino art? What is African-American art? What is Anglo art? If the AMOA exhibition is any measure, the answer is different for every artist and every work of art. Which makes for very good viewing.

"Liberated Voices: Contemporary Art from South Africa" is on view through August 13 at Austin Museum of Art -- Downtown, 823 Congress. Call 495-9224.