Even after 23 years, Austin's favorite musical comedy group, Esther's Follies, is still lively, still spirited, and the perpetual briskness and animation, the audaciousness and cheeky style, rub off on you, so that every visit is rejuvenating. 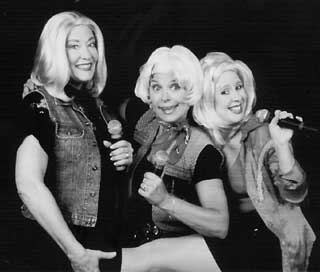 From the shit-eating grin on his face, you get a real good sense that our White House-huntin' governor feels this presidential debate is really going his way. His presumptive-Republican-nominee head bobs gleefully as lumber-limbed opponent Al Gore extends a log-like arm and assures the crowd, "I can make our economy keep growing! I can make our country come together as one! I can make America great!" Then the Guv responds emphatically, "And I can make a bong out of a Dr. Pepper can and some tinfoil!"

That's politics by the Pool -- Esther's Pool, of course, where Jerome Schoolar's vice-president is so stiff, he has to be wheeled in on a dolly, and Kerry Awn's George W-dot-com Bush is a party-hearty good ol' boy who boasts for the record that he didn't exhale and, as for cocaine, he just likes "the way it smells." The Esther's crew has long had a knack for treating our civic leaders and public servants with a blend of irreverence, high-minded satire, and low humor that provokes maximum laughs -- and usually without sacrificing a point. It's reassuring to see that tradition endure in the Follies' 23rd year; it means that while politicans may be able to fool all of the people some of the time and some of the people all of the time, at Esther's they'll be the fools to all of the people all of the time.

Not that politicos are alone in this; Esther's makes everybody play the fool some time -- why else are they called the Follies? -- and as the season for sweltering settles in, they make computer geeks, Yankee transplants, SUV owners, Texas high school football players, South Austinites, boy bands, and bozos with too many items in the Express Checkout line do time. The show is a summer smorgasbord, with new bits, such as a delicious parody of Green Eggs and Ham that's more Dr. Ruth than Dr. Seuss, send-ups of current events in the ongoing musical medley and TV news segments, and treats from throughout the Follies' history. Patsy Cline is there, still extracting romantic mementoes, sports equipment, and medical instruments from the depths of her decolletage; the slide tour of South Austin is there, with Kerry Awn, dapper in his 7-Eleven uniform, sharing the sights from below the Town Lake line; and the durable C&W parody "Mama, Don't Let Your Babies Grow Up To Be Yankees" -- a hit for the Follies' version of the Judds some years ago -- is back, but as a vehicle for new sweethearts of the rodeo the Dixie Chicks.

No matter what vintage the pieces are, the Follies players always deliver them as if they'd just been conceived an hour before showtime. You expect that in topical bits such as "Lip Sink," the wry spoof of those poppy boy bands manufactured from cookie cutters for preteen girls (and you get it, replete with Backstreet/'N Sync moves and vacant expressions), but you don't necessarily expect it in a chestnut like Patsy. Yet Follies First Lady Shannon Sedwick roars into it at full throttle, feeding it that urgent energy of a just-penned joke that you're trying to find the laughs in. And who knows how many times Ray Anderson has performed some of the illusions that pepper the show with mystery, but he projects such panache and enthusiasm and a sense of fun in every one that you'd be forgiven for suspecting he was making his debut.

With the seasoned pros -- Sedwick, Anderson, Awn, perpetual Clinton and perennial good sport Keith Kelly, exuberantly comic and impossibly gymnastic Cindy Wood, and keyboard czarina Lyova Rosanoff -- coming off so fresh alongside the relative newcomers -- "straight guy" Schoolar, fire-headed seductress Tamara Lee Beland, human cartoon Shaun Wainwright-Brannigan, wild man and Belushi-in-training Adam Rodriguez, accordion-wielding madman Allen Robertson, and Mistress of Spunk Laurie Guzda -- all of whom still project Follies freshness, the Pool seems to be a Fountain of Youth, where the humor never gets stale and the comedy never grows old. It's always lively, always spirited, and the best thing of all is that the briskness and animation, the audaciousness and cheeky style, rub off on you, so that every visit is rejuvenating. You walk out of the Pool with a lighter heart and a springier step than when you walked in, like a kid set free from school with a whole summer ahead to live it up.