The Possibilities: Theatre on the Move 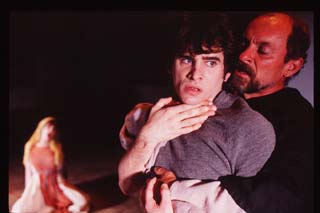 Theatre on the Move

What could be better than watching Howard Barker's The Possibilities in an old airplane hangar at the Robert Mueller Airport and running around on the tarmac during intermission?

The question stumps me, too.

Probably the best example of Barker's Theatre of Catastrophe, The Possibilities is a collection of 10 scenes connected thematically without a narrative thread or continuing characters. "The achievement of Barker's work has been its exemplification of the obligation of choice or refusal for the audience and performers alike," David Rabey wrote in Howard Barker, Politics and Desire. "The sense of having witnessed too much is crucial. It leads not to a drunkenness or a reeling exhaustion but a roaring sense of possibility and a rinsing out of accumulated expectations."

Director Robi Polgar is no stranger to this, having previously directed Barker's Scenes From an Execution, and with this Public Domain production, Polgar challenges the audience to be active, to make choices throughout. Presented in pageant wagon fashion, The Possibilities has no fixed seating. Instead, the audience must move themselves from scene to scene. You also won't get a program at the beginning of the show, so don't ask -- although large banners held by black-robed figures (who also do a great job of directing patron traffic) offer an insight into each scene.

My favorite of the pieces was "She Sees the Argument But," featuring Jessica Hedrick and Karie Hunt in a (wo)man vs. (wo)man conflict -- an older conservative pitted against her younger contemporary. In about 10 minutes, debates concerning sexual politics, fashion, equality, and servitude jettison around the airplane hangar only to fade with the scene's dimming lights. On first glance, the 10 scenes may seem less than kinetic. On closer examination, however, the finished product is both complex and compelling, complete with history, violence, and dark humor.

The acting pool assembled is nothing short of impressive -- Monika Bustamante's brutal woman surviving the Russian Revolution by way of prostitution; Michael Miller's overwhelmed (and very naked) Alexander the Great; Katherine Catmull's disenchanted Judith; and Travis Dean's transient "disseminator of knowledge," to name a few. And more importantly, all of the actors work well with each other.

My suggestions for those who attend: