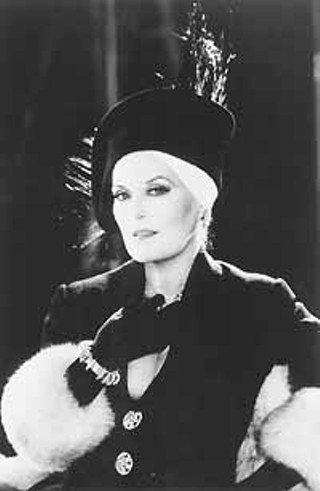 I am big, it's the pictures that got small.The voice with the lilt-ing British accent had not changed in 35 years. When I heard Petula Clark on the other end of the phone line, suddenly, it was early 1965 again and I was seven years old. My sister had brought home a little 45 rpm of "Downtown" by Petula Clark. It was her second record purchase, her first being "This Diamond Ring" by Gary Lewis and the Playboys. We wore the record out playing it over and over and pretending we were dancers on Shindig and Hullabaloo. Petula (forget about calling her Pet -- she hasn't been "Pet" since she was a child) had a clear, sweet yet sophisticated sound that produced a string of hits including "I Know a Place," "My Love," and "Don't Sleep in the Subway." She won a Grammy for "Downtown" and became the only female vocalist to have her first two singles chart in the Top Three (a record that held until Cyndi Lauper broke it in 1982). When "My Love" hit No.1 in 1966, she became the first British female singer to have two No.1 hits. She typified the swinging London scene of the mid-Sixties with a fresh and exciting approach to pop music, combining her hitmaking sound with her artistry as a concert performer. She was the first British female singer to top the U.S. charts since the early Fifties. Seemingly an overnight success in America, she had already been a major star for most of her life in Britain and across Europe. She was a child star of radio, television, film, and recording, and a No.1 singer in France, with an enormous following across Europe before she ever hit the American shores. She made scores of films, notably the 1969 remake with Peter O'Toole of Goodbye, Mr. Chips. Though with little subsequent visibility in America, she remained an international star, touring in concerts and recording.

Joe: I didn't know you were planning a comeback.

I hate that word. It's return. A return to the millions of people who've never forgiven me for deserting them. In 1993, Clark made a most improbable comeback in America by being cast alongside David and Sean Cassidy in the musical Blood Brothers, a show that was sinking fast on Broadway. Says Clark of the producer's dedication to make the show a success by recasting: "It was a stroke of genius, but it took courage on his part. Most producers would just give up and say, 'Let's cut our losses and get out.' He dug his heels in, and I thought, Yes, I'd like to work with this great American cast, and we went in and pulled this show together. We did it for over a year."

Though she claims to not read anything that's written about her, the excellent notices for Clark could not have escaped her attention. This paved the way for her to step in for venerated actress Elaine Paige and play the part of Norma Desmond in the London production of the Andrew Lloyd Webber stage musical Sunset Blvd.

Norma: They're dead! They're finished! There was a time in this business when they had the eyes of the whole wide world. But that wasn't good enough for them, oh, no! They had to have the ears of the world, too, so they opened up their mouths and out came talk, talk, TALK!

It's hard to separate Norma Desmond from Gloria Swanson, easy to forget that Swanson was simply playing a role that wasn't even written for her specifically. Turned down by Mary Pickford and Mae West, the role of Norma gave the struggling Swanson the choicest role she'd ever had, and she sank her teeth into it with abandon. Claiming the part as her own for all time, she became the only actress who dared to reveal her own decline so publicly; the world was captivated.

So, more than 40 years later, when it was announced that Glenn Close would star in a Broadway musical based on the movie, many Sunset purists, myself included, were aghast. Glenn playing Gloria? With music? Was nothing sacred? And yet it offered tantalizing possibilities of new depths of opulence and depravity, two of my favorite qualities. The show opened to highly mixed reviews and has continued to receive them regardless of which actress is playing Norma: Glenn Close, Betty Buckley, Elaine Paige, or Petula Clark. Says Clark, "I had seen Glenn Close in it on Broadway and not been moved at all ... I left the theatre feeling strangely dissatisfied."

When I saw it with one of my favorite divas, Betty Buckley (yes, since you brought it up, she did play the gym teacher in Carrie), I too was strangely dissatisfied, but it seemed less about the actress playing Norma, and more about the show itself. For openers, Billy Wilder's movie of Sunset is an incredible exercise in black-and-white photography, inspiring the viewer's imagination to paint the screen with emotional colors of madness. In the Broadway version, the colors are all emotional, and so in-your-face with their brilliant reds, purples, and golds that not only is the magic of the black-and-white decimated, but so is the visual connection of the black-and-white film to the silent movie era. Then there was the musical's hydraulic set, which was both awe-inspiring and detrimentally distracting. And the music ... some nice songs, but nothing particularly magnificent. The spectacularly talented Miss Buckley had a field day with the part, but I never really felt the character of Norma come alive onstage. The part requires the mannered and pervasive presence that all of those actresses have given it, but in the movie, Swanson seethes and writhes her way through the role. In translation to the stage, many of Norma's nuances are lost -- her curling lips and the sparkle of madness in her eyes, and so the actress playing Norma has to play this already larger-than-life character larger still. The stage Sunset is, however, a powerfully effective vehicle to showcase the skills of these women -- each of them displaying an incredible understanding of their chosen profession -- in a time when, as usual, there aren't enough good parts for ladies of "a certain age."

Norma: Writing words, words, and more words. You've made a rope of words and are strangling this business. But there's a microphone right there to catch the last gurgle. And Technicolor to photograph the red swollen tongues.

Faced with a seemingly irresistible offer to play Norma, Clark told producer Trevor Nunn she was not interested. "But he had made up his mind I was going to do it," she recalls, "and it took him three hours, bless his heart, to persuade me that not only would I do it, but that I'd be great in it. So, I said, 'Listen, I don't feel for this woman, I won't be able to do with it what Glenn did with it.' And Trevor said, 'But, I don't want you to do that. I want a different Norma Desmond.'" And that's exactly what we can expect.

Asked if she had been intimidated by the role of the gloriously demented Norma, Clark replied, "I was not intimidated by the role, I was perplexed by it. I was not influenced by anybody else. You can't be, anyway. There's only one Glenn Close. But every woman who's played Norma has played her differently and there will be people who will say, 'No, I didn't like Betty Buckley,' or 'I thought Elaine Paige was the best.' You pay your money and make up your own mind. There's no one way to play Norma Desmond."

Had Clark seen the movie of Sunset Blvd., in which Gloria Swanson made her grand return? "I had seen the movie Sunset Blvd. when I was a kid, when it first came out, I suppose, and I had no idea what it was all about. I thought, 'Who are all these weird people?' It was too spooky for me. It was too adult for me and I didn't understand it. So eventually I said to the producer, 'Do you want me to see the movie?' and he said, 'No, absolutely not. I don't want you to be influenced by anything. If you want to see it at the theatre with Elaine Paige to get a feel for the moves, the sets, go ahead, but don't be influenced by her performance either. I told her to see the movie 40 times.' She actually sat through it 40 times during rehearsals." Whether or not we like her as Norma, Sunset will be an opportunity for Austin to witness the powerhouse that is Petula.

Norma: They've taken the idols and smashed them -- the Fairbanks, the Gilberts, the Valentinos. And who do we have now? Some nobodies.

Clark's legions of fans are rabid, brought together in a glorious communion on the Internet. Inevitably, there's an anguished message posted from someone who desperately needs the lyrics to "This Is My Song," and half a dozen people respond instantly, quoting the lyrics directly or sending a link to a site that has them. There is a distinct hierarchy to the fans -- from the casual observers who say, "Oh, I remember her," to the ones who not only remember her, but can tell you what she's done with every moment of her life since birth. The Petula Clark Forum on Yahoo.com, for instance, is a hotbed of debate regarding all matters Petula, with several self-appointed Petula professionals dispensing Petula information, engraving the Petula legend even deeper into our consciousness.

After Sunset closes, Clark's immediate plans are to sit on a beach for a month, but she is already hard at work on a one-woman, multimedia retrospective of her career, which is what those of us who treasure our memories of dancing to a 45 of "Downtown" all really want to see anyway. "But this will be more constructed," she tells us, "more autobiographical. I've written quite a lot of stuff for it myself, and it will go back to my childhood, what it was like growing up during the war. I will do Sondheim, I will do new songs, I will do songs in French, I'll do poetry which I've written, I'll do jazz, songs from the movies I've been in and other shows I've been in and obviously, I'll do all the Sixties songs." With the show being produced by one of the artistic directors at Cirque du Soleil, Petula muses, "I don't know if he'll have me singing 'Downtown' suspended upside down by one ankle, but that's the only way I haven't sung it." The tour opens in Montreal in October.