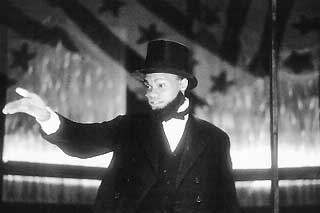 Forrest McClendon in The America Play

We cling to the idea that history can be recorded as fact, as truth, as something the historian can define. It could be set down in print, received by antenna, or passed down, individual to individual, with signs and language and even theatrical pageantry. But history can never really amount to anything more than a vague, tantalizing shadow world that invites the intrepid historian to try to find her way, to link clues together that might allow her an egress toward a dim, pre-dawn understanding from which she may continue her search. The search is never-ending. And this nebulous world of facts and truth and definition offers some willing participants the opportunity to link new ideas, to see inside history, and to shed a new, brighter light on what they discover. And many of us would gladly loosen our strangling demand on history that it tell the truth, if, in its retelling, it shed light on who we are. Or better yet, who we could be. So it is with two distinctly different plays now in performance at Austin's two major playhouses. At the State Theater is Deborah Hamilton-Lynne's one-woman play E Pluribus Unum: Barbara Jordan -- One Voice, an enthusiastic exploration of the personality and past of the legendary state senator, U.S. congresswoman, and teacher. It is a perfect complement to the fascinating and poetic Zachary Scott Theatre Center production of Suzan-Lori Parks' The America Play, a drama that (literally) unearths and re-examines some of America's most cherished myths of history. The plays share an overt and implied discourse on what it means to be black in America; they imbue their characters with hope, pride, zeal, and a desire to ask the perpetual historical questions: What made us who we are? And who could we be? Both plays have exceptionally strong casts with strong voices that, when in song, propel their audiences toward that light of pre-dawn understanding -- that history is something personal, something intimate, something that, even in contradiction, demands to be shared.

On a painstakingly detailed set that serves as the Texas Senate chamber in Austin and the House of Representatives in Washington, D.C., E Pluribus Unum unfolds in two acts. The first marks the occasion when Barbara Jordan sat as governor of Texas for a day -- the only time in the history of the country that a black woman has ever held so high an office. Jordan, played by a feisty, dominant, sometimes dancing Franchelle Stewart Dorn, arrives in dressing gown at her dressing table, already full of stories and anecdotes and thoughts and feelings about this momentous day that she is at pains equally to dignify and to enjoy the hell out of. The piece is a little bumpy at first, with too much unnecessary exposition, but soon the setup gives way to the storytelling and it's "catch me if you can" as Dorn races through humorous and sometimes moving stories of her youth, her strained relationship with her father, and some of the many people who believed in the strong-willed young black woman enough to help her make history as a Texas politician destined for the national stage. Through it all, Jordan points to her belief in the Constitution as her guiding principle, her pre-dawn light (even though when it was drafted, she insists, Madison and Jefferson left her out on purpose). That document made demands on the great woman all her life long: to do the right thing, to say the right thing, to represent her constituents, to represent her race, to make her family proud, to be proud of herself.

It is Jordan's connection to the Constitution that provides the fodder for the rather daring choice by Hamilton-Lynne to set the second act after Jordan's death and during last year's Clinton impeachment trial. The overriding dramatic question that allows for this choice is, "What would the great woman think?" And Lynne has plenty of verbal ammunition there, as Jordan helped draft the articles of impeachment for the impending trial of another sitting president, Richard M. Nixon, in 1974, when Jordan was a freshman congresswoman from Houston. Her steadfast impartiality (she voted to impeach Nixon not because she didn't like him -- reason enough, no doubt, for many of his political adversaries -- but because she believed he had committed a crime, and that was still a terrible and difficult decision for her to make) made her something of a hero. Now, ghostlike, she wanders the halls of Congress in the winter of 1999, amused, bemused, and sometimes downright pissed off at the perceived lack of respect for her beloved Constitution by those partisan politicians who hunger for Clinton's overthrow, no matter the inconsequential case against him.

That second act is problematic, bouncing from recent past to middle past to distant past as Hamilton-Lynne attempts to weave Watergate, the Clinton impeachment, and Jordan's personal life into something stage-worthy. Yet despite the frequent confusions this creates, the wonderful Franchelle Stewart Dorn continues her impressive journey through Jordan's memories and commentary, sometimes in soulful song, sometimes with a harangue, sometimes with a humorous touch. Director Sidney Brammer has helped Dorn create a buoyant theatrical version of Jordan, but has paid equal attention to the quieter, more private sounds of the great lady's great voice. In Suzan-Lori Parks' The America Play, director Dave Steakley hasn't so much a play to work with as a poem, a jazz riff, a curiosity shop. This stage piece is impressionistic and densely poetic, if just as proud and zealous in its ultimate optimism as Hamilton-Lynne's much more naturalistic drama. All signs point to it being a play about Abraham Lincoln with an African-American bent, but that is such an oversimplification of this rich theatrical work.

Act One begins on an enormous mound of earth where rests a little platform with a rocking chair. From here works the Foundling Father, a dead-ringer for Abraham Lincoln with the slightly obvious difference that he is black. With a complete set of beards for all of Lincoln's historical looks (including the aberrational blond beard -- not really worn by Lincoln but a source of comfort for the Foundling Father when stressed), he impersonates the President and, for a penny, will re-enact the assassination of Lincoln at Ford's Theatre, recreating Lincoln's pre-murder guffaw with puppet-like precision. His patrons fire at the Foundling Father, then race across the stage to shout historic words such as "Death to the tyrants!" that approximate John Wilkes Booth's utterance after that fatal shot, before shaking the Foundling Father's hand and bidding him a good day. These re-enactments we see between bouts of a long monologue in which we learn about the Foundling Father's entry into this profession, about Lincoln, about America and its icons.

Forrest McClendon is a brilliant performer; his Foundling Father is part circus freak, part circus barker, and an encyclopedia of the minutiae of history. He maintains his elegance whether respectfully nodding to the cardboard cutout of Abraham Lincoln or throwing himself into manic digging in that mound of dirt. McClendon digs up props and mementos, adding them to his Lincoln death act. As he repeats the assassination, McClendon sags some: He feels the weight of history and the dawning comprehension that this Lesser Known man will never be the equal of the Great Man.

Act Two encompasses the search by wife and child for the Foundling Father: He has died away from them, and they strive to find him. The mound of earth is an open grave in the second act, with an empty coffin nearby. Mother Lucy and son Brazil listen for the Father's voice and dig for clues in the earth. It is an act as musical and poetic as the first, with dialogue between mourning-clad mom and digger son intercut with sections of Echoes that take the story back to the night of the assassination of Lincoln, including scenes from Our American Cousin, the play Lincoln was watching when he was shot. Janis Stinson plays Lucy, circling the open grave with a tin hearing aid at her ear. Stinson is such a powerful presence, and when she opens up in song, she is just wonderful. Stacey Robinson is equally strong as Brazil: boisterous and animated, yet clearly yearning for contact with the missing father figure. Of course the trio are reunited, but not as neatly as one might imagine. Parks' poetry lends an otherworldliness to the entire play, especially the final reunion, and nothing, ultimately, is crystal clear. Sustaining the repetitive actions in the second act -- the uncovering of artifacts, the listening for dad's voice, the echo scenes, all in relentless poetry -- can drag.

But if the dialogue drags on occasion, Steakley and Dutch Rall have created an evocative and sometimes chilling sound design that incorporates a live stage echo to brilliant effect; and Michael Raiford's earth and lumber design is always the source for amusing and unexpected discoveries. This is a challenging piece of theatre, and one hopes that the Zach faithful, and the community at large, give it the attention of some of Zach's more commercial fare.

Both The America Play and E Pluribus Unum pulse with an underlying current of optimism. These two plays march in step with their theme of humanity superseding history, where being an American means opening oneself up to that pre-dawn light of possibility and opportunity, of family and fortune, of connections to deeper ideals and many voices, and of a past that cannot be captured in images restricted to black and white.