More Than a Pair of Jokers

The Sklar Bros. and How They Grew From Family Cutups to International Comedy Hot Shots 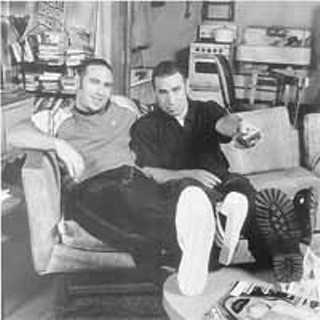 My cousins, the Sklar brothers -- the identical-twin stand-up comedians -- are coming to town for a six-day gig at the Capitol City Comedy Club. For me, of course, this is nothing short of amazing. True, they were always funny, always doing schtick. You can follow the evolution of their humor through the old family videos; they've certainly come a long way from the chest-clutching heart attack -- in the middle of the toast at my wedding. Even so, we all yeah, yeah-ed six years ago when they bagged their University of Michigan baccalaureates and took off for the Big Apple for a year to see if they could make it in stand-up before surrendering to law school. Actually, no one should have been surprised by this announcement, even from these two overachievers. Their brand of sophisticated, whimsical humor, which had nothing and everything to do with their twin-ness, really was a show that needed to be taken on the road. But for a while there, the de rigueur inquiry every Sunday morning call home to St. Louis was: "So, how are Jason and Randy doing?" The equally de rigueur answer was: "Well, it's tough up there, you know, they're struggling, but they have day jobs." Then, all of a sudden it was, "Get this: MTV gave them their own sitcom to write and star in." A few months later, the Hollywood Reporter loved Randy and Jason's Apartment 2F and opined that these cousins of mine might be "the Seinfelds of the late Nineties." Intra-family e-mails flew: Be sure to watch them on the Today show tomorrow; check out this or that sitcom next Tuesday or Wednesday -- they're on it. Apartment 2F didn't make it, alas, but little matter; they were now hosting a weekly show at NYC's legendary Catch a Rising Star club. Then they got a rave review in The New York Times. Last summer, my son turned on the TV in a hotel room in Verona, Italy, and started screaming, "Look, there's Jason and Randy! How do they know how to speak Italian?" There was their Apartment 2F, alive and well on Italian TV and dubbed in Italian. ("Oh, yeah," Jason deadpanned when I reported this to him, "we've always been big in Verona.")

Exactly what we were dealing with here was driven home to me when we were in New York about a year ago and arranged to meet the guys for a late-afternoon drink at some Union Square bar. The bar turned out to be this huge, happening scene -- even at three in the afternoon -- and when the twins walked in, heads turned and the Gen X crowd started buzzing. We chit-chatted for a while, and they told us that they were moving to L.A., they'd signed on with the illustrious Endeavor agency (of David Kelley and Adam Sandler fame). Later, as we were leaving, two twentysomethings jumped up and followed us out. "Hey, we're from St. Louis! You are, too, right?" one yelled. I reflexively turned to answer, "Yes!" and was about to serve the obligatory "What high school?" chaser when I realized, to my embarrassment, that it was definitely not me she was talking to.

Somehow, I don't see this law school thing ever happening.

Austin Chronicle: So, tell me, what ever became of that "law school thing," anyway?

Sklar Brothers: Well, compared to performing comedy and acting on TV and in movies, law school is certainly a far more exciting and riskier path. I guess you can call us a little traditional, because we know that by choosing the stable life of performers, rather than the high-glamour and unpredictable life of attorneys, we have copped out in some sense. We just couldn't do it. But we do applaud the few people in this great nation of ours who have decided to take that risk and become lawyers.

AC: You guys have been hanging together, inseparable, for as long as I can remember. What's the longest you two have been apart?

SBs: Well, we each went into different rooms for about 25 minutes to go over these interview questions privately. That's probably the longest.

AC: Do you ever fight or get sick of each other?

SBs: Of course we still fight. In fact, we still get into some fistfights. But whenever we get into a fistfight, we follow a set of unwritten, unspoken rules. Rule No.1: If one person is continuously pummeling the other for longer than 30 seconds, he must stop immediately, back off, and let the other person pummel him. Rule No.2: No hitting about the neck and face, that area is our meal ticket. Rule No.3: Fight promoter Don King receives 36% of all profits.

AC: How would you describe your comedic style and delivery?

SBs: Well, it's an interesting one. It's been described as a tag-team delivery -- like the raps of the Beastie Boys -- as there really is no straight man in our act. We sort of lampoon many of the ridiculous goings-on in the media. Some people have called us Jewish Jackie Masons.

AC: Do your parents get your comedy?

SBs: Our parents do get it and they like our comedy, but our mom has the same comment every time she sees us perform. She always asks, "Why do your have to curse? You don't have to swear to be funny. Let me tell you something, Eddie Murphy never swore and he was very funny." So I'd say for the most part, they get it.

AC: How does the L.A. scene compare to the NY scene?

SBs: New York was a great place to develop our craft: stealing purses. Actually, New York provided plenty of live stage performance opportunities. There are about six great comedy clubs in New York, and any given week we would perform between seven and 10 times. Some nights we'd perform in one club, then hop into a cab and race across town to make our second gig of the night, then jump into another cab and race downtown to hit our third spot of the night, and then back up to the first place. And then after all that, we'd go out with our friends until five in morning. It was amazing. In L.A., there just aren't the same stage opportunities. However, Los Angeles provides so many more opportunities for film and television work. This is where the industry truly resides. And as a result, there are many more auditions and opportunities to get involved in the big and little screen. New York is a night culture, L.A. is a day culture.

AC: Are you excited about coming to Austin?

SBs: Yes, Austin has been like a second home to us.

AC: But isn't this your first time here?

SBs: Yes, it is. We said second home. Seriously, we can't wait to come to Austin. It should be a great week at the comedy club. Our feature act, Jordan Rubin, is a writer for The Man Show on Comedy Central and has performed on the Louie Anderson HBO Comedy Showcase, and at the Aspen HBO U.S. Comedy Arts Festival and -- oh, yeah, he's hilarious. But most importantly, someone said we might make it into the sequel to the movie Slacker -- Slacker 2: Electric Boogaloo. The camera follows around several break-dancers as they walk around Austin trying to save their beloved recreational center. Let those kids dance, dammit!

AC: I've got to ask you this, it's been bothering me for a long time: What would our Grandma Rose think about what you guys are doing with your lives?

SBs: Our late, great Grandma Rose would no doubt say, "That shit's off the hook, yo!" Oh, whoops, that's Snoop Dogg. We're always getting the two of them mixed up, they were actually great friends -- they used to play mahjongg on Thursdays.

AC: Now that I've got you on the hook, there's another question I've always wanted to know the answer to: What do you really think of our family? And me, as a cousin?

SBs: We think you guys are great. When we were growing up, your parents were our only relatives in St. Louis; therefore, we spent every holiday, birthday, and anniversary together. We have a lot of great memories sharing all of that stuff with them.

Now you and your brother Jan, on the other hand, were a different story altogether. We loved to watch the two of you fight whenever you were both in town. It inspired some of the great fights we have had with each other over the years.

But really, I think what we've admired most about you as a person over the years is your refusal to engage in nepotism of any form. (Make sure that gets into the article; come on, you can do it for us, we're family.) And we'd say you're definitely in our top 75, as far as cousins go.