The Rise and Rise of Daniel Rocket: Are we going to be tested on this? 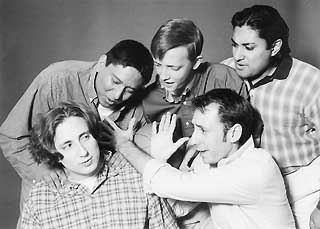 The Rise and Rise of Daniel Rocket: Are we going to be tested on this?

"People always grow up to be different people ... better people," the repressive teacher squawks. But nothing in this Different Stages production about a flying junior-high misfit named Daniel Rocket suggests this to be the case. Each cast member, almost without exception, saunters onstage a 12-year-old lout and strides off a 32-year-old lout. The moral-apparent is best summed up in the hero's line late in the play: "Things have a way of being the way they are." The way they are, we are led to believe, is crappy -- in junior high school and in the 20 years to follow, when all that's left is the licking of wounds and the plotting of revenge.

With the moralistic ostentation of a mid-Eighties After School Special and the defeatist world view of a Raymond Carver short story, The Rise and Rise of Daniel Rocket has as its intended audience a mysterious demographic, frightening to imagine. Too confusingly pedantic for adults, too unremittingly dreary for children, The Rise and Rise ... contains life lessons so bleak and vague, they provoke the equally miserable question: Are we going to be tested on this?

In the first act, playwright Peter Parnell and director Karen Jambon plunge us back to the junior high school playground and leave us there for an hour to witness the wrenching hell of it all. Daniel Rocket, the brilliant school oddball, is portrayed in a fashion appropriate to the tone of the production (depressed, awkward) by John Hashop. His classmates mock him for sport, and Alice (Jenni Rall, the only lead who convincingly makes the child-adult transformation), the girl of Daniel's dreams, is in love with Daniel's fairly loyal but terminally wussy best friend Richard (Brian Richard). Everyone makes fun of Daniel because he thinks he can fly. When it turns out he can indeed fly, he might be getting a little more popular, but instead runs away to become famous.

When Daniel returns to his old hometown (never a good idea) 20 years later, having achieved fame and fortune abroad, he finds that nothing has changed. The bully-louts are still bully-louts. The cute shallow girl is still cute and shallow. Daniel is now a celebrity in their eyes, but he's still too different, too sensitive, too weird to ever fit in. And the tacit message is that even the ability to fly will not save you. You will still not get the girl. You will still be miserable. You will still be alone and misunderstood. And should you happen to plummet off a cliff in a climactic scene, your stupid former classmates will pick you up and carry you through the streets without the benefit of a stretcher.

Plot points rear up endlessly and disappear without resolution. One example is an unseen seven-year-old child, Daniel's godson and namesake, the implicit heir to Daniel's gift for flight. Little Daniel is discussed meaningfully for several scenes and then entirely forgotten. Not only is the chain of events sketchy, but the one thing this show, full of 25-year-old preteens and miracles, so desperately needs -- suspension of disbelief -- never materializes. It doesn't help that we never find out where we are geographically or what era we're in. It's hard to believe these are modern youth; kids today run Internet start-up companies. Here, the girls pass love notes in class and the boys tell each other their latest sex dreams: "Where'd you kiss her?" "Everywhere! A lot!"

One disbelief-suspending strategy, common to cult leaders, is the ceaseless cacophony of affected (first preteen and then thirtysomething) voices. There's no respite, even during scene changes, which consist of endless rearrangements of several large wooden boxes. These changes are set to not only the likes of Tom Petty's "Learning to Fly" and Elton John's "Rocket Man," but also incessant chatter from the cast, who stay in character and have irrelevant conversations while making a huge deal of the wooden boxes' reconfiguration.

For anyone who was indeed a misfit in junior high, be warned: This play offers neither John Hughes-ian vindication, nor Degrassi Junior High's hard-hitting empathy. According to Rocket and company, life at 12 is bad and it doesn't get any better. A few things ring true, such as the fact that everyone gets mad crushes on the least worthwhile people, but in general lines like "If they want to be friendly, why are they always laughing at me?" are nothing but hollow and squirm-inducing. Here in Rocketland reigns a hideously banal emotional tenor, best evidenced by the reality bite surrounding Daniel's first flight. The bullies are all set to beat Daniel up, but when they see him airborne, they're set to gawking: "Wow, he really can fly .... " Pause for astonishment. Then the baseball-bat-wielding mob returns to its senses and runs off in the direction of the school to the battle cry: "We'll get him when he lands!"