Long Fringe @ the Off Center

Long Fringe performances will be held primarily at The Hideout, 617 Congress, and The Off Center, 2211-A Hidalgo. Two additional productions will "bring their own venues." Following are schedules for Long Fringe@The Hideout (pp. 2-3), Long Fringe@The Off Center, shown here, and Long Fringe - Bring Your Own Venue! (below, far left). A Short Fringe schedule is on p. 8. Times and ticket prices vary and are listed in the schedules. Reservations are strongly recommended to avoid disappointment.

David Hare spawned a Broadway sensation last year with his modern variation on Arthur Schnitzler's La Ronde, and while most of that may have owed to the spectacle of Nicole Kidman in the buff, Hare still managed to prove that there's a lot of dramatic fire left in the sexual dance of couples. Teatro Humanidad provides the local premiere of Hare's play as an introduction to its new "Maestro Series," which seeks to take modern classics and present them from a bilingual, Latino perspective. Starring in Teatro's Blue Room is company artistic director Amparo Garcia Crow. Directing the show is Tongue & Groove Theatre artistic director David Yeakle, who will no doubt bring his trademark flair for imagination, physicality, and comedy to the production. In conjunction with The Blue Room, Teatro Humanidad is also staging an adaptation of La Ronde (see below).

One to the Right

Wedding plans go awry in this locally produced update of a classic commedia tale. Ruffiana is a retired madame with a mind to marry her daughter Isabella to a man of wealth and power so she can stay solvent. The feminist Isabella -- none too fond of the scheme -- plots with her servant Columbina to foil mom. But then the mad scientist Dottore shows up with his hormonally imbalanced son Flavio and their crafty servant Brighella. When they all meet, people start falling in love right and left, and everyone is out to woo someone else and foil someone else's attempt to woo that person. The farcical entanglements of commedia are the specialty of this small production company, which has been keeping alive this grand comic tradition in local productions at Club DeVille and Movements Gallery this past year.

Written and Performed by: Phillip Owen 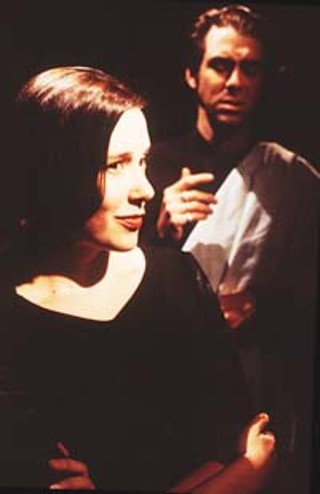 The Messiah Formerly Known as Jesus

A roadside stop late at night prompts an internal odyssey for a young man in this solo show by Philllip Owen, which had its premiere earlier this year at MOMfest '99. As he's returning home from a camping trip late one evening, Homer nods off one too many times and ends up running his truck off the road. Shaken, he stops to consider his situation, which leads into a series of vignettes, stories, and adventures working in the framework of The Odyssey. Homer tackles some big questions: What is "home" and how do you know where it is? Why is it that you mostly realize where your home is when you are away from it? Why do lightning bugs light up like that?

In La Ronde, playwright Arthur Schnitzler captured the sexual dance of couples, jumping from partner to partner, in a form that has entranced and entertained audiences for decades. Now, in this Teatro Humanidad production introducing the company's new "Maestro Series," which seeks to take modern classics and present them from a bilingual, Latino perspective, that dance is literalized. Director Maria Aladren (Pegasus51/Theatre) sets the play in Buenos Aires and uses the tango to interlace the daisy chain of sexual liaisons. In conjunction with La Ronde, Teatro Humanidad is also staging an adaptation of The Blue Room (see above).

The Messiah Formerly Known as Jesus

An untold tale of Jesus, set during his days in the wilderness prior to beginning his ministry. But as this is the Gospel according to the KAiROS! Co., a local team of irreverent satirists, don't expect it to look anything like the work of Matthew, Mark, Luke, or John. Playwright Richard Hinojosa (Obsessively Sam) puts Jesus in the company of the Frog, a wise old hermit who attempts to start the carpenter down the path to messiah superstardom. Along the way, Jesus must relive the troubling mishaps of his grade school and college years (including an affair with a certain Mary Magdalene). While not everyone appreciates satiric messing with the Messiah, those with a tolerance for it may find some big laughs here; KAiROS! have been including Jesus-based material in its sketch shows for years, and it's among their most polished work: sharply focused, cleverly playing off the tension between Jesus' divine and human sides, with some wickedly funny characterizations.

Produced by: Piece of the Pie

Jean Paul Sartre's existential view of hell as a prison within, and created by, ourselves and those around us may have lost some of its novelty since it debuted almost a half-century ago, but in performance it can still chill us to the marrow with its portrait of a psychologically devastating existence. No sleep. No food. No view. No escape from yourself. An eternity of nothing but what is within you, an eternity of stewing over one's shortcomings.

We Won't Get Into That Story

In this tale of connubial questioning, playwright Samson gives us a woman on the verge of marriage who is beginning to question that major step. With the help of her friends, she discovers that it is the men she has loved, and the men she has loved to hate, that have brought her to this point. Will this knowledge help or hurt as she makes the most important decision of her life? Samson was a participant in FronteraFest '98.

We Won't Get Into That Story

Lessons From the Journey

Produced by: Poetry in Motion

A collection of life's lessons told through poetry, percussion, acting, and dance. Lessons From the Journey incorporates diverse social elements which highlight our frailties and strengths, and asks us to examine depths of reality in spite of our perceptions. It is the focus of this project to encourage our audience to take stock in the self and to fulfill individual and shared dreams.

The United States Theater Company offers two examples of the dramatic genius of one of the country's most underappreciated playwrights. Romulus Linney has never had a hit play on Broadway, but off the Great White Way and in many far-flung corners of the country, his works are prized for their lyricism, their humor, their rich sense of history and locale, and, most of all, their incisive insight into the human spirit. This double bill offers Linney's surprising look at a second-rate creative writing class in F.M. and in The Love Suicide at Schofield Barracks, a gripping military investigation set against the backdrop of the Vietnam War. The ACC Dance & Drama Department is also presenting works by Linney in the festival (see below).