(l-r) Jennifer Griffin and Ryan Cutrona in The Lesser Magoo

"Baby, you don't get more Bottom's Dream than this," responds Mitchell Gossett when asked about the production of Erik Ehn's chokecherry that this exceptional Los Angeles theatre company is bringing to town for FronteraFest 2000. "James Martin, the director, co-founded Bottom's Dream with [me. I am] in the cast. Both founding artistic directors will be in Austin for the performances." Furthermore, the traveling group includes actresses Jennifer Griffin and Bonita Friedericy, both company veterans: Griffin is appearing in her sixth show, having just portrayed Clytemnestra in the Bottom's Dream production of Ruth Margraff's The Elektra Fugues last spring; Friedericy played Dot in the highly acclaimed Bottom's Dream production of Mac Wellman's 7 Blowjobs in 1993. "This is the core of Bottom's Dream," says Gossett, "And we will all be in Austin."

And it's about time, too, as Bottom's Dream has been a haven for Austin theatre artists (and some of our favorite new playwrights) traveling the West Coast for a number of years now. 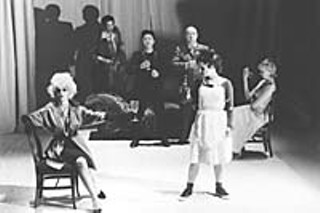 Gossett first came into contact with Austin theatre at the original RAT Conference in Iowa City in December 1994. This was the gathering that first brought together some of America's brightest -- but not richest -- theatre companies, almost all of them working under the radar of the often staid and mostly institutionalized national theatre scene with its League of Resident Theatres structure. Spurred by playwright Ehn's notion of a national artists' hostelry as a way to share work across the country without breaking a theatre's bank, representatives of about 20 of these largely vagabond, kindred groups met on the University of Iowa campus to discuss and activate greater collaboration among them. Five Austin theatre companies were represented in Iowa City: Salvage Vanguard Theater, Frontera Productions, Physical Plant Theatre, The Public Domain, and then-independent producer Don Howell, who helped organize the Austin contingent. The Annex (Seattle), Woolly Mammoth (Washington, D.C.), the Undermain Theatre (Dallas), The Living Theatre and Thieves Theatre (both from New York City), Sledgehammer Theatre (San Diego), and Ehn, among other individuals and groups, were all there.

Gossett attended as the representative for Bottom's Dream, a talented and forward-thinking theatre company from Los Angeles that prided itself on producing bold new works by American playwrights, as well as seeking out like-minded companies across the country to exchange ideas, plays, and, occasionally, personnel. The Iowa dialogues led, naturally, to Bottom's Dream becoming a West Coast base for out-of-towners sharing their work, and that included some of Austin's envelope-pushing companies.

Following his trip to Iowa, Gossett and Bottom's Dream dove right into a process of collaboration and exchange that has been colored by many Austin connections. They hosted Salvage Vanguard Theater during its West Coast tour of David Bucci's original play Kid Carnivore, then had Bucci and Salvage artistic director Jason Neulander back to L.A. for the West Coast premiere of Bucci's Altamont Now, as part of the Sun and Moon Press contemporary drama reading series. They've been one of the West Coast's leading proponents of the works of playwright Ruth Margraff, newly relocated to Austin (Salvage just staged Margraff's The Cry Pitch Carrolls). And Bottom's Dream has exchanged ideas and mutual admiration for other Austin companies like Frontera and the Rude Mechanicals: "These are all core artists for BD," explains Gossett, "and we want to share our work. We like connecting ourselves to Austin theatre." 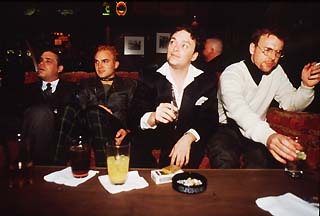 Gossett and company also credit Austin's theatre groups with providing a model of theatres working together in a mutually supportive environment that he believes "helped spur an exciting renaissance in the Los Angeles theatre community." Upon visiting the city for the 1996 RAT Conference, held in various theatres about town, he "was really impressed, really impressed ... with the tight community of Austin theatre. So much so that I have used the Austin theatre community as a model for Los Angeles theatre over and over again. Most recently with the Los Angeles Times and a dialogue we have been having here in L.A. with the press."

In addition to Margraff, the stable of playwrights that Austin theatre and Bottom's Dream share a passion for includes Erik Ehn, whose Big Cheap Theatre ethos has been the connective tissue for this nationwide body of groundbreaking, alternative theatres. Ehn's work has been seen in Austin more frequently: Anarchy in the Oklahoma Kingdom and Wolf at the Door were produced a few years back and, more recently, Frontera@Hyde Park has staged a pair of Ehn's poetic, socially probing plays: the roaming Enfant Perdus in 1996, and just this fall the commissioned work Heavenly Shades of Night Are Falling. With so much in common, it just plain makes sense that Austin gets a look at Bottom's Dream in action.

So welcome the intrepid Los Angeles company as it premieres its own commissioned Ehn play, chokecherry, at this year's FronteraFest, February 3-5, before returning home for its Los Angeles run.

"We just want to be a part of the [Austin] scene," continues Gossett, "even if only for three performances. Plus, we like the idea of premiering [Ehn's play] in Austin before its Los Angeles run two weeks later. Austin audiences will see what Los Angeles considers one of its best new-work theatres doing a world premiere."