Long Fringe performances will be held primarily at The Hideout, 617 Congress, and The Off Center, 2211-A Hidalgo. Two additional productions will "bring their own venues." Following are schedules for Long Fringe@The Hideout (shown here), Long Fringe@The Off Center(pp. 6-7), and Long Fringe - Bring Your Own Venue! (p. 6). A Short Fringe schedule is on p. 8. Times and ticket prices vary and are listed in the schedules. Reservations are strongly recommended to avoid disappointment.

Hole in the Bucket Mississippi on my Mind

The dramatic account of a husband and wife's 30-year love affair with the same woman, told in words and music. Author Emily Cicchini has long been known around town for her playwriting skill (the award-winning script Becoming Brontë, the short play Art Beat, a "Best of" selection in FronteraFest '99), but it's only been in the last year that this theatre artist has let Austin know that she's also a performer. Last spring, she appeared in the collaboratively written Frontera production Alaskan Heat Blue Dot, and she also takes the stage to relate this very personal tale -- the couple in the story are her parents. This is Cicchini's first solo work, and helping guide her through is one of Austin's top directors of solo material: Christina Moore, who has helped shape Steven Tomlinson's Managed Care.

Comedy double bill featuring Austin comedy scene regulars Ray Prewitt and Cynthia Ethel Wood. Both comedic actors belong to the improvisational comedy troupe named after Prewitt, Ray Prewitt's 4th Grade Class, which showcased at the most recent Big Stinkin' Improv and Sketch Comedy Festival. In his half of the bill, The World Owes Me a Party Favor, Prewitt lets us know where the party is, was, and will be. Wood -- who is also a 10-year veteran of Esther's Follies, the creator of the performance piece Saints, Martyrs, and a Donkey Angel, and one of the city's most gifted comedy presences -- presents The Shaft, "a journey much like 'live taxicab confessions' sans the taxi and release forms."

Written, Performed, and Directed by: Liz Gans and Tiana Hux

Using the chakra system as their source, performance artists Liz Gans and Tiana Hux present what they consider to be evidence of faith. Separately, Gans and Hux made quite an impression in FronteraFest '99, Hux with Yes/No, an intriguing audience survey chosen "Best of the Week" and Gans with The Trash Burner, which was selected as a "Best of the Fest" piece. This full-length collaboration between the two is their third under the heading of Energy Theatre, a three-part event in which they explored the chakra system as a generator for new work.

Mississippi on My Mind

Written and Performed by: Suzanne Vance

A triptych of life in the Deep South: I Got Places, a dialogue between two elderly homeless people; Have Your Cake and Eat It Too!, a monologue in which a middle-aged Dixie queen recounts her humorous activities on the dating scene; and Front Porch Memories, a poetry performance which re-creates a Southerner's experiences growing up in a world slow to change. Author-performer Vance is one of those canny veterans of the festival, an artist of limited experience -- she claims to have been at the writing game only five or so years -- who takes the Fest stage whenever possible to introduce new pieces and further develop her theatrical sensibilities. Her often folksy approach, deep-fried in Southern humor, have developed a loyal following.

Written and Performed by: Grisha Coleman and Daniel Jones

Two of the most esteemed featured artists from past FronteraFests return to collaborate on a "a newly discovered celluloid bombshell" featuring two entertainments legends in a "previously unseen" collaboration. Frontera company member Daniel Alexander Jones and Hot Mouth founder Grisha Coleman are Cab Calloway and Lena Horne -- but don't assume that you know who's playing who! Jones' sensual, funny, lyrical contributions to Frontera -- Blood:Shock:Boogie, Black Power Barbie in Hotel de Dream, Ambient Love Rites, clayangels, et al. -- brought an infectiously jazzy poetry to the Hyde Park stage. In her evening of songs at FronteraFest '98, Coleman bared her heart through her voice and cello, and hypnotized a roomful of Austinites. Watching and listening to these two hot talents take on the combustive Cab and Lena promises festival fireworks.

Stories To Be Told

Argentinian playwright Dragun has won international attention for his dramatic fables of poor people faced with moral dilemmas, the consequences of which are sometimes fantastical (as with the man who, forced to take a job as a watchdog, begins to turn into a dog). Pegasus51/Theatre -- a company that has appeared previously in FronteraFest and in MOMFest -- presents this social commentary stripped to the theatrical essentials: a single set piece, a unifying costume, and sound and movement provided by the human body. Combining elements of Brecht, commedia, vaudeville, and clown, the company strives for "drama as a clean ink sketch: no extra lines, no embellishment, but one continuing line communicating the oh-so-very-necessary story."

Tell Me About Amelia 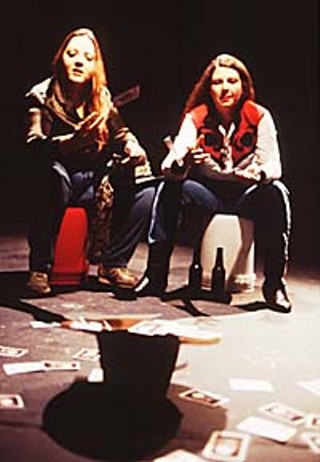 Tell Me About Amelia

The effect one person can have upon another and the quickness with which one's life can change are explored in this script by John Daniels Jr. "Tell me about Amelia," he asks. "Do you know her? Has she changed your life? Have you changed hers? If you had never met Amelia, would you have lived your life differently? Has she lived a different life because of you? I think so. Life can change in an instant. Snap! I can see her dancing in the dark. You have a story. Tell me about Amelia." This production follows Daniels' previous foray into local theatre, the flashback musical Sirens-N-Aquarius, staged last summer at the John Henry Faulk Living Theatre.

Adapted and Directed by: Guy Roberts

Produced by: The State Theatre Company School of Acting

"Something wicked this way comes" as the State Theater Company's School of Acting offers a new adaptation of the Bard's tragedy of bloody ambition. Guy Roberts, who proved himself a savvy director of Shakespeare with last summer's State Theater Co. production of The Taming of the Shrew, stages this Macbeth, with his Petruchio from that effort, Steve Shearer, in the title role, and Babs George as Macbeth's lethal lady. Joining them for this "nightmare of chaos, witchcraft, and murder" are Austin Shakespeare Festival artistic director Paul Norton, State Theater Company regular Dirk van Allen (The Young Man From Atlanta), Subterranean Theatre Company favorite David Stahl (The Collection), The State's Kate from its recent Shrew, Andrea Osborn, and Patricia Pearcy. All proceeds benefit the State Theater Company's School of Acting.

Written and Performed by: Steven Tomlinson

After having thought through the Y2K problem, Austin's favorite monologist is back with a meditation on real estate and romance. Steven Tomlinson is the witty and winning playwright-performer whose "Cost of Living Trilogy" -- Free Trade, Managed Care, and Millennium Bug -- was one of the great achievements of local theatre in the Nineties, a captivating blend of economic theory and personal reflection, witty social critique and lyrical poetry. Curb Appeal, staged here as a work-in-progress, finds the ever-perceptive Tomlinson searching for shelter in a hyperactive real estate market, where he draws parallels between the house hunting and dating scenes. "Every house that excites you is a fantasy of what your life could be," he discovers, but when you contemplate signing on to a house for life, as with human life partners, you have to confront your fear of commitment.

A chamber piece with notes of loneliness, lust, sorrow, and South Dakota, accompanied by mythic resonance from Dante's Inferno. Ehn, the gifted poet-dramatist who penned Heavenly Shades of Night Are Falling and Enfants Perdus for Frontera, here sings the tale of a Los Angeles schoolteacher who wants to adopt a student with serious disabilities. Their subsequent journey together takes them through the deep dark lake of sorrow. Interpreting Ehn's no-doubt vividly imagistic script is Bottom's Dream, one of Los Angeles' leading theatres of new plays and, with local companies Frontera, Public Domain, Physical Plant, and Salvage Vanguard, a founding theatre of the RAT movement. With work that's been dubbed "A scientist gone mad in the laboratory of language" by the Los Angeles Times, Bottom's Dream brings one of the most eagerly anticipated events to this year's festival. (see "Bottom's Dream," below)