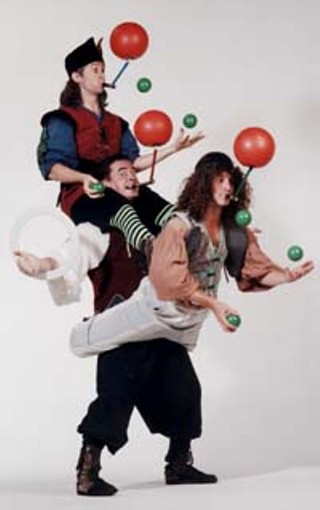 Watching someone make a bologna sandwich with his feet may not be your idea of high entertainment, but perhaps that's because you haven't seen it done by a Flaming Idiot. As performed by Gyro, the least tall and most talkative member of this Texas juggling trio, the novelty act is no mere gross-out gag. There is obvious care in the way this gentleman's soap-dabbed soles lather each other prior to the culinary escapade; a real delicacy in the way his toes pluck two slices of bread from a loaf and lay them on a paper towel, then lift a slice of bologna from a pack and deposit it upon one slice of bread, artfully peeling the sausage wrap from the side; uncanny skill in the way the soles, a bottle of French's mustard in their grip, squeeze lines of the yellow condiment onto the bread; uncommon precision in the way the toes of one foot draw a knife from a block and lay it across the sandwich at a diagonal while the sole of the opposing foot provides enough gentle pressure atop the blade to push it down through the sandwich, producing two perfect right triangles. To see a bologna sandwich assembled thusly is to see one man's feet which are more sensitive and artful than most of the attendees at an Iron John poetry slam. And when combined with the ongoing comic commentary from Gyro and his partners, this otherwise ordinary kitchen activity becomes high entertainment indeed.

But then that's the Flaming Idiots way. Gyro, Pyro, and Walter -- the performance alter egos of Rob Williams, Jon O'Connor, and Kevin Hunt, respectively -- have built their 15-year career on taking unlikely activities such as balancing a bicycle on one's chin, stuffing a two-foot-long balloon down one's gullet, and juggling burning torches, and making them the stuff that one would pay to see and pay cheerfully. They've succeeded in this -- first as entertainers on the Renaissance festival circuit and now as ar-tistes on legitimate stages such as the Zachary Scott Theatre Center's -- by mastering whatever it is they choose to do, be it wriggling out of straitjackets or juggling fire atop the shoulders of a hapless audience member, and presenting it so offhandedly, spiced with such comedic flair, that the act appears effortless. Or magical. Or both. In this, they are members of the old school, the prestidigitators and performers of skill from vaudeville, who took pride in the precision of their acts and honed them to a razor's sharpness. While the Flaming Idiots' act maintains a loose, improvisatory air, with much fun made of the members' inability to get certain tricks right, it's clear that the Idiots themselves are seasoned pros with too much pride in what they do to leave much to chance. You feel you are in the hands of people who love what they do and are so good at it that if they toss you through the air -- however wildly -- they will not let you fall.

That sense of assurance, together with the relaxation brought on by the trio's abundant humor, puts you so at ease that you take in the show like a kid: agog with wonder at every seemingly superhuman feat of skill, a-giggle with every supremely silly joke and bit of slapstick schtick. And while that's an indicator of the fun in store for adults, any real kids are just as likely to appreciate going along for the ride; the Idiots play to all ages, with the occasional stunt even tailored to the grade-school set. You and your seven-year-old -- or 17-year-old or 70-year-old -- will mouth at least one big "wow" together, and maybe many.

While the show is the Flaming Idiots, the Zach production adds several pleasing accents. Heyd Fontenot's stage setting, with its crimson curtain and circus graphics, gently tosses us back to the days of old-fashioned carnival sideshows and theatres with dozens of variety acts. Allen Robertson's musical score complements the Idiots in the way Carl Stallings' work used to do for the Warner Bros. cartoons, with witty riffs on popular melodies, loopy sound effects, and its own comic commentary. And the musicians here -- John Howrey, Arnie Yañez, and Thomas Nuendel -- sound it out with an insouciance worthy of Spike Jones. All of it plays off of -- and builds on -- the Idiots' peculiar and most pleasing sense of fun.

And fun is what this show is all about. You'll laugh, you'll clap, you'll hug your neighbor, and certainly you'll believe a man can make a sandwich with his feet.