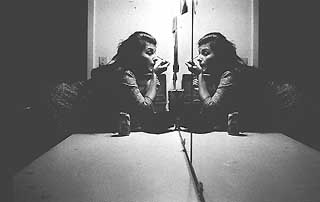 Heavenly Shades of Night Are Falling 2

Sarah Richardson gets a head-start on her make-up for Heavenly Shades of Night Are Falling; she's the first cast member to arrive. "I'm really nervous if I'm not there early," says Richardson. "I'm never nervous when I'm performing. Being onstage doesn't make me nervous. But the idea that I'm not prepared makes me really, really nervous." Among her other performance traditions: "I always say my first line before I go onstage. I try to go over all my lines beforehand, but I always say my very first line right before I go onstage, just so when it comes out of my mouth, I don't scare myself. I always stay within earshot of the stage. I'm not one of those actors who can step outside for a cigarette or something. I'm convinced I'm gonna miss my entrance. Even if I'm not going on for another hour. I can't go onstage without having had a Diet Coke. Coke, chocolate, cigarettes. I do all the things you're not supposed to do. But I feel like if I don't do them, I'll go into a coma." By the way, don't even think about saying the name of "the Scottish play' around Richardson during a show. "I'm a Nazi about that," she says. And with ample reason. She was in a production in which an actor thought it funny to defy the tradition and said "MacBeth" repeatedly in the theatre. During the run, one actor had an accident while riding his bike to the theatre and wound up with a concussion. Another ruptured a disc in his back. After that, the cast did "every ritual we could think of to cleanse the stage." This Is Who We Are #11: Frontera@Hyde Park Theatre's blood pudding
A daily affirmation of Austin's creativity from the Chronicle archive