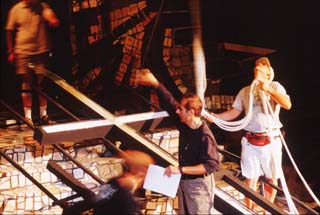 Musical theatre isn't exactly renowned for theological discourse. Once you get past Tevye's one-sided chats with the Almighty and Maria's angst about abandoning a life in the convent, the exploration of humanity's relationship to God gets pretty scarce. I suppose it isn't all that easy to set a jaunty melody and snappy lyrics to a meditation on original sin. That said, there was one brief period when musical theatre actually tackled theology head-on. It was in the early Seventies and involved only a few works, but two of the boldest ones not only broached spiritual issues in popular song, they even made a musical leading man out of one of the most unlikely figures in all history: that carpenter from Nazareth, Jesus. Those radical musicals? Jesus Christ Superstar and Godspell.

Now, from our vantage point almost three decades later, the thought of Godspell and Jesus Christ Superstar as innovative or challenging may seem odd. After all, both musicals have been embraced by the mainstream for so long as to be considered classics of the art form. Still more telling is the fact that for more than 25 years these shows have been staples of not just regional and community theatres all across the country, but high schools and Christian youth groups to boot.

Nevertheless, when the two works debuted, they marked real departures from the musical theatre norm. Like other pioneering musicals of the time, such as Hair and Company, Godspell and Superstar eschewed the form's popular conventions -- boy-girl romance, comic subplots -- to explore social issues and larger themes. While they weren't the first musicals to treat the form or its subjects ambitiously, they were part of a movement that actively worked to expand what musicals could be and how they could be staged.

Given the tradition of romance and comedy in mainstream musicals, it was a helluva shift from The King and I to the King of Kings. But the creative teams behind these works -- John-Michael Telebak and Stephen Schwartz for Godspell, Tim Rice and Andrew Lloyd Webber for Superstar -- made it work in part by revamping the subject to suit the form and, more significantly, by revamping the form to suit their vision of the subject. Schwartz and Telebak abandoned the historical take on Jesus in favor of the metaphorical: Christ as holy fool, in a Superman T-shirt and a face smeared with clown white. With the feel of the circus about their hero, the musical makers could draw from an eclectic range of musical styles, from vaudeville to modern pop.

Rice and Lloyd Webber may have taken a more traditional approach to Jesus' look, but theirs was still the more radical of the two musical theatre takes on the carpenter. The reason? Two words: rock opera. Superstar was sung-through, a common feature of musical theatre on classical stages but in 1970 still a rarity on the contemporary scene; that shook up some audiences. But the "opera" part of that defining phrase didn't shake them up nearly as much as the "rock." The driving drumbeats, the screaming electric guitars -- this was not the stuff of true musical theatre. It scorched the ears of a generation reared on the fluid melodies and lush orchestrations of George Gershwin, Richard Rodgers, Leonard Bernstein, Alan Jay Lerner, and Frank Loesser. And rock music about Jesus? The combination made Superstar at the time seem doubly impertinent.

Of course, 30 years on, the edginess of those days borders on nostalgia, like a fiftysomething's wistful memories of being dragged from a sit-in by a pair of Establishment "pigs." Communicating the pioneering qualities of Superstar to a modern audience are all but impossible after so much time, after audiences have seen the show's creators go on to produce Cats, after musicals have gone on to embrace throat-slashing barbers and transsexual East German rock stars? So how do you stage Superstar now? How do you get a Superstar that breaks out of the comfort zone?

If you're Austin Musical Theatre (AMT), which opens its production of Jesus Christ Superstar on November 30 at the Paramount Theatre, you take your cue from the rock opera's second line, wherein Judas sings: "If you strip away the myth from the man, you will see where we all soon will be." In the musical, the line is Judas' way of cutting through what he sees as hype regarding Jesus as the Messiah. But directors Scott Thompson and Richard Byron found in the words a way to approach both the work and the figure whose life it dramatizes. 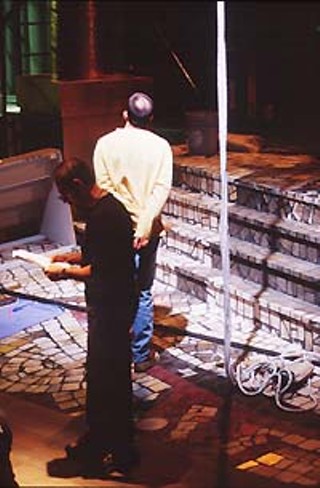 As they began developing ideas for a Y2K JC Superstar, the two AMT leaders were conscious of all the history and images that have built up around the piece from its various incarnations: the original 1970 concept album; the glitz-heavy Broadway production the following year; the 1973 Norman Jewison film; the 25th Anniversary Tour, which reunited Carl Anderson and Ted Neely from the film two decades prior; and the recording Jesus Christ Superstar: A Resurrection, in which Indigo Girls Amy Ray and Emily Saliers led an all-star cast of Athens, Ga., musicians in a Nineties-era Southern-fried revamp of the score. More than most musicals, the associations with the various versions seemed to characterize the work itself, sometimes making it seem more intense by virtue of vibrant performances or dynamic visuals, other times sapping it of energy and making it seem either a campy rock & roll counterpart to Hollywood's Biblical epics of the Fifties or a relic of the Era of Protest, decades out of date and empty of relevance. Thompson and Byron saw their best hope of creating a Superstar with drama and urgency was to peel back all that accumulated history and rediscover the story at the heart of the Rice-Lloyd Webber Passion play.

So they stripped away the productions from the text and rediscovered where Superstar is coming from. Perhaps their most important cues came right from the opening number, "Heaven on Their Minds." It is sung by Judas, and that by itself said a lot, reminding them that the show is drawn largely from his perspective, that it's Judas who sets the tone for what is to come by telling us here what he thinks of Jesus' mission and how it's perceived by both the Israeli populace and the Romans in power. Here, Judas lets us know that he doesn't buy into the rabble's claims of divinity for Jesus. "They think they've found the new Messiah," he sings to the man he follows. "And they'll hurt you when they find they're wrong." He goes on to chastise Jesus for ignoring what may be the story's most crucial element -- and the one most easily forgotten, even by fans -- its political context. "We are occupied," Judas says. "Have you forgotten how put down we are?" In these lines, we're given the key to Judas' character and motivations, and set up to anticipate the political factors that will lead to Jesus' arrest and crucifixion. Rice and Lloyd Webber emphasize the fact that the Romans are in control of Israel, and if Jesus is the Messiah, the King of the Jews -- or if the Jews at least believe that's what he is -- then Jesus poses a threat to the Romans' continued dominion. The subsequent actions of the priests, Pontius Pilate, Herod, and Judas when he betrays Jesus are all framed by that political setting. And seen within that frame, the familiar question from Act Two -- "Jesus Christ Superstar/Do you think you're what they say you are?" -- has less to do with how Jesus answers it than how the rest of the world answers it.

""Do you think you're what they say you are?' -- That's been the big question for 2,000 years," notes Thompson, and therein lies more of the inspiration for AMT's Superstar. An awful lot of history in the last two millennia has turned on that question; because some people answered it with a fervent "yes' and others with an adamant "no,' humankind had to suffer through the Crusades, the Spanish Inquisition, and the Salem witch trials, to name just a few of the uglier episodes. Oh, to be fair, much good has been done in Jesus' name, too, but that only adds to the significance of this one figure's place in human history. Any look back across the last 2,000 years sees the legacy of Jesus turning up again and again -- in individual lives, in small communities, in the movements of states, in the affairs of nations. We wouldn't even be so keyed up about this impending change of the calendar if someone hadn't decided to mark the progress of the modern era from the date of Jesus' birth.

That sparked in AMT's Superstar company the idea of telling this story while also exposing the layers of history and art and attitude that have been attached to the figure of Jesus over the last 2,000 years. To this end, scenic designer Christopher McCollum has ringed the stage space with scaffolding and made the central playing area a large raked platform on which a large mosaic of tiles is painted. Together, the set pieces suggest an archeological dig, in which Christian images from the Middle Ages or before are being uncovered. Additional set pieces are flown in -- Mediterranean columns of the classical era here, a stage proscenium and velvet curtains of the modern era there -- to expand our sense of history echoing as the original tale is told.

The costumes reinforce the idea of the past. Designer Neal San Teguns has drawn from an assortment of different times and places -- the court of Louis XVI for King Herod, the Fascist uniforms of 1930s Europe for Pontius Pilate, the leather-and-safety-pin garb of the 1970s punk scene for Judas' chorus, plus modern Las Vegas show biz outfits and even first-century AD robes and sandals -- so that we are constantly sifting through our past as we find the Jesus of this story. But the designs also propel us back into the present, showing us both the story of 2,000 years ago and the impact this story has had on the world we live in and the world we will live in. This approach, says McCollum, gives "you the past and the present, and I think that's an exciting choice."

It may not sound like Peter Pan or Annie or anything we've seen before from Austin Musical Theatre. But that's it should be in the staging of a work that was unlike anything that preceded it: something new for something new. In all of AMT's productions to date, Thompson and Byron have shown that they build their shows from the inside, from a thorough understanding of the material at its core; they get the heart right and go from there. In producing Jesus Christ Superstar, these artists are tackling a show that pushed our understanding of the musical form and of what it had to say. They're pushing themselves to create a show in the spirit in which it was created. That does sound like AMT and a Superstar worth seeking out.