Three for the Barre

Coming at Ballet Austin's Recent Program From a Trio of Perspectives

Three ballets, each with its own particular style and angle on romance. Three spectators, each with her own particular style and take on ballet. As the Chronicle Arts team anticipated Ballet Austin's recent program of multiple dances, all very different -- a jazzy modern ballet by the master George Balanchine, a romantic and witty ballet with a French accent by local original Stephen Mills, and a balletic face-off with flamenco starring the blazing José Greco II -- we thought it might be intriguing to cover it with multiple reviewers, all very different. So it was that the Dancer (Dawn Davis), the Dance Scholar (Barbejoy Ponzio), and the Dance Spectator (Ada Calhoun) all attended the production with the idea of reviewing it. And since we were taking an unorthodox approach to reviewing the show, we thought the reviews themselves might as well be equally unorthodox. So, rather than publish individual reviews written separately, we had the three sit down after the final performance and share their opinions in conversation. Here is an edited version of that talk. -- Robert Faires

Dawn Davis: I think that they did an admirable job with Rubies. I saw a lot of things in this piece that are really indicative of Balanchine's work. The quickness, the use of the hips, the jazzy syncopation --

DD: Not things you usually see in ballet. I'm impressed every time I see a Balanchine piece by his use of the stage. Sometimes he'll only have five dancers on the stage, but they are so well-placed. And the pieces are so well-staged that even though there are all these things going on at the same time, it's not too distracting.

BP: Balanchine used to choreograph for Hollywood films, and I felt I was watching a classy Las Vegas revue -- with really good technique.

Ada Calhoun: It was just this giddy, romantic kind of thing. That's what I liked about it.

DD: Somewhat flirtatious. And it had a sense of humor. One of the things that I found most interesting in the piece was the four men manipulating the woman.

AC: They made her into this little puppet.

DD: Yeah. She was this pretzel. I was wondering what that part was about because it was so different from the other parts. It was different in feel, it was slower than anything else on stage. Suddenly there's this woman being manipulated.

AC: Well, I thought she was really sexy. It seemed like you've got this dynamic between this really strong but easily manipulated woman who is dancing with a lot of other people and this sort of cute, skippy couple with the woman who looked liked she was about to topple over in that cute silly way. What would you say the plot of the first one was, if it was going to have a story behind it?

DD: It looked more like a bunch of vignettes than anything that was supposed to have a throughline. The throughline was maybe the humor.

BP: I didn't really think about a theme or plot because I just love to watch the movement. I was mesmerized by the movement. Dana Lewis really grabbed the audience through her performance attitude; she had a smile on her face the whole time. And Tom Gold did a wonderful job; it was as if he was flying. And when he would come down to the floor, it looked like he didn't even touch. I thought it was a great opening piece. The costumes, the lighting -- they just grabbed you.

DD: I think the fact that Ballet Austin is doing Balanchine works is a good sign. It means that it has reached a certain caliber of performance level. This is new for Austin.

BP: Red Roses. When I met you in the ladies' room, you were crying.

AC: I was just weepy the entire time.

BP: Talking about romance. The music, the singing, the French, the romantic language.

DD: I liked the way it flowed, when one song went into the next song. A lot of care was taken with the structure of the piece -- which piece went where and what journey they wanted to take you on.

BP: I really enjoyed Stephen Mills' choreography. The humor in it.

DD: I think he really knows how to show the dancers to their best advantage. He chose the dancers really well for what pieces they were going to do and which parts they were going to play, what their strengths were. I loved the swirling exits. When the men were taking the women offstage, they were circling, circling, circling. They did it at least four or five times. I was amazed that nobody hit a curtain ever.

BP: The duet -- that's the one that brought tears to my eyes. The fluidity between the man and the woman was just smooth!

AC: Also that they set that very clear, romantic, beautiful couple off against this couple that was throwing each other to the ground. Putting those two onstage next to each other was especially effective. And it was just so vulgar and fabulous, climbing all over each other and jumping on each other.

DD: Did you see [Ballet Austin's] A Midsummer Night's Dream? One of the best parts of that was the first act, when the lovers are in the woods; it was all this physical comedy and throwing each other around and contact improvisation, and it was just hilarious. You had a taste of that in this Mills piece, too, and it was so, so funny. The gymnastics that that required was incredible.

BP: I commented to you at intermission that if more people saw this type of ballet, they'd be amazed and the audience would be filled more.

DD: Perhaps we wouldn't have such strict parameters of what ballet should be.

BP: I like to watch dancing that grabs me, that keeps me going, keeps me interested -- "What's going to happen next?" And the humor and the wit in Red Roses held me there.

AC: I liked that the ballet had this set-up for him, where it's this group of very elegant but not all that impressive dancers doing these little playful numbers and then he comes out in this swagger and just blows everybody away. He's doing his fabulous thing in his high heels and they're all just standing around kind of gawking. And they dance with him a little bit, but it's obviously just a showcase for him. And the things he did -- the lunging and strutting.

DD: He knows how to hold the stage. That was his stage.

BP: He walks on: "I am here. I am the king. I will entertain." He has such a majesty about him. He commands your attention.

DD: He even performed the bow. He didn't just bow; I saw him turn around and he did this -- [makes sweeping arm gesture] -- really slowly to all the dancers, then he turned around slowly to all the other dancers. That's a really gracious gesture.

DD: She keeps coming back to that.

BP: Yes! You're right, though.

AC: I mean, come on! He's in tights and heels, and here he is being this incredibly hot guy. And so macho, the most macho kind of dancing you can imagine.

DD: I was completely blown away when he did the spin, lunge, leap, lunge.

BP: I think that's his signature.

AC: Works for me.

BP: There was passion in his performance, but I felt that in this particular piece that he was holding back. Because I saw his performance at One World Theatre and I was incredulous. The heelwork -- unbelievable. And this didn't have the same pizazz.

BP: I wonder, is that because it was in the ballet genre? And what about the music, Bolero? I mean, the music was great, but did it hold him back from using the heelwork, the technique?

DD: That piece just goes on forever, exactly like it is. There's no real climax to that piece.

AC: Well, I thought the whole thing was the climax to the program. You had the first two dances that were leading up to it, and it ends with this big bang of sorts.

BP: Of the three pieces, which one sticks most in your mind?

AC: I thought the three of them were great together. I was really into it. I'd been to three plays in the last three days and they were all about sex, but they were all about sex in explicit ways. Then I see this and it's so subtle, and so full of commentary. Like the second dance: I thought it was like watching people kiss for half an hour. And like the prettiest people in the entire world kissing for half an hour.

AC: And that's ballet. When it's good, that's what it is. All these beautiful, strong, healthy young people doing all these fabulous things with each other. And each one of them was doing it in a different way. Like the first was this young, perky, kind of a 1950s couple, then you had this sexier woman alone with all these men throwing her around. And then the second piece was with these Edith Piaf songs sung by Christine Albert, who just did this unbelievable, wonderful thing with them, and you had all these different couples, some of them violent and incredibly passionate, and some of them just doing their sweet little romantic dances. And then the third one was this outright Latin passion climax. So I thought each one in its own way commented on romance and on sensuality and on love. And each one had its own take on what these things mean, and I liked all of them.

DD: So for you, the program needed all three pieces in order for it to work?

AC: Well, not to work, but I think it gave a more complete idea of what these things are about, what love is about. They were different facets, which maybe ties into the whole jewel aspect.

BP: I liked what you said about the different couples -- one was passionate and struggling, fighting with each other, and another was expressing love in another way. So actually, it was real life on stage: how we express our love in different ways, different intensities. What I loved about the entire performance was that I could watch ballet and be entertained without looking for things to keep me from being bored. I was just entertained the entire time and awed. 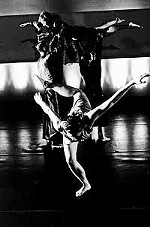