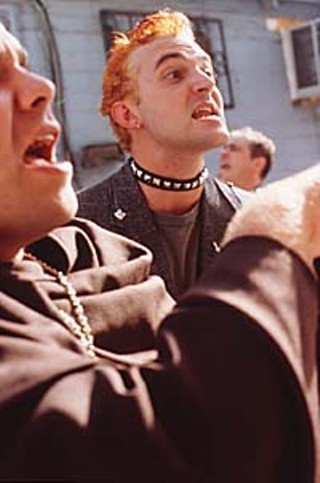 This is the voice of punk rock: a raw, searing blast of uncurbed emotion, rising from a dark, barren pit in the soul, the voice of the outsider, the misfit, the castoff, letting fly all his pent-up resentment in a loud, primal howl. This ragged, raging voice claws at your ear, but with an intensity that cannot be sustained for long. Like a fire that consumes all the oxygen around it and burns out, punk quickly uses up all the energy in its owner; it flares briefly and is gone.

When actor Jason Liebrecht recreates the audition that seminal punker Johnny Lydon gave for the Sex Pistols, he delivers this essence of punk in all its raw fury. It's a striking moment, one that crystallizes what is both hypnotic and repellent about this radical movement born in the Seventies: the frustration, the rage, the rebellion, the recklessness, the newness, the urgency, the utter disdain for the conventional.

Lipstick Traces, as adapted by the Rude Mechanicals from Greil Marcus' social history, lets us glimpse the origins -- or, more accurately, an origin -- of punk in the birth of the Sex Pistols, while also showing us punk's kinship to other radical movements in this century and earlier eras. Dramatized versions of Situationist thinker Guy Debord, Dadaists Richard Huelsenbeck, Tristan Tzara, and Hugo Ball, and a 14th-century heretic named, oddly enough, John of Leydon pop up on the bare stage alongside Johnny Lydon, aka Johnny Rotten, and Sex Pistols mastermind-propagandist Malcolm McLaren to offer up the peculiar doctrines, visions, and subversive acts that set them at odds with the rest of the world and yet may have influenced that world more than we're aware.

Sometimes these malcontent extremists -- somewhere between madmen and hucksters -- speak directly to us, challenging our conventionality in smart, stinging soliloquies, sometimes they show us the work that made them infamous: a fiery Huelsenbeck literally beats the drum for Dada while a cool Debord shows his conceptual film of a totally black screen. The personalities of these characters and their individual forms of expression vary wildly, and yet as the Rude Mechs dash across time and space, showing snatches of the various figures' histories and works, a sense of relationship does emerge -- and it doesn't spring solely from the contextual interjections of helpful narrator Dr. Narrator (Lana Lesley, reviving the character created for the Rude Mechs' curst & Shrewd). The script by Kirk Lynn and 10 contributing writers deftly weaves like threads of attitude and rebellion among these figures, so we can discern in their lives a common pattern of revolution.

Ultimately, Lipstick Traces gets us to hear the ragged, raging voice of punk in the nonsense phrases of turn-of-the-century Swiss artists and the "work-is-sin" rantings of a German monk of the 1500s. And it does it through a production that, remarkably enough, sings in that same voice. The scenes in this play are short, intense, irreverent, highly charged -- qualities belonging to any good punk song. Director Shawn Sides kicks the show off with a fierce sonic explosion and never lets up. Zach Murphy's crisp, searing lights and Gordon Gunn's booming sound seize our senses, while every cast member -- Ehren Christian, Michael T. Mergen, Gavin Mundy, Robert Pierson, Liebrecht, and Lesley -- grips us with a tightly focused, forceful performance, with Lesley's hilariously frazzled Dr. Narrator the glue that holds them and the show all together.

Too often, history feels like a distant thing, a time and way of life so removed from our own that we can't find the pulse; it's dead to us. Lipstick Traces is history, but it's history that's most definitely alive: sound and light, rage and chaos you can't help but feel.