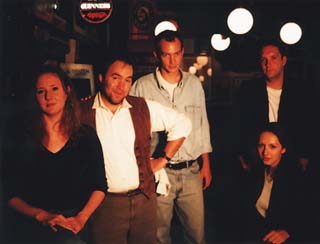 Set in an upstate New York bar on one stormy, fated evening, Slow Night at McLaughlin's is a kind of noir family drama, in which a beautiful stranger wanders into a small town, a much-maligned brother returns home, and liberal amounts of liquor lubricate everyone's tongues, leading them to speak some previously concealed truth. When it comes to the mystery hidden within the McLaughlins' past, this new play by Marshall Ryan Maresca is successful, but it is even more successful in terms of the humor and warmth that playwright and director Maresca and his talented ensemble cast bring to the play. Slow Night is really about the three McLaughlin boys -- Ed, Tom, and David -- and the wreckage that remains of their family's tumultuous history.

Slow Night is sweet and occasionally funny, making pleasant use of the Emerald Isle's tradition of story and song -- although true to its name, the play is also slow at times, sometimes frustratingly so. As the estranged brothers, Robert L. Berry, Eric Peterson, and Jesse Wiles bring charisma and a percolating Irish temper to their roles. As the surrogate mother to the boys, Shannon Grounds offers up her heart in a nuanced performance that is both memorable and moving. An underwritten character burdened with a dramatic, pivotal speech toward play's end, Grounds brings so much to the role that she seems the linchpin that keeps it hanging together. Walking back to my car, a few of the plot twists didn't sit with me, but then again, they also didn't make me roll my eyes while I was involved in the drama. The acting and the sincerity of the play make it as satisfying, as bittersweet, and as stout as a pint of the ol' Guinness.