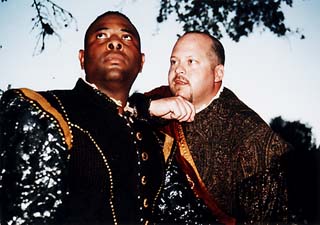 The Austin Shakespeare Festival's Othello is a gorgeous-looking production which begins and ends with powerful images. What goes on in between, however, ranges from detailed, sensitively crafted moments to wild, gestural histrionics and vocal incoherence, leaving the sense of an opportunity missed.

Director Bill Sheffield and a top-tier design team create a stunning environment for a powerful drama of epic proportions:Dwight Markus fashions a Stonehenge-like set with towering grey slabs that arc gracefully around the rear of the stage, providing a geometrical focal point at center stage for the tragedy's business; Robert Whyburn amplifies this stoic, cold formality with blue and grey lighting, often enhanced with geometric patterns; Michael Hite lands the action in its period with sumptuous costumes that create giant figures of the players by altering their natural silhouettes with angular, textured, weighty fabrics; Julian Reed's evocative harpsichord underscore, while a little repetitive by play's end, provides a pleasant, stately sound.

With all this severe stateliness in the designs, one might expect a similar formality and strength in the acting -- a play peopled by characters of noble bearing in which the chaos of Iago's vengeance cuts like a rapier. But for the most part, the actors cannot fashion that necessary aura of nobility. Many bear themselves rather less than regally, and several characters even come across as silly, given the highly structured, dangerous world they inhabit and the well-wrought designs that lend effect to such a world.

Clay Towery's maniacal laughter as the lights fade on the play's final moment reveals a key element in his character missing all evening long: an Iago who enjoys the soul-destroying madness and random havoc he wreaks in this formal, courtly world. Towery, rather, is jovial and cloyingly servile, without a desperately needed, dangerous connection to his audience. How slow and dimwitted are the others, his actions seems to say. Side with me, repugnant though I am! But the amiable actor, though certain in his words, does not carry his treachery beyond the footlights; he doesn't compel the hillside audience to hate him or to secretly admire the only character who forces the action of this play. With such ambiguity, the play loses its intensity and drive. Well-choreographed stage fights restore some sense of this missing sharpness and formality, but the acting, overall, serves to weaken a difficult-to-perform script.

Virdell Williams Jr. plays the Moor, Othello, ably at first, but his descent into jealousy and near-insanity causes the actor to lose his connection to Shakespeare's words. Often difficult to understand, Williams spouts tragic phrases in odd rhythms, albeit in his glorious baritone; but sometimes he just chews through speeches unintelligibly, gesturing with simplistic literalness (a symptom shared by most all of the cast), dulling the poetry. Jill Swanson plays Desdemona as an out-of-touch schoolgirl, eager and foolish and simple. Swanson's posture is highly suspect; her desperate speeches of fealty and loyalty when confronted by her murderous husband ring hollow after so much foolhardiness. Susan Poe Dickson retains the bearing of the austere Venetian court as Desdemona's waiting woman and Iago's wife Emilia, as do Brendan Kelly in his roles and Dan Brisbee as Cassio, once he gets past the opening scenes. Kym Preiss, as Cassio's mistress, Bianca, seems to have forgotten which play she is in: the dangers of running in repertory. Her Bianca bounds insolently out of the 1960s world of ASF's other play, As You Like It, further demoting the play's tragic tones to mere frivolity. But Priess' impropriety only indicates the larger problem of a cast that has not connected with the regal, tightly wound world so clearly defined by the playwright's words and creative team's artistic vision.