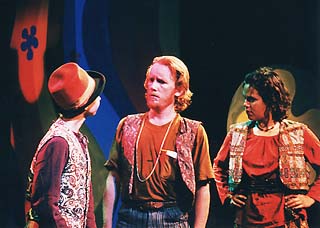 "It's the movie," says Bill Sheffield, board member of the Austin Shakespeare Festival (ASF) and director of the Festival's second play of the season, Othello, when asked why there seems to be so much Shakespeare on Austin stages these days. He's being a little facetious, but when the same question is asked of Paul Norton, artistic director of ASF, whose As You Like It is running in repertory with Othello, Norton grins and comes up with the same response: "It's the movie."

The movie is Shakespeare in Love, which turned the rather unhandsome, brooding book-jacket icon into a swashbuckling, charming, romantic hero right out of one of his works. And with that makeover, the author's plays have taken on a renewed energy, a playfulness, a sparkle: Cavorting is "in" this season, passion, too (of varieties pure and base). Academic productions hewing to "proper" stagings of the great works are out of favor, supplanted by experimentation, theatricality, and so much enthusiasm -- it's as if years have been shed from those familiar pages.

In the spring, Robert Faires (Chronicle Arts editor and sometime theatre director) staged a gorgeous six-actor Twelfth Night. At the same time, the UT Department of Theatre & Dance mounted The Winter's Tale, and Concordia University produced Romeo and Juliet. Following the summer's lull, when the action moved to Winedale for that annual rite of Shakespearean passage for UT students of English, Austin is again awash in Bard-dom. On stages across Central Texas, you will encounter every kind of Shakespearean experience: tragedy, romance, comedy. From a minimalist Romeo and Juliet to a deconstructed comedy goofing on all the plays, you can't help but bump into some Shakespeare onstage right now.

The State Theater Company is closing its 1999 season with a robust Taming of the Shrew, marked by its jollity, sexual antics, and theatrical wit. Steve Shearer, as Petruchio, leads an all-star ensemble through some whip-cracking good fun. ASF opened As You Like It last week and opens Othello this week. Also this week, the Zachary Scott Theatre Center opens Shakespeare's R & J, wherein four schoolboys strip the lovers' tale to its bare essentials. And up at the Sam Bass Theatre Association's Old Depot Theatre in Round Rock, The Complete Works of Wm Shkspr (Abridged) is back on the boards, challenging its own four-person cast to complete the entire canon in a single, short, evening. Even the Chronicle can't help itself when it comes to Shakespeare: This is the second article in six months that dotes on Stratford-Upon-Avon's most famous son (See "Billy Shakes, Superstar," Apr. 23). The Bard is hot.

So it's no wonder that the Shakespeare Festival is cashing in on the new popularity of its namesake -- if free outdoor theatre could ever be said to be cashing in -- by producing two plays in repertory for the first time in 18 seasons of free Shakespeare under the stars. September has become the traditional season for ASF since it underwent an artistic shift with the promotion of Paul Norton to artistic director a few years ago, and while we expect something on the outdoor boards as fall approaches, this year we are generously treated to two plays for the price of none. ASF has long planned to expand its operations, so in the coming years expect a third production, most likely in the spring. And with this expansion come plans to troll beyond Shakespearean waters, in order to introduce Austin audiences and artists to some equally well-wrought, if often overlooked, playwrights who were Shakespeare's contemporaries. Besides the onstage education that comes with the production of these 400-year-old, popular classics, ASF continues its ongoing outreach to classrooms across Central Texas. 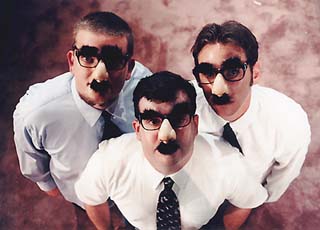 Nowhere is this mix of classroom and onstage outreach more apparent than with the ASF's As You Like It, in which a young company attacks the play with evident joy. Director Norton has set the play in the roaring 1960s, replete with psychedelia, good vibes, earnest, caring characters, and a soundtrack of the era's pop hits. The story's simplicity allows for this good-natured, cool angle. It's boy meets girl, bad uncle banishes girl, boy escapes into forest where he meets girl (now in disguise), girl works it so that she gets boy, as well as managing to machinate the amorous connections of all would-be lovers scampering about the forest; then everyone dances. Once we enter the magical forest (too much, magic bus!), the nastiness of the outside world vanishes; this is a play about having fun, so let's lose the bad guys quick.

The forest is Arden, a dreamy place full of delightfully off-center characters searching for their bliss (either of the philosophical or more earthly variety). Within are the trappings of the mid-1960s, not least of which is the cheery, youthful ensemble who appear to be enjoying the hell out of acting this play. Pamela Anson has clothed the cast in hippie duds, Dwight Markus has bedecked the stage with brightly colored shapes, painted, blobby flowers (Arden), or little Flash Gordon-like lightning bolts (the bad uncle's dukedom), Robert Whyburn goes to town with all manner of gobos and colored lights, and Stacey Harris' sound design is Top of the Pops, circa 1965-69 (no Beatles here, just a collection of ace contemporaries: the Kinks, Byrds, and Hendrix, to name only a few).

Norton gives his cast the green (or maybe the psychedelic strobe) light to dance, to pose, to get groovy, man; and it makes the production rather endearing, not to mention downright accessible to a Zilker Park hillside full of youthful theatregoers. If you have a teenager in the house and want to show him or her how hip Shakespeare can be, this is your chance. When not performing a scene, the company sits upstage, like the swooning, grinning audiences on the set of one of those pop music shows like Ready, Steady, Go!, observing the action downstage. Their enthusiasm ricochets into the audience, infusing all with that easygoing good humor as the story unwinds.

As Rosalind, the heroine of the tale, Stephanie Swenson (a busy actress, having performed in Different Stages' Ladies in Retirement and Salvage Vanguard's Dirigible already this year) is quietly charming, a demure young lady with a strength that stops short of willfulness. Disguised as a young man named Ganymede, she confronts the love-struck Orlando, who does not recognize his Rosalind, and she teaches him how to woo her. Swenson doesn't quite command the stage with the authority demanded of her character, but her careening between scolding her pupil and resisting the increasingly demanding urge to kiss him is increasingly sweet. Swenson leads a contingent of confident young actresses: Kym Preiss, as Rosalind's best friend and cousin Celia, who accompanies her into the forest of Arden and is obviously unused to the rigors of outdoor life; Ronit Schlam, as Touchstone, the court jester -- and quite the dancer; Evita Arce as the shrewish Phebe, spurning the attentions of young amore Silvius for the fictitious Ganymede; and Nitra Guttierez as Jaques (usually played by a man), personified with a sly smile and dry wit.

Of the men, Damien Gillen is a redoubtable Orlando -- his early-in-the-play wrestling match a neat comic bit, made more so by the soundtrack that underscores the galactic battle between diminutive Orlando and hulking Charles (played by Michael McKelvey, whose own cross-dressing, as Touchstone's intended, Audrey, is ripe for a few obvious laughs). When Gillen's Orlando sees Rosalind, you can feel his double take: Zing! There's the girl for me. Craig Clark plays the bad uncle, Duke Frederick, as a two-dimensional bad guy from a B-movie, but his good guy, Duke Senior (Rosalind's father, banished to the forest), is an amiable, gentle soul, sympathetically played.

It's not refined, it's heavily cut, it has the usual outdoor theatre sound glitches when wireless microphones pick up that over-earnest pat on the shoulder like a 10-ton pillow plopping down over the audience, but this As You Like It is likable to say the least, and so good-natured and honest (the kids are really kids, and the kids are alright), it's easy to sit back under the Texas sky and let the feel-good sounds and antics reel you in. 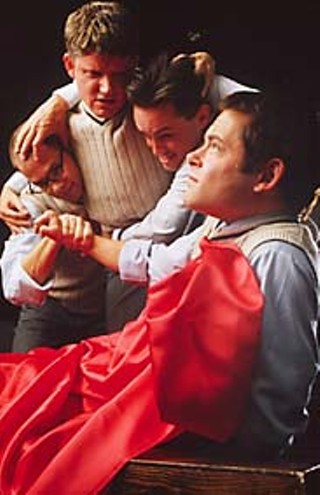 Are we spurning the deeper meaning, the problems inherent in some of these plays when we stage them with such unabashed focus on their uproarious good humor? The State's Shrew skirts the troubling issue of woman-as-man's-domesticated-beast with a wink and an awful lot of audience-pleasing pratfalls; the 1960s attitude of As You Like It creates a hip world, one that eschews commentary (Guttierez's Jaques, the ultimate Shakespearean cynic, is rather tame -- certainly not an outsider in this world where everyone ends up the best of chums) in favor of frolic.

Perhaps, as Paul Norton suggested in a conversation, we have moved past reverence and now possess the familiarity necessary to really begin to play with these plays. Norton himself quickly admitted that he, an Englishman having been raised on these works, sees Shakespeare as a good playwright, a pop artist who "never wrote a play that wasn't commissioned." Why not put the Kinks' soundtrack to a play that could have hailed as the springboard for the Summer of Love? And clearly, for an actor, what better words to put in your mouth and make your own?

Younger generations of artists and audiences, who see Shakespeare as more than the brilliant storyteller, the exquisite poet, but also as that swashbuckling, romantic pop star, rekindle the passion of all lovers of Shakespeare for some of the greatest works ever to hit the big time.

The Taming of the Shrew runs through Sep. 26 at the State Theater, 719 Congress.

As You Like It runs through Oct. 9 (in repertory with Othello) at the Sheffield Hillside Theatre in Zilker Park.

Othello runs Sep. 16-Oct. 10 (in repertory with As You Like It) at the Sheffield Hillside Theatre in Zilker Park.