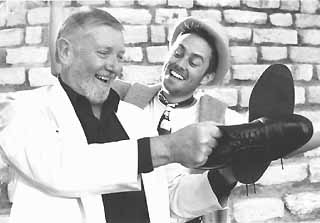 If you've never read a column or story or review by Chronicle Arts editor Robert Faires, then, for one thing, one wonders how you strayed into this section of the paper. But if you have read any of his writings, you may have noticed a few things about his style: Faires is a sharp wit with a soft tongue; his powers of observation and gift for nuance lead the reader past the obvious, into an almost dreamy realm where everything is possible, where the good inevitably outweighs the bad; above all, Faires is a gentleman -- a scholarly, quietly knowing, quietly confident man.

Now, if you wondered what kind of stage directorFaires might be, waste no time and pick up tickets for this last weekend of his elegant, understated (with a few hilarious exceptions) labor of love, William Shakespeare'sTwelfth Night. With a cast of six talented actors and a few minimalist bold strokes, Faires and company have crafted a bit of Shakespeare to fit neatly onto the near-empty stage at the Vortex and linger in the memory.

A curve of blue fabric, a bowl of water, a wooden toy ship, and a playfully melancholic song shipwreck the play's heroine, Viola, washing her ashore in Illyria. Believing she has lost her twin brother, Sebastian, Viola dons a man's habit and finds employment in the service of Duke Orsino, himself hopelessly pining for the unrequiting countess Olivia. In a bizarre shift of fortunes and identities, Olivia falls for the disguised Viola, while Viola falls for the unknowing Orsino. Almost magically, lovers are drawn to each other, and the story ends with each finding his or her true love, sister finding brother. Getting to this magical conclusion is an effort in thoughtful theatricality, as actors shift characters with the change of a hat; where umbrellas and a hat stand can transform the setting from palace to garden to coast to anywhere in one's imagination. The simple elegance of such changes creates a certain simple magic, enhanced by Jason Amato's cinematic lighting, which highlights faces but leaves the rest of body and stage in a colorful, enigmatic darkness.

The six actors do triple and quadruple duty, but each character is clearly -- and cleverly -- defined. Alan Waldock makes a stately Orsino, and his Sir Toby Belch is replete with swagger and a knack for getting the better of his unwitting drinking companion, Sir Andrew Aguecheek, effectively played -- hanky-stuffed mouth and all -- by Martin Burke. Burke, as Malvolio, Olivia's codfish-humored steward, also provides the production's comic height when he reads from a forged letter that proclaims Olivia's love for him and demands changes in the dour man's appearance and demeanor, consequently turning his comic melancholia into a farcical bad dream. Barbara Chisholm plays Olivia with the requisite cool of the unimpressed quarry, until she falls in love with the disguised Viola; then Chisholm sparkles with girlish charm. Michele Waldock plays Viola as quiet, saddened, but fresh-faced with hope for a happy ending. Catherine Glynn is quick and funny as the gentlewoman Maria, whose letter sets up the unwitting Malvolio, though her heroic Antonio, who rescues brother Sebastian from the shipwreck sees Glynn slipping into her more herky-jerky stage physicality and voice. Faires takes the role of Feste, the artful clown and this production's narrator, who guides the story with soft-spoken comic turns (hand outstretched for that extra tip) and an endless supply of bluesy songs -- some from Shakespeare, some from Gershwin & co. -- which serve as a gentle underscore to the slowly woven love story.

The soft, gentle energy of this production makes it a little slow at the start, but once all the players have been introduced, the play wistfully and cheerfully meanders toward its happy ending, delighting with its sharp wit, nuance, and quiet confidence, leading the audience past the obvious, into the realm of pleasant dreams. --Robi Polgar

SO CLOSE: DANCE FROM THE INSIDE

Cafe Dance, through May 16

"Almost. Nearly. So close. Detour. Change. Plan B. The silent stir that affects us all." So begins So Close, the Kathy Dunn Hamrick Dance Company's thoughtful and intimate physical meditation about the elusiveness of the present moment. Choreographers and dancers spend a lot of time talking about being "in the moment," but that concept is not always applied to the audience's experience of a dance piece. Hamrick attempts to address this by consciouslystaging So Close in the round, her choreography using both the stage space and the walkways behind and between the sections of chairs. As an audience member, I appreciated being included in the multi-dimensional experience. There was no hierarchy -- some danced, others watched.

Smooth transitions and walking patterns gave way to waves of contact movement initiated by a glance. Stop. Look back. Gesture and converse. Soft blue light and tranquil music. Pause. Rest. I watched Kate Warren's bound fluidity surge and spark as she alternately reached forward and shrank back, covering her head with her arms and gesturing in an unfamiliar but poignant sign language.

Waiting. Lines. Watching. A duet begins -- not overtly combative but definitely competitive. Kathy Dunn Hamrick and Marlo Harris engage in a friendly rivalry to a Piazzolla tango. Not sex, not camp, just two dancers aware of every moment, every fluid transition, every pull of the phrasing. I wished they would repeat it. Dissolve.

Surprise. Links. Spirals. Unison. Quirky walks and rhythmic dialogues melt, then quickly harden. It is as if someone is occasionally pressing a fast forward button to change the dancers' pacing, but their movements repeatedly return to a contemplative, steady pulse.

Go see this show. Read the program. Look around. Enjoy movement for its own sake and enjoy the moment. Experience the piece from the inside. It was both centering and energizing, two of the main ingredients in divine play. --Dawn Davis