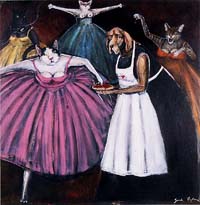 In part of her artist statement, when asked why she puts animals instead of humans in her paintings, Sarah Higdon responds: "Well, I was formerly an anthropomorphic rabbit and was abducted by aliens from outer space where my soul and mind were transferred into the human body of an edgy, blonde woman. My paintings," she goes on to say, "are the memories I have retained of my former life. Unfortunately, the past and the present are merging to form my own separate reality." Um, okay. I'll buy that. At least now the 40 or so paintings that make up "New Paintings by Sarah Higdon" at Wally Workman Gallery make a little bit more sense. That is, they make a little bit more nonsense.

With smoking kittens and loose poodles in halter tops, Higdon's irreverent canvases create a hilarious other world inhabited by farm animals that should not, at any time, be taken seriously. Go visit the Higdon's pets only if you're looking for a good time. There are buxom, sequined gown-clad chickens smoking cigarettes and drinking martinis in Old Mother Cluckers at the Cha Cha Club. A series of dog portraits includes a bust of Bruno, a cigar-smoking, red suspender-wearing hound dog, hanging next to Shorty, a depiction of a pugnacious-looking bulldog in his undershirt. One of my favorites is a small canvas depicting an enormous and buxom hog wearing a low-cut red dress and a pink boa over a bar table set with two full martinis. The title is the clincher: Please Let It Be Him is both laugh-out-loud funny and mildly disturbing after considering the pig one last time.

With this in mind, it would be unfair to label Higdon's painting as only funny, even though I can't shake the nagging sense that there isn't much substance to her style. Her parallel characterizations nonetheless hit the bull's-eye with amusing accuracy. Sheep are dimwitted old men and buttoned-up countrywomen. A heifer is a Madonna with Child. Chickens are clucking clergymen and lionesses are vicious, snarling prostitutes. Moreover, Higdon's use of space and magic realism brings to mind the Belgian surrealist painter Rene Magritte. The painting The Men I've Known is a good example. In it, a female cow floats above a lineup of bulls (and a stray goat) wearing Fruit of the Loom underwear while an array of tools -- hammers, drills, kitchen utensils -- floats with the naked cow. In another, Raven and the Mackerel Sky, the black bird wears a red cape in front of a blue sky dotted with Magritte's famous white clouds.

At times, Higdon's satire seems to target the Old Master Renaissance painters, as in works like The Adoration of the Virgin Mother, a classic rendering of a Madonna and Child set against a series of Greek arches in which the Madonna is a large white heifer holding her calf while chickens cum clergymen look on. However, more than anything Higdon is intent on portraying party animals on the streets or conservative country bunnies in long dresses. One thing is certain, if you're looking for a bunch of paintings of cats, dogs, and other cute pets, you'll be disappointed. If you want to see your pets getting loaded while looking for love in seedy bars, you'll be elated. -- Sam Martin

While waiting for the curtain to rise, I reprimanded myself for getting a "nosebleed" seat. No place to stretch my legs. No way could I turn on my penlight to see where to scribble notes on the program. The woman seated next to me already asked if I was going to flick that light on and off the whole time. How was I ever going to make it through the entire performance!!?? But ... my consciousness was immediately whisked away by the woman dancing onstage. She gradually edged closer to a man slowly being lowered head-first from above. Dangling enticingly just within her reach, he lured her up to him. Slithering up his body, she clung to him in mid-air. The two indulged in their metaphorical exploration of aerial dance, Temptation.

This awesome opening piece performed by Lisa Giobbi and Timothy Harling of the Lisa Giobbi Movement Theater was a precursor for the blockbuster array of diverse talent Charles Santos brought together for this year's Austin Festival of Dance. Created by Santos in 1992 as a way for local dance companies to unite in the fight against AIDS, the festival has developed a reputation as one of the most powerful national and international dance festivals/AIDS benefits today. The fest's theme for 1999, A Celebration of the Human Spirit, honored the strength of all the artists, volunteers, and donors who came together in a time of adversity to help combat the AIDS epidemic. To reinforce why we were really at the Paramount, the program incorporated affirmations such as "In the Austin area, AIDS cases reported among women showed a 45% increase between 1997 and 1998," and "During 1998, AIDS Services of Austin provided HIV-targeted prevention education to more than 38,190 people, promoting healthy behavior and harm reduction." Expressed through text and song before each performance piece by the powerful talent of the Zachary Scott Theatre Center, the festival celebrated the human spirit with all its joys, hopes, and fears.

The Lisa Giobbi Movement Theater, Tapestry Dance Company, Stephen Petronio Company, Sharir+Bustamante Danceworks, Dayton Contemporary Dance Company, Ballet Austin, Margie Gillis, Houston Ballet, and Gus Giordano Jazz Dance Chicago commemorated and memoralized their tribute by "dancing for life!" Each piece outdid the next. Each dance offered a different movement motif and echoed yet another quality of the human spirit. Margie Gillis skillfully and furiously conveyed passion for life by drawing wave-like formations through the air with her full-length dress, not at all encumbered by the sound system failing in the first minute of her performance. In Awassa Astrige/Ostrich, Dayton Contemporary Dance Company soloist G. D. Harris captivatingly commanded respect with his incredible regal and authentic portrayal of ostrich movements. The final piece Can't Take This Away, performed by Gus Giordano Jazz Dance Chicago, burst at the seams with life! Clad in bright pink and rose-colored draperies, unique pantaloons for the men and full-length dresses for the women, the dancers swirled tempestuously across the stage to a wonderful score of gospel music. They executed dynamic movements with inviting charisma and charm while still meeting numerous choreographical changes with speed, precision, passion, and joy. Their exhilarating pizzazz brought the audience to its feet with accolades of praise. An incredible finish to not only "dancing for life" but also "dancing for joy" when AIDS is stopped! -- Barbejoy A. Ponzio

Lecturer Aaron P. Treadwell, a geekish conspiracy theorist, believes he has the vital piece of evidence that reveals how the Hindenburg --that hydrogen-filled, German blimp that exploded over a New Jersey airfield in 1937 -- was sabotaged, not destroyed by a freak occurence of Nature. But Dirigible, staged by Salvage Vanguard Theater, is a play that only uses the lecture as one of several devices to tell the real story of Treadwell's stricken relationship with his wife, Laura. Juxtaposed against the lecture are scenes from a twisted Brady Bunch episode, a Sam Spade movie, a Dada-overlaid tableau of Georges Seurat's Sunday Afternoon on the Isle of La Grande Jatte (the painting made famous in the Broadway musical, Sunday in the Park With George), as well as snippets of apparently real dialogue between Treadwell and his wife.

For a new play, Dirigible is well-served by Salvage Vanguard's attention to theatrical detail. To vow that they "hate theatre" is a crock; SVT produces plays sometimes as professionally as any company in Austin. Kristin Abhalter's set effectively mocks the interior of a great airship; costume designer Regina del Pico assembles a simple but good-looking wardrobe, particularly for the Seurat tableau; and Ruth Huston's lighting design provides one of the most theatrical uses of the Hyde Park lobby door to date (why does it seem that everyone wants to stage an exit through that door?). Jason Neulander, SVT artistic director, has staged the play with a like-minded eye for detail, and the cast of three -- Michael Kranes as Treadwell, Stephanie Swenson as wife Laura, and Corey Gagne as The Saboteur -- all give solid, committed performances, skillfully combining broad physical comedy with some emotional depth.

Despite the cohesion of the production's various elements, the written material here falls short, which, in turn, renders the other efforts rather useless. Playwright Dan Dietz's script yanks us in and out of reality, with little logic of structure and an evident immaturity that guts the potentially tragic story of a man who has lost his love yet seems unaware of the depth of his loss. The effect of the evening is one of confusion and boredom, since we are locked into long sequences of absurd quasi-storytelling with such shallow devices as the Brady Bunch and the gabbled verbiage that accompanies the Seurat tableau. By themselves, these tangential sequences might stand as good cabaret sketches. But the playwright's hand is too obvious, forcing connections between the heart of the story and these pseudo-music hall turns.

About a year and a half ago, Physical Plant created a play, once., that invoked the same themes with a similar structure. A lecture on the platypus expanded to a love story of multiple layers and exquisite theatrical invention. Staged in a garage in an interactive setting that had performers above, below, and among the dazzled spectators, once. beautifully melded style, storytelling, and image to create the wistful, sad-yet-happy world of a lecturer and the love of his life. Salvage Vanguard tackles this same material like FOX-TV chases after unnerving disaster footage; there is little sense that, despite the solid production qualities, we are seeing anything new or remotely meaningful. The brief flashes of emotional depth are only that. In their place are seemingly random, manic style switches, an over-reliance on un-grounded gestures that might have meaning if only we were given some sense of context, and that often inevitable sense that the playwright just doesn't know how to pull the various strands of his storytelling together.

Dietz possesses a voice that, while still young, does resonate occasionally, but he has cluttered his story with so much pop effluvia that this voice is drowned. Should he layer his work with his more sensitive understanding of humanity and jettison the jarring elements of instant gratification and quick theatrical effect, he may find himself writing plays with the heartfelt echo of an endeavor like once. -- Robi Polgar