"Nothing happens, nobody comes, nobody goes, it's awful." 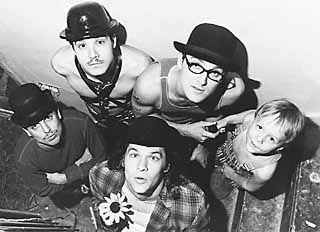 Fortunately, Beckett's bleak assessment of the human condition illustrated in the above quote is far removed from my own assessment of the Shirk Workers Onion production of his play, a surprisingly faithful and funny version of perhaps the most influential play of post-war theatre. Written in 1953, Waiting for Godot is the anti-story of Vladimir and Estragon, two thimble-brained fools who whittle away their time quibbling with each other, throwing nonsensical banter back and forth, and waiting for the mysterious man known as Godot (pronounced here "GOD-o," perhaps to emphasize the suspicion that Beckett's famous unseen character was, in fact, the Great Almighty). The two are classic comic opposites in every way -- Estragon the forgetful goofball to the fruitlessly pensive Vladimir -- but they are similar in their plight: both waiting for someone they don't know, for a reason they can't understand. In the first act, they are interrupted twice -- once by master Pozzo and Lucky, the whipped dog of a man Pozzo keeps on a leash, then by a young boy, a messenger for Godot who explains that his boss can't come today but is sure to come tomorrow. This pattern repeats itself in the second act, with the intrusion of a now-dying Lucky and Pozzo followed by the same message from the little boy. In the end, the two remain in their meaningless vigil, the pointless, habitual waiting that represents, for Beckett, the sad lot of every man.

Waiting for Godot is also about uncertainty -- the painful anxiety that builds only to be quashed by disappointment. And in illustrating this, director Anna Krejci is unafraid to let the moments of silence stretch out, so that they grow uncomfortably tense, almost unbearably so. Accordingly, the production is sometimes tedious, as you might expect in any play whose action is the absolute absence of action. But it is also very funny, a fact which Krejci and her actors milk for all its worth with their slapstick antics and generously broad comedy. Although billed as an Austin-centric production in which the main characters are Dragworms and Lucky and Pozzo S&M fetishists, this Waiting for Godot contains far more of the universal than the specific, even keeping the original references to geographic territories such as the Macon Country intact. This Vladimir and Estragon, with their ragged clothes and bowler hats, have a timeless tramp quality more reminiscent of Charlie Chaplin than Crazy John, especially in light of their boisterous physical humor. E. Jason Liebrecht's Pozzo seems, if anything, more the Italian mobster than the perverse sex fiend his tight leather garb might indicate. And there are certainly no recognizable Austin landmarks on the spare stage, which consists only of a lump in the ground and a tree (bearing more than a passing resemblance to a crucifix). However, the unlikely outdoor stage at Club DeVille does offer a fitting backdrop for the action, creating a natural imprisonment which offers the actors almost no escape -- steep white cliffs on one side, the audience on the other.

The most welcome aspect of the production, though, is the surprising performance of R. Guilford Adams as Estragon. Adams proves himself not only an impressively adroit physical comedian, who can take pratfalls like a champ, but an actor able to think on his feet, who can toss off an improvised aside as if doing so were effortless. In contrast, Todd Lowe's Vladimir appears more labored. A talented chameleon of an actor, Lowe seems less at ease in a role that calls for him to play the straight man. Rather than foiling Estragon's comedy, Lowe resorts to clomping around the stage and often yelling his lines, a tendency which overshadows his more memorable moments -- for instance, a lovely scene in which he breaks into song.

Nonetheless, all the actors involved seem to throw themselves into this show body and soul, and the result is a production worthy of more than a passing recommendation. Despite the fact that there are two versions of this play running currently in Austin (the other is by the UT student theatre group the Broccoli Project), it seems that in the last decade or so Beckett has fallen into the canon of playwrights more commonly read than seen. And after experiencing this show, I can tell you: That is a damn shame.

The Off Center Warehouse
Through April 24
Running Time: 2 hrs, 45 min 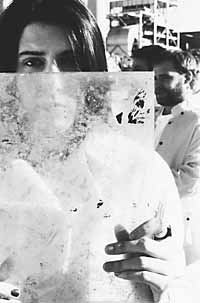 As their latest offering, the Rude Mechanicals have crafted an unlikely adaptation of Donald Barthelme's 1965 seminal piece of postmodern fiction. Unlikely because, although inspired and goofy, Barthelme's retelling of the infamous fairy tale is in the form of a disjointed, somewhat uncrackable novel which uses its source's recognizable archetypes -- wicked stepmother, whistling dwarves, naïve heroine -- to express the author's own intuitions about the unravelling world at large. It is so decidedly literary that bringing it to the stage seems a daunting task. And yet the novel is also very much in line with both the spirit of absurd theatre that the Rude Mechs truly love and the company's successful forays into scrambling classic texts (e.g., curst & Shrewd, the Rude Mechs' fractured version of The Taming of the Shrew ). Indeed, this brash pastiche of the childhood favorite contains all the commendable elements that have made past productions from this group such smashes: a knowing sense of the absurd, the whimsical, the vulgar, along with the collaborative efforts of some very funny, very twisted artists.

But call me crazy: Snow White didn't make much sense.

In this incarnation, Snow White is a "horsewife" tired of bowing to the needs of seven demanding dwarves -- or, in this case, seven grown men. In fact, in this kingdom, it seems most everyone is bored with the status quo. The leader of the dwarves, Bill, does the unprecedented by pulling away and questioning the old routine. Even the loathsome, vitriolic Hugo de Bergerac and sleazy Jane seem unsatisfied, waiting for something -- however vile -- to fill the void. Before too long, the once-satisfied Snow White is doing the unthinkable: furiously writing poetry. Meanwhile, she props up a female blow-up doll at the window, where she had previously stood, toothsome and unnoticed, her raven locks flowing from her balcony like Rapunzel's. So where's her Prince Charming, you may ask? Well, the bratty, indulgent Paul is running off to join a monastery. So much for happy endings.

At first glance, it may not seem all that puzzling. The difficulty comes in the show's tone, which shifts from one genre to another. Is it a burlesque? The debauchery in which these fairy tale heroes engage seems to indicate that it is. Is it a political and social statement? The parallel between Snow White's liberation and that of Sixties women seems a no-brainer.Is it a spoof of academics? Phrases are intermittently projected onto the wall, mocking the blathering academese of professors (they're the titles of chapters in the book), and long monologues ape the meandering tone of a thesis paper. Or is the show just meant to be pure fun, with its dancing apes and sexual innuendo?One thing is for sure: It is unconventional. But by not setting a clear agenda, the group left at least one audience member scrambling for a hook, and subsequently, rather too adrift in confusion to find much of its cleverness very funny at all.

The good news is that for those unconcerned with understanding their theatre, there is plenty in this production that's solid. Not the least of it is a group of high-energy performances, among them Shawn Sides' vampy stepmonster figure, Jane, and Ehren Conner Christian's doting male servant to the not-so-princely Paul. Another plus is an imaginative use of this Eastside warehouse,sectioned off cleanly and pleasantly to give each character or collection of characters his own domain. Lana Lesley, who adapted the novel and directed the production, also gives us some genuinely fun and well-crafted moments of theatre, such as Jane's choreographed dance number with an ape and the trick of the very last scene.

Still, it's too little too late. The play sends us on a wild ride -- at time nonsensical, at times bleak, at times vulgar -- and at the end, it is quite difficult to say exactly why we took that bumpy journey, or even what we saw along the way. It is an experience my companion at the show likened to hearing a teacher read Shakespeare for the first time: It may be filled with gems, but they were all lost on me. -- Sarah Hepola