The Cyclical Night: Puzzles in Moonlight 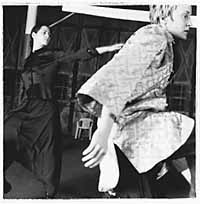 From all appearances, The Cyclical Night is a work of obsession for choreographer José Luis Bustamante, who created this shadowy fantasiafrom ruminations about Jorge Luis Borges' poem of the same name. The poem provides its own ruminations on how everything in nature and in man revolves in a cycle -- or, more mundanely, how everything old is new again. And though hauntingly beautiful, this latest sitework from Sharir + Bustamante Danceworks is just as puzzling in its philosophy and meaning as the famously cryptic Argentinean poet himself. For most of the performance, eight dancers move about onstage -- in line with the spherical theme, their arms pinwheel, they turn and turn, the dance a swirl of colors, fabric, bodies. Paired in couples that change continually throughout the dance, the performers interact in various ways: sometimes seductively, moving closely as if to suggest some unspoken connection; sometimes mysteriously, moving in and out of the tight spotlights and into the dark; sometimes with hostility, using their bodies to stop another dancer's movement. There is a mathematic precision to the choreography and -- if the copious notes included with the program are any indication -- to every aspect of the performance itself, from the lighting to the music.

Throughout The Cyclical Night, Bustamante displays a poet's fascination with beauty, in the colors chosen, in the sounds, the images projected on a wide screen, even in the design of the renovated Brink Warehouse, whose spacious cement floors add an elegant spareness to the evening. Ever the poet's muse, the moon is given homage, as it is itself the cause of more than one cycle, most notably the ebb and flow of the tides. Not only can we see moonlight in the tight round spheres of light that populate the stage, but we can also hear its flow in a rendition of Beethoven's "Moonlight Sonata," which plays twice during the piece. It produces the same kind of hypnotic quality that might be found in students poring over Borges' verbal labyrinths and puzzles.

Twice, the dancers disappeared in the wings and Bustamante himself took center stage, in front of a large video screen, so that his shadow was cast on it. I found these sequences unintentionally humorous, not due to Bustamante's dancing, which had a curious staccato, but because the images projected on the screen --in one, a woman's moving head which looked for all the world like the bride of Frankenstein and in the other, a series of chattering teeth --seemed out of sync with the lyricism of the rest of the piece, as did the voiceover narration that featured a deep, round voice intoning, among other things, "I am a character in an absurd drama."

In the end, the most successful of the The Cyclical Night's symbols was its last, in which dancers placed withered branches into the white spotlight, and Bustamante, moving toward the front of the space, presented the audience with a lush, green branch in his hands. It was an immediate and tangible symbol that captured the theme of death and renewal in a striking visual image. It was a satisfying end to a show which, though alluring in its beauty, was simply too elusive to do more than tantalize. --Sarah Hepola

RHYTHM TREE: A GIFT OF SELF

"Rhythm is something we share in common, you and I ... the rhythm of the heart is the first and most important rhythm in human life."

Wouldn't life be simpler if rhythm were the universal language? If, despite our differences, the expression of rhythm through the dance would reveal the commonality in all of us? Dancing would be our spiritual connection with one another and the universe.

The 400 young people performing in this latest Believe in Me production gave their audience a glimpse of their spiritual connection; Rhythm Tree, a dance performance, was a gift of themselves -- their artistry, commitment, and self-expression. The opening piece, performed by the entire cast, began the tale of the Rhythm Tree with a mythical phrase "Mother Earth Asked Father Sky to Dance." The two children dance so hard that they shake the earth and make all things move. The movement becomes dance. When they stop dancing, the world falls over. Mother Earth and Father Sky succeed in capturing the attention of the world. They ask all the people to meet them at their family tree, the "Rhythm Tree," to share the stories of their countries so they can become one unified world. The people agree and come one by one to tell their stories.

Rhythmic clapping, the heartbeat of the dance, wove the people's tales into a tapestry of movement. The clapping executed throughout the 16 dances punctuated the joyful flair of cultural movement diversity. Australia's aborigine people arrived at the Tree first to perform the clever "Dream Time," a walkabout in search of personal strength. Spain robustly followed with catchy flamenco palmas. In response to the richness of sharing, the Rhythm Tree began to grow. After the Balkan lands articulated zestful kicks, China's colorful dancing dragon slithered across the stage to greet Ghana's people, whose impressive luminous robes rippled from upper body contractions. And the Tree continued to grow. America's gangbuster tribute to its homegrown dance form of jazz and tap prompted a thunderous roar of applause from the audience. Ireland's challenging step dancing gave way to Bali's light-footed gestural dance. India's exquisite costumes for the diye and puja dancers lighted a welcome for Israel's movement interpretation of life in arid places. Norway's humorous unspoken dialogue was embellished by Mexico's flirtatious fiesta dance. The Dragonfly and Corn Maiden ritual dance of the Native American Zuni offered a wonderful contrast to Brazil's joyous Carnaval celebration, accompanied by drummer and accordion player, which completed the movement mosaic with panache. The Rhythm Tree soared above all and burst with each culture's spirited expression of self.

"Together the people celebrate its great brilliance and beauty." And that they did with untapped energy, enthusiasm, joy, and love for dance -- all 400 of them. Everyone sitting in the audience -- parents, friends, and relatives -- reveled with them. "They set the world in motion!"

But, it was also Believe in Me's artistic director/choreographer, Tamara Barrington; choreographers Laura Agnew, Adrienne Ehrlich-Miller, Dee McCandless; music director Billy Wolfe; and costume designer Pamela Wolf Fletcher that "set the kids in motion." The talent it requires not only to orchestrate such a large production, but also to motivate 10-15 year olds to perform so well and with so much energy is truly amazing!! Behind every performer is the artist passing on her gift of self. Thank you for sharing your gifts. Thank you for making the dance an uplifting, inspiring, artistic celebration of communication and spirit.--Barbejoy A. Ponzio