BLUES FOR AN ALABAMA SKY: ON EDGE AND EAGER FOR MORE 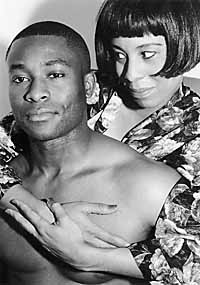 Good acting, good script, and a cozy venue -- makes for a perfect theatre production, doesn't it? It does at the Santa Cruz Center for Culture when ProArts Collective of Austin, an organization promoting African-American arts, presents a production on the Eastside for the first time.

Even with opening night jitters and minor fumbles, this local premiere of Pearl Cleage's powerfully written Blues for an Alabama Sky succeeds. With characters that are real and honest and a thought-provoking message stirred into a mixture of truth and humor, this romantic comedy-drama touches on social and racial issues that are as relevant today as they were in Depression-era Harlem, when the play is set.

It's Harlem where the characters end up in pursuit of their dreams, only to have them clash with reality and be altered by fate. Austinite Cara Briggs -- a professional actress for more than 25 years -- plays the female lead, Angel, to the hilt, making her someone with whom we sympathize in the beginning and whom we completely loathe in the end. It is fascinating to watch how her selfish actions affect those around her and lead to tragic results. Maurice Moore as Guy, Angel's gay companion, plays off her intensity, giving the production many of its hilarious moments, to which the audience responds with howls of laughter. Still, the seriousness of the difficult issues that the play raises -- how hard it is being black in America -- were not lost on the audience.

Even though Blues for an Alabama Sky is over two hours, every scene is well-crafted, well-acted, and well-lighted. Boyd Vance excels in directing his cast, and together they keep the audience on edge waiting for the next dramatic moment. Vance cleverly gets the maximum use of the small venue by having actors make some entrances from the back of the space and staging some scenes in the center aisle. These touches also make for a more intimate experience between audience and actors.

If this show is an indication of what we can expect from Vance and ProArts, I eagerly await their next production. In the meantime, check out these Blues. --Mary Jane Garza 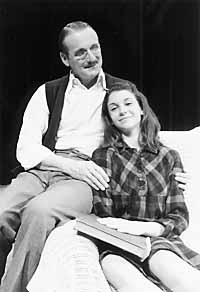 It is such a pity that a performance of The Diary of Anne Frank should resonate with the need to be performed. One wonders if the Holocaust taught any lasting lessons -- not that the systematic extermination of European Jewry was the first genocidal madness of the century. Clearly, it has not been the last.

As sorrowful as our need is to revisit the Holocaust, as sad as it is to recall the desperate sequence of events through the diary entries of a young girl -- a gifted, sensitive girl only just discovering her identity as a human, as a woman -- to stage such a story demands more than Austin Theatre for Youth can supply in its lavish yet insufficient treatment of Anne Frank's tragedy.

To be sure, most of the individual elements appear to be in place. With a few reservations about the technical maturity of actress Lucy Faris Carapetyan, her portrayal of Anne is full and moving, and possessed with an assuredness that never wavers. Ms. Carapetyan is a student at McCallum Fine Arts Academy, and her peers from the Academy -- Claire Nokes as Miep, Rob Byers as Peter Van Daan, and Lina Braun-Totty as Margot Frank -- all give heartfelt performances, and any lapse in technical proficiency can be attributed to age and experience: These are actors with a promising future. The adults in the cast give individual performances with varying degrees of success, and yet the cast lacks the cohesion of a tight ensemble. The production's sum is nowhere near as great as its constituent parts.

This sense of strong elements and an insufficient whole encompasses every part of the production. The cluttered, multi-leveled, multi-layered set design by Molly Reynolds is gorgeous. It creates the requisite obstacles of the Franks' attic hideaway, although the height of the stage space, with its hanging colored glass windows, gives a false impression of openness. But the sheer volume of contents impedes smooth movement and thus impedes clear storytelling. Reynolds has much more success with the costume design. Shannon M. M. January, a gifted lighting designer, has equally impressive layers of atmospheric lighting -- ambient light, dappled morning light, soft, warm light -- to add texture to the stage picture. Yet again, it seems almost over-indulgent, a weighty imposition to storytelling clarity. Over-produced and cluttered, the play becomes episodic, staccato -- a series of blocking shifts and light changes.

Rod Caspers' direction is a nuanced, detail-oriented effort, highlighting the claustrophobic life of eight people forced to dwell in a three-room attic and nearly focus-less as it strives for realism. One sees a perpetual motion machine that undermines most of the play's few intimate moments. Yes, the attic shared by the families Frank, Van Daan, and Mr. Dussel is crowded beyond most human endurance, but in getting to a realistic effect of excruciating public intimacy, Caspers loses the story. The play devolves into an actor's exercise of stage business. One scene stands out -- perhaps the only scene that is still and uncluttered -- that between Anne and Peter as they fumble toward a mutual understanding of their nascent sexual identities. The heart-wrenching conclusion has more to do with knowing the fate of the protagonist than with any strength in writing.

And it is the writing -- a dramatization of that phenomenal diary by Frances Goodrich and Albert Hackett -- that is the root cause of the production's insufficiency. One begins to dread what follows when "Produced by special arrangement with Dramatists Play Service, New York" appears on a playbill's title page. The script cries out for naturalistic interpretation, yet offers stilted characters and archaic language that mitigate the impact of the story. This script is less The Diary of Anne Frank and more a mawkish rip-off of some selected experiences, no matter the extraordinary efforts of Austin Theatre for Youth's quite talented creative team, and no matter the absolutely crushing reality that Anne's devastating world is our own.