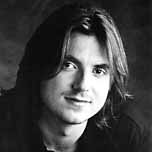 As an art form, stand-up comedy gets no respect. A lot of great headliners come through the Capitol City Comedy Club, but as far as the general population of Austin is concerned, they don't deserve that much attention. Even our city's hardcore comedy aficionados probably can't remember the names of half the comics they see. So if you were to take a survey of local folks and ask if they knew who Mitch Hedberg was, I'd be willing to bet that only a handful could answer that question correctly. That's a damned shame, because if there was ever a comic whose material, delivery, and overall world view fit in with the unique sensibilities of Austin, it's Mitch Hedberg.

Hedberg laughs at the ephemeral quality of comedic fame. He recently filmed a special for Comedy Central at The Palace in Hollywood. As the band broke into its opening number, Hedberg strolled onstage, took a surprised look at the elaborate set, and turned to the packed house as if seeing them for the first time. "Welcome to my half-hour special," he said, grinning. "Does anybody know who I am?" A few embarrassed giggles. "Why did a bunch of people who don't know who I am show up at my special?"

Not that Hedberg is unknown. In the bizarre micro-universe of stand-up comedy, he could easily be called the "next big thing." Seinfeld is over, Leno's not funny, and Bill Hicks is dead; the comedy world awaits its next savior to rise from the ashes and make a big bright mark in the sky. Hedberg has numerous television credits, made a huge splash at last year's Just for Laughs Comedy Festival in Montreal, has become one of Letterman's favorite comics, and recently had his first film, Los Enchiladas, premiere at the Sundance Film Festival. At the age of 30, he's poised almost to become a spokesman for a generation, though that is a title he would be reluctant to accept.

Hedberg's laid-back delivery, long hair, and sleepy eyes evoke the slacker/stoner label. His material, however, is intelligent, provocative, and very well-written. He's like the genius kid in high school that smoked dope constantly and still got a 1500 on his SATs. "I think Pringle's started out to make tennis balls," one bit begins. "But on the day the rubber was supposed to arrive, a truck full of potatoes showed up. But Pringle's is a very laid-back company. They said, 'Fuck it! Cut 'em up!'"

When I finally catch up with Mitch after a marathon game of phone tag, we talk about the whole "slacker" label.

"It's not my favorite thing," he says, sounding stoned. He was, after all, vacationing in Hawaii. "I mean, if someone asked me to describe myself, I'd never use that term. I guess it's cool enough..."

"Yeah, it's very old. They haven't come up with a new term for that yet. You could go with a classic term, like 'mellow' or something like that. It just seems like I can't get away from it."

After starting his comedy career in Florida, the land of the stock-joke hack, Hedberg decided that he needed to go on a pilgrimage to find "his people." That led him to the opposite corner of the country: Seattle, a city that could be called a spiritual sister to Austin. The natives welcomed him with open arms, and soon he was making enough money from comedy to quit his day job cooking in a Mexican restaurant. Things were still rough, though. Hedberg put a lot of miles on his car touring the notoriously rugged Northwest Passage of comedy, strings of one-nighters in backwoods bars playing to lumberjacks, ranch hands, and surly bikers.

"It was a such a struggle back then," Hedberg recalls. "Money-wise and getting people to laugh,it was a struggle. I have nothing but a positive view of it now. I mean, that's what was letting me not work a day job. Some comics don't want to leave a big town or work the shitty rooms, but they have to work day jobs. I had to quit my day job."

It took a bold move for Hedberg to break in at the next level. In the comedy grapevine, rumors were circulating about a new show on MTV, Comicaze, that was looking for new, unknown talent with a sort of edgy, alternative world view. Confident that he fit the bill to a T, Hedberg just packed up his car and drove down to the MTV studios in southern California.

"The first thing I did when I got there was go to the YMCA," Hedberg says. "I had a bad cold and I wanted to use the steambath. After I got cleaned up, I marched right into the studio. The people in the office were so nice. They don't get mad at you even if you just bust in on them."

Hedberg met the executive in charge of talent for the show, who agreed to give him a showcase at a comedy club in Hollywood. On the strength of that set, Hedberg had his first TV gig. The show didn't last long, but Hedberg had made his mark. He was noticed by Dave Becky, one of the most influential managers in the comedy business. Becky thought Hedberg was "still a bit green," but he began to keep an eye on the comic and helped him land other spots on TV.

Reflecting on that time, Hedberg says that his laid-back personality was the key to his success. "The thing that helped me at the time was that I was able to deal with the rejection. I didn't let it get to me. I was able to just go on to the next thing. But I had to take a lot of it." Even over the telephone, Hedberg is a master of deadpan understatement. "I sent a lot of tapes out to shows back then," he says. "A lot of them came back."

Hedberg's foray into filmmaking has been a similar learning experience. Based on life behind the scenes in a Mexican restaurant, Hedberg's Los Enchiladas is like his standup act: intelligent, witty, and drier than a 007 martini. Hedberg cast several of his favorite comics in prominent roles -- Marc Maron, Dave Attell, Todd Barry, Chard Hogan, and former Velveeta Room funny boy Brian Malow, who also co-produced the film -- and felt they "totally nailed their parts." At Sundance, however, Hedberg learned quickly that not everyone agreed. The film's first screening was Friday night at midnight. A rowdy crowd showed up expecting some outrageous, Animal House-style slapstick farce. And they didn't get what they wanted.

"It didn't get many laughs," Hedberg says, reflecting. Then he cuts to the chase. "It bombed. It was devastating to watch. I mean, it's cool, it didn't kill me, but it was definitely a disappointment. I was hiding under my jacket. Unlike stand-up, if something's going down in a movie, you can't change it. It is how it is. They wanted me to do a Q&A after the first screening, and I had to ditch it."

Once again, Hedberg's Zen-like approach and carefree sense of humor carried him through a horrible experience. "The second screenings weremuch better," he says, a note of relief in his voice. "I know the film will find an audience eventually. It's kind of dry humor, not rowdy or raunchy or anything, and that's what the midnight crowd was expecting. They were hyped before it started, but it just never kicked in."

"I didn't create any bidding war on my movie out there," Hedberg concludes. "I was happy to be there, though."

Hearing Hedberg relate the Sundance story reminds me of one of my favorite lines from his act: "You can't please all the people all the time. Last night, all those people were at my show."

The film is next scheduled to play at HBO's Aspen Comedy Festival, where Hedberg's reputation precedes him and audiences should be a little more tuned in to what they'll be viewing. "If worst comes to worst," Hedberg says, "I'm going to take the movie on the road and do stand-up before it, then show the movie."

While Hedberg says he enjoys making movies, he is first and foremost a comic, and that's what he intends to remain. His biggest break came at the Just for Laughs Comedy Festival last summer. Montreal is the place where "next big things" are made; the new faces seen onstage there usually pop up on television soon after. "I was really fortunate," says Hedberg, which is how he usually prefaces any statement about his success. "I had really good sets and people were talking about me." From his Montreal performance, Hedberg received invitations to appear on Dr. Katz, That 70s Show, and Letterman's show, where Dave actually quoted one of Hedberg's lines from his set; won a glowing review from no less than Time Magazine; and snagged a lucrative development deal with Fox that puts Hedberg in the chips financially. "Hell of a good six months," Hedberg says with typical understatement. Then he repeats his mantra, "I was fortunate."

Hedberg plans to use some of the dough from his development deal to finance another movie this year, but he hopes all the television and movie work will give him the kind of exposure and following he needs to continue pursuing his passion: good, old-fashioned stand-up, just man and microphone. His goal is to perform in theatres the way Kinison and Leno and some of the other comedy gods used to do back in the glory days of comedy. Hedberg believes those days are coming back.

After a long drought of good comedy, "people seem to be putting their brains to use again," Hedberg says. "I'm a big fan of well-written comedy. Personality without substance depresses me, but I think things are looking pretty good these days."

At the end of our conversation, I thank Hedberg for his time. "Hey, my pleasure, dude," he answers. "If you need anything else, I'll be here all week." 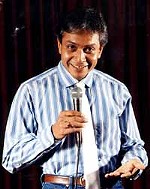