MY VISITS WITH MGM (MY GRANDMOTHER MARTA): SURVIVING IN AMERICA 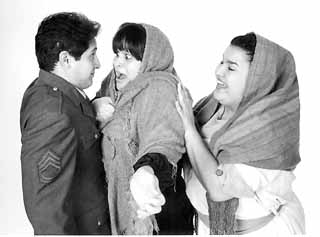 In Edit Villarreal's My Visits with MGM (My Grandmother Marta), a modern granddaughter, grown up and no longer living in Texas, returns to the burned-out shell of the home of her grandmother, rekindling memories of her youth, her family, and the difficulties of growing up American-born but possessed of a Mexican heart. In this Different Stages production, Marta Feliz, the granddaughter, pieces together the story of her grandmother, Marta Grande -- her escape from Mexico with her youngest sister, Florinda; her passion for, and eventual marriage to Juan; her assimilations (and rejections) of the various facets of the Texas border town culture in which she has landed. Yes, she and her sister have survived Mexico, but can they survive America?

Villarreal's play is heartwarming, passionate, and frequently hilarious, with this production of it thoughtfully and creatively guided by director Mary Alice Carnes. It is a mix of live action, reminiscences, odd and funny scenes and scenelets, and the continuous hovering of the dead -- benign interventions to ensure some kind of familial solidarity. But the play clearly comes in two unequal halves, and Act Two just cannot compete with the glorious excesses of Act One, once Marta Grande herself has become a ghost.

Karen Aroian plays Marta Feliz, the Texan, or Mexican, or Mexican-American: She spends the play in an ongoing struggle to discover her identity -- going through three husbands and the amorous attentions of the local priest in this disjointed search. Indeed, the play is Marta Feliz's memory play: She recounts the past, activates scenes from her youth, and interacts with the ghost of her grandmother once Marta Grande is gone. A bright and quick-smiling narrator, Aroian is a good actress but not quite capable of carrying the play through its less interesting second half.

Lydia Blanco excels in the title role, capturing the wealth of opposites and contradictions that make up Marta Grande. Her Marta is humorous and compassionate, full of the wisdom of the ages and more than a few bizarre and quixotic notions of her own. Marta Grande's most important trait -- her perserverance in the face of life's often cruel sense of humor -- is captured wonderfully and warmly by Blanco, from her opening poem explaining her flight from Mexicothat she recites in Spanish ("Yo salí," "I got out"), to her ire at having to die in the local health clinic. She is a true survivor, a lover of life, and her enthusiasm is infectious.

As Florinda, Yvonne Flores is often hilarious as the arch-Christian, holy-rolling Catholic antidote to her oddball older sibling, Marta Grande. Marta Grande fled to Texas with young Florinda,and her sister seems to never have forgiven her, antagonizing all in the house with her increasingly hard-line devotions. When Marta Grande dies, the house that she willed to granddaughter Marta Feliz becomes the object of a difficult tug-of-war between Marta Feliz, who wants to raise her family there, and Florinda, who wants to turn the house into a homeless shelter.

As Marta Grande's husband, the eager-to-please Juan, Marco Noyola, also finds a compelling blend of humor and wistfulness. Juan was gassed in the First World War, and as he ages, the effects wear on him. Villarreal's technique of intercutting the past with the present means we often get to see Juan as a young man juxtaposed with his elder self: Noyola captures the qualities of age and youth well. As Father Ernesto, pining for Marta Feliz, Noyola is funny, but here again, Villarreal's play demands too much of a character that cannot support so much of the second act's rather monotonous narrative.

The play concludes, though, with as much warmth as it began, and audiences should take the opportunity to see these new faces shining in such a lovely play. -- Robi Polgar

The gentleman genially holding the stage is clearly not of Our Age. His single-breasted brown suit jacket, with both buttons buttoned, his spit-shined brown wing tips, and clipped, all-but-hairless pate speak more of propriety and decorum than fashion. He welcomes the audience by affably shaking hands with several of its members, moving and speaking with a courtly cordiality that recalls an era of ice cream socials and calls paid on one's neighbors. And when this man excuses himself to take a telephone call or entertain another visitor to his office, it is with that practiced graciousness that bespeaks a time when manners were a way of life. As I say, not of Our Age.

By the time this fellow begins to tell us his story -- the saga of a 45-year career in the U.S. House of Representatives, with more than a third of it spent as its Speaker -- it's no strain to conclude that the tale takes place well before this decade, before the partisan face-offs, demonizing rhetoric, and budget talk breakdowns that characterize the Congress of the present day. Sure enough, we learn that he was first elected to the United States House in 1913 and served throughout that decade and the next four. He addresses us on a February afternoon in 1961, during his 24th term in the House and 10th term as Speaker, and as he spins yarns of that storied career, with the occasional interruption in which he conducts business of the House, we can't shake that sense of distance between the America of this man, Sam Rayburn, and the America in which we live. He talks of a country in which national unity and sacrifice play a prominent role in American life, in which political office is treated with honor and respect. It seems so far away from our cynical, critical, contentious era as to be almost invisible.

Of course, it's true that ours is not the first period of American history to suffer from bitter partisan politics or corruption among government officials, and the play addressed that fact. Playwright Clay Nichols has Rayburn remind us, "This country's always going to ruin." The reports of political discord and dismay over the nation's sad -- make that desperate -- state of affairs in the newspapers of Rayburn's day are very much like those carried in the papers of a half-century before that and a half-century before that. We have always had prophets of doom among us and no doubt we always will -- and with them the grafters and dissemblers and outright crooks who inspire their jeremiads.

Still, the Congressman who bends our ear for 90 minutes in this engaging solo show is like almost no one you'll see on our current political scene. He is a man who set his sights on the Speaker's chair the day he set foot in the House chamber but was willing to wait until it was "his time" -- a period, it turned out, of 27 years. He is a man who speaks of the necessity of fairness in the character of the Speaker. He is a man who speaks with shock of the critics of Lyndon Johnson so consumed with hatred that they spit on Lady Bird. He is a man who is willing to twist arms to get his way but unwilling to break them, and if a political fight should not go his way, he's willing to accept the consequences, however serious they may be. And, at least as portrayed by David R. Jarrott, he is a man who is attractively soft-spoken, his voice as mild and even as an East Texas breeze; even when expressing anger or sternly putting the screws to a politico he needs in his corner, it's devoid of spleen.

In fact, Jarrott and Nichols, with the guiding hand of director Robi Polgar, fashion a portrait of Rayburn as sweet and folksy as a field of bluebonnets. Nichols liberally seeds the script with country aphorisms -- such as "The steam that blows the whistle never turned the wheel" and "If truth was a bull, they couldn't hit it in the butt with a bass fiddle" -- and Jarrott harvests them with the wise air of a domino player at the VFW Hall. And when Nichols has Mr. Sam speak of the House as the love of his life, Jarrott lifts his heavy eyelids enough for us to catch the gleam of romance in them, even as he shows us in his knitted brow the weight that that love has set on him. In a way, this man is like the grandfather we see as children: bigger than us, caring for us, possessed of knowledge and depth of character we cannot fathom.

As such, the politician we see in The Speaker Speaks is almost too good to be true. But as soon as I give form to that thought , I sense that it's only my cynicism talking, my inner child of Watergate that doesn't want to accept politicians without ulterior motives or feet of clay. Why may we not consider this Sam Rayburn as presented? Whether he is or isn't accurate in each historic detail, this Mr. Sam resurrects for us an ideal of service that used to mean so much to Americans, gives us back a lost sense of political purpose, of community and hope, that may appear old-fashioned but which we could sorely use much more of in Our Age. -- Robert Faires