FC: A RECONSTRUCTION: SHARDS OF A MIRROR 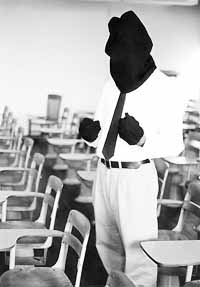 The sudden sucking sound that precedes a bomb's explosion. Fingers and hands ripped off in a sliver of time. And a brilliant, isolated soul orchestrating it all with mathematical precision. These are the haunting images left by FC: A Reconstruction, an intriguing new play by Tim O'Brien (not the Vietnam author), which patches together through a series of monologues the lives of three men before and after a bomb delivered by the Unabomber, Ted Kaczynski, ripped them apart. Named for the two letters that each Unabomber package bore, FC begins with an ethics professor, charmingly played by O'Brien himself, challenging the very nature of right and wrong. He posits a question: Is robbing a man of his autonomy the same as killing him? Of course you know the answer. At least you think you do, until from this abstraction he spins the usual professorial Socratics, that rhetorical sleight of hand which renders any answer unsatisfactory. From the gleam in his eye, you know this is his favorite game -- pulling out the bag of tricks, piercing the bubble of long-held beliefs at the pit of your belly. He has no tolerance for sentiment. That is, until his longtime friend and colleague, a science and technology professor, opens a package which disfigures him permanently. Delivering lines with a black bag over his hands and face, this victim recounts the sheer horror of the day he heard that dreaded sucking pop. And the small pivot of his body that changed his life irrevocably. We also meet the surgeon who eventually treats him, a man wracked with anxiety about his own ability, skating by on false smiles while demons of self-doubt circle overhead. At the center of it all is the Unabomber himself, Ted Kaczynski, holed up in his Montana cabin, waging his revolution against the technology he deemed lethal, ending the lives of the men he found expendable.

These four stories coalesce better than you might expect, with strong direction and lighting design from Nic Dimond, who guides our eye seamlessly from scene to scene. Unlike The Executioner's Song or other tomes which peer inside the black soul of a murderer, FC skirts the surface of the Unabomber himself. Indeed, Kaczynski's known writings and public demeanor point more to a chillingly brilliant genius (shades of Hannibal Lecter) than the manifesto-spewing madman portrayed here by David Meihaus. But this raging soul is used as an intriguing counterpoint to these other men, most notably the good ethics professor, whose denial of moral absolutes and society-by-rote doesn't lie too far from the deep end into which Kaczynksi sinks. In the doctor and the victim himself, we see the courage and the resilience that endures even in darkness. Despite its cerebral spin, FC always aims at the gut; in fact, it shows us that a balance of feeling and thought is the redemption Kaczynski lacks. Feeling, hope, struggle are the salves that hold insanity at bay for the other men in the play; it is only numbness that speaks with shadows. And in these men, there are deep pools of sorrow to comprehend. In many ways, they are shattered. But like shards of a broken mirror, they each reflect a compelling truth, at once dazzling and jagged. -- Sarah Hepola

My girl and I meandered up the narrow stairwell and into the club, Top of the Marc. The slowly rotating ceiling fans cast occasional shadows on the polished bar chest-high with its bottles of sin. Behind the set-up for the late shift swing band hung the ubiquitous silver lamé curtains as shiny and inviting as those empty rocks glasses stacked at the bar. The window pane near our darkened table reflected the orange glow of the Katz's Deli sign outside. We ordered our drinks: Scotch on the rocks for me, soda water for my date ... You can see how easily this could become one more Dashiell Hammett rip-off, can't you?

More tribute than rip-off is Murder by Design Productions' new serial mystery, Dick Private, Private Dick, in which the audience is treated to a play, a meal, and the chance to figure out whodunnit. Three writers share the credit for Dick Private (that's "pri-VAH-tay," please): Don Phillips, Jr., Paul Parkinson, and J.C. Shakespeare, and they're much better at capturing the ins and outs of the smoky, sleazy, often funny dimestore detective story so poorly parodied above.

As the title character, Shakespeare lends the requisite combination of world weariness, ladykilling good manners, and off-the-cuff humor to go with his nicotine-induced, deep-voiced delivery. Surrounding our private Dick are other easily recognizable characters: Lisa Robert plays Angel Darling, the bombshell chanteuse at the club where our drama is set; Kerry Tartack tackles Sal Piccolo, the bar's owner and Private's best pal from back before the war. Then there's Sammy "The Snake" Simonetti (Steve Busti), the local hood, with a funny if all-too-obvious-s-s s-s-speech impediment; and Willie the Newsboy and Stella the Cleaning Lady (both played with boisterous nasal twang by Jan Phillips). All serve to aid the ace detective -- and the audience -- in solving the crime.

The crime occurs when Private's war buddy, the quirky inventor and rube, Andy Fife (Johnny Moore), demonstrates his remote control devicefor changing channels on the hip new Television. Roberta Pattison (Stephanie St. John Lanza) portrays the dark lady who hires Private to spy on Andy for corporate advantage. Well, someone gets offed offstage, the drama unfolds, and you sip your drinks or eat your dinner until it is time to try to guess culprit and motive. Winner gets tickets to the season finale in the Driskill Ballroom this spring.

The evening is more than just a trip to the theatre, and it takes time for the story to unfold, but then, that's why there's a bar and dinner. Part of the slow pace may be due in part to the actors still getting to know their genre-specific characters. Lisa Robert's Angel is a little too shy with the men (and women) in the house during her voluptuous solo numbers, and she hasn't fully differentiated between her onstage and behind-the-scenes personas. Is she the rough-and-ready gal that sings to the bar's patrons or the slightly used-goods siren with the heart of gold? Kerry Tartack's Sal Piccolo is big of gesture, but rather thin as Private's sidekick. In fact, the company seems to share a need to get the text out immediately when the supporting cast might have fared better by allowing Shakespeare, a razor-sharp stand-up comedian, to indulge a little more in the extemporaneous musings and quips which he does with aplomb. When a police siren screamed past outside Katz's, Shakespeare immediately incorporated it into his grilling of friend Fife: "They're coming for you, Andy." Give the troupe a few more performances and the rhythm of the piece will no doubt get on track for entertainment in spades -- dare one say, in Sam Spades? -- Robi Polgar 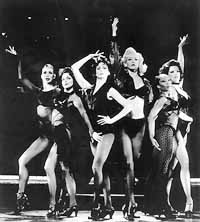 Watching this reincarnation of the Bob Fosse dance ethic -- legs, cleavage, raunchy glam -- it's easy to see where Madonna cribbed her act. The material girl's leather-cum-lace fixation with eroticism was Fosse all the way: surly goddesses gyrating on a chair, backlit by a wash of light. But Chicago, Fosse's 1975 tribute to murder, treachery, and the American way, is so much more than blonde ambition. Here, in one glittering production, we get not only the grinding pelvis, but also the raucous ripple of a slide trombone, the splashy dance numbers, the twisted humor of songwriters John Kander and Fred Ebb (Cabaret), and an able cast and crew to flaunt it all.

Based on the real-life trials of two killer cuties, Chicago recounts the story of Roxie Hart (Belle Calaway), a none-too-bright vixen who shoots her lover only to become a media sweetheart and the envy of murderous cellmate Velma Kelly (Mamie Duncan-Gibbs). With a landslide of publicity, Roxie's destined to rise to the big time -- that is, if she can just stop doing time. Calaway and especially the stunning Duncan-Gibbs coo, connive, and fan-kick theirway through strong performances, backed with some killer turns by Destan Owens as their smarmy lawyer and the wailing gospel of Carol Woods as jail warden Matron "Mama" Morton. In Ann Reinking's choreography, we certainly get an eyeful of that signature sexuality (erotic asphyxiation as a dance move, for example), but also of the impressively sensual movement of dancers working as one organism, either clumped and perfectly synchronized or each curiously out of whack, so that what you get is almost each body creating a larger whole: an arm spread-eagled on the right, a hip arced on the left, a woman bent over and eyeing you through her legs. A few numbers aren't as crisp as they could be, but the show still looks fantastic. Sometimes Chicago seems less a musical than a succession of crowd-pleasing routines, with precious little time to slow it down -- "All That Jazz" is followed rapidly by "Cell Block Tango" and "When You're Good to Mama," creating the kind of knockout that got Roxie behind bars in the first place. It's enough to make Chicago -- with hardly a set to speak of and spare yet powerful lighting design -- stretch its glittered gloves into the farthest corners of the huge concert hall and still get that razzle dazzle in your eyes. -- Sarah Hepola