In fact, later in life when Bugs and Daffy and Space Ghost became "kid stuff" and it was cool to sleep until noon on Saturday mornings, I was secretly relieved to discover the Sunday newspaper's comic strips. There Gary Larson's The Far Side and Berke Breathed's Bloom County offered appropriately silly replacements to Wile E. Coyote's slapstick. It was as if these comics were keeping up with my own budding sense of cynical humor. Not until I reached college and ran across Bill Watterson's comic strip Calvin and Hobbes and Matt Groening's TV show The Simpsons did I stop worrying about my seemingly childlike attraction toward cartoons. By then I realized that animation and cartoon drawing had massive audiences for every age.

However, when curator Charles Cooper and political cartoonist Richard Bartholomew put together the current exhibit on cartoons and animation titled "The Austin Cartoon Scene" at St. Stephen's Nancy Wilson Scanlan Gallery, I couldn't help but think that someone had gone too far. Surely, the masters of cartoon wit and wry buffoonery the gallery promised to "display" didn't belong in such a staid atmosphere. I mean, when was the last time you saw a comic book in a museum? Even so, after a visit to St. Stephen's beautiful, limestone setting overlooking the hills west of Austin, I understood that cartoonists and animators are first and foremost studied artists and that when we look at cartoons we are looking at fine art. If this work doesn't belong in a museum, then nothing does.

As far as Austin is concerned, the city is widely considered to be one of the foremost centers in the nation -- aside from Hollywood and New York -- for cartoon creations. To get a feel for the talent passing through town, consider the following: Berke Breathed, who won a Pulitzer Prize for Bloom County, started cartooning while a student at UT; Ben Sargent, the Austin American-Statesman's daily editorial cartoonist, won a Pulitzer Prize for his op-ed political drawings; Dreamworks' animated feature The Prince of Egypt and Warner Bros.' The Quest for Camelot were both completed at Don Smith's Heart of Texas Productions studio in Austin; Mike Judge, an Austin resident, has garnered worldwide attention for his animated series Beavis and Butt-head and King of the Hill. As for the computer gaming industry, which uses thousands of animators and computer graphic specialists, Austin is at the center of the known universe. The fact that there hasn't been a museum exhibition of this type of work in the past is the real shocker.

To be fair, "The Austin Cartoon Series" -- a first of its kind in town -- was unable to gather work from everyone who has worked in Austin in the past. Still, there are original ink on paper works, ballpoint pen sketches, pencil studies, silkscreen products, and storyboard layouts of 10 local artists. And though a few big names like Sargent and Sam Hurt (of Eyebeam fame) bless the show, you probably won't recognize the other names until you see their finished products, most of which are helpfully displayed beside the original drawings and animation cels.

Cartoons by Roy Tompkins, whose grotesque, R. Crumb-like figures animate the Chronicle's "News of the Weird" column, are on display, as are Bartholomew's political caricatures that have seen the cover of the Statesman's weekly pullout XL Ent. Then there are cartoonists such as Penny Van Horn, whose graphic comic creations have appeared in the Chronicle, XL, and national compilations such as R. Crumb's Weirdo, and Kelley James, an animator who has worked on The Simpsons and The Rugrats. A 4' x10' storyboard of work that James did on the TV show Hey Arnold for the Nickelodeon network is on display in the gallery. Throw in computer gaming wiz Lance Myers' silkscreen animation like Cygnus X-1 and Gals Panic, and you have a nice cross-section of work being produced in town. Not only that, but you also finally have a great grown-up excuse to go check out some cartoons. See you in the funny papers. 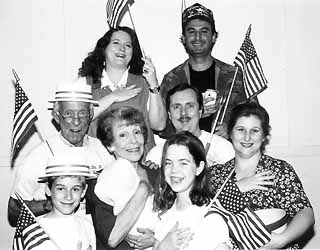 Written and directed by Ken Johnson, American Realism is the sweet -- if a tad trite -- tale of one extended family: At its hub are Margaret and Sam Fletcher, two happily married seniors enjoying their golden years in their spacious (and overly cumbersome) family home.There's also their daughter Helen and her drunk, caustic husband Mark, who eke out a blue-collar living for children Debbie Sue and Jason; and there's the simpering, can't-catch-a-break son Phillip and his coddling wife, Sue. On a series of Austin's summer Sundays, the family grapples with the decision of whether or not to sell their home, for which they're being offered a hefty sum by developers. It's a sweet deal, really, but one that would uproot the family and plow down the history built in their home's walls and buried in its cobwebs.

Johnson peeks in the many nooks and crannies of this dilemma, and the questions he raises can't help but resound. In this city saddled with paving the future while preserving the past, it's an issue we've all at least brushed past. Johnson also finds parallels between the poignancy of community growth and individual growth, and in the two children we see adults unable to let go of their parents' purse and apron strings and the sacrifices each family member must make to help them mature.

But American Realism, as staged here, is also not without its problems. It's performed at a plodding pace, and though the spunky Allen Lawshae infuses the proceedings with energy as Capt. Bill Hunt, an old family friend, when he's not onstage, the scenes often drag. Only in the touching moments between the senior Fletchers, played by Erin Kameron Coffey and Harv Morgan, is the pace well worth it, for what their delivery lacks in expedience, it more than makes up for in sweetness. But there's no counterbalance. And while the script smartly confronts the many-sided dilemma at its core, its characters are not written so delicately. A spun-from-stereotype real estate agent drives a cranberry Mercedes, sashays in on the day of her divorce dripping with champagne, and makes big-business deals in a blue sequined cocktail dress. This is all meant to tell us she's a money-grubbing bitch, but it's too much. Similarly, Phillip seems cobbled from the worst family deadweight clichés: He's a car salesman and deadbeat dad who maxes out his credit cards, owes every family member money, and whose life failures are owed to the fact that his parents couldn't foot his college bill.

American Realism is not a bad play. There is so much potential there, what with the topical issues it generously chews on and peppers with genuine moments of triumph and failure. When the show returns in March for a second run, it would be nice to find Johnson and his actors doing more showing and less telling, letting the characters' actions help us understand their plight, and layering the play with the things every family member thinks but does not say. The story is a compelling one, and it has the American heart; all it needs is the realism.