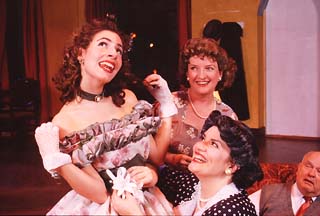 Like Alfred Uhry's best-known work, the Pulitzer Prize-winning Driving Miss Daisy, The Last Night of Ballyhoo is keenly aware of the Southern belle, her learned helplessness, the ridiculous endeavors she undertakes to secure her footing in society. It is also aware of the idiosyncrasies of the mythic South, in this case, 1939 Atlanta, the city abuzz with news of Hitler's invasion of Poland and the world premiere of Gone With the Wind. But for the Freitag household, and especially its widowed, iron-willed matriarch, Beulah Levy, all that matters is the upcoming Jewish soiree Ballyhoo, where she hopes to finally find a husband for her self-absorbed, misfit daughter Lala. The play would serve as a pleasant piece of nostalgia, but Uhry, who won the 1997 Tony award for Best Drama with this play, wants this story to be more. So he offers depth in the form of a storyline about prejudice and identity, and here is where the pleasant piece of Southern satire begins to quake. The Freitags are middle-class Jews trying to be upper-class whites, who have amputated their ethnicity and culture and are therefore indifferent to the plight of European Jews or the community as a whole in the States. When Joe, a Russian Jewish charmer from New York under the employ of Beulah's live-in brother Adolph, shows up on their doorstep wearing his ethnicity on his sleeve, his presence uncovers the depth of this family's shame about their own religion. Beulah viciously calls him a kike; and with this we see the level of her own seething self-hatred. Lala throws herself at him and then is burning with envy when her cousin and rival, Wellesley frosh Sunny, starts dating him. Lala immediately attributes this to Sunny's lack of Jewish features. But eventually, Sunny's own cultural ignorance threatens the relationship, which ends in an ugly spat about Sunny's hypocrisy and self-delusion. In this, the play's climax, Uhry asks us to swallow rather too much. It's difficult to sympathize with Joe, who was aware of Sunny's problems with her culture from the get-go. He is like a man who falls in love with an alcoholic, then rages at her for drinking booze.

This incongruency is sprinkled throughout the play, and it troubles this Zachary Scott Theatre Center production. Co-directors Joe York and Jill Parker-Jones show us they know how to play for laughs, but, like the rest of us, they seem unclear on the play's moral center. Therefore we are left with quite a bumpy ride, the story changing gears with all the grace of a 15-year-old learning stick shift. The sense of nostalgia is appealing, what with Michael Raiford's set, tinged with the stale yellow of an old photograph, the lovely sway and crackle of the old music, and the finely detailed period costumes. The performances are uniformly enjoyable (although a few actors do struggle with the Southern accent, if that sort of thing irks you), with Dirk Van Allen's crabby, lovable deadpan Adolph and Janelle Buchanan's ditzy, adorable Reba acting as strong anchors. I didn't personally enjoy the choice to play Lala (Emily Balanoff, kind of like Scarlett O'Hara on a cocaine binge) and her insufferable suitor Peachy (Michael Miller), over the top and into the wild blue yonder, but their portrayals certainly were in accordance with the script, and it should be noted that their hamminess and schtick got some of the biggest laughs of the night. Regardless, you get the feeling that these actors are struggling to breathe life into these characters and to find their hook. When the actors are given something to work with, the scenes really click. A nice moment finds Balanoff's Lala on the phone with Peachy while Barbara Chisholm's fretful Beulah anxiously looks on; the comedy is played assuredly, and we see instantly the dynamics and codependency of this mother-daughter team. Despite its unsatisfying resolution, the story that follows Joe and Sunny as they fall in love becomes a charming centerpiece, and Helen Merino proves a real surprise, giving a delicate and nuanced performance as Sunny. She is lovely to watch, and a nice balance to the histrionics of other members of the cast. As she fidgets and blushes, timidly and expectantly falling in love, you really wish she had more to work with, since what she's been given is so lovingly translated. Like Wendy Wasserstein's The Sisters Rosensweig and Neil Simon's Lost in Yonkers, The Last Night of Ballyhoo depicts the hilarity and charm of life's eccentrics and the fragile relationships between two people, but the politics and social drama seem to slip through the playwright's hands. Zach's Ballyhoois still commendable, however, essentially on the basis of its earnest performances, and for those theatregoers who enjoy the classic, wholesome slice of nourishing Southern nostalgia, it is especially recommended. It won't change your life; it might give you a nice break from it, though. --Sarah Hepola

I never knew Gallery Lombardi was so big. Nor, for that matter, did I imagine that a single exhibition could hold so many different mediums, forms, and styles of artwork. First of all, if you make it all the way through the gallery (that is, if you find all of it), you will have stumbled through a maze of rooms, into the main hall, up the stairs, and around a circular hallway. The work of 24 local artists can be a little dizzying. Moreover, by the time you finish, you will have seen acrylic on canvas, oil on canvas, watercolor on paper, pencil on paper, pastel, collage, monoprint, embroidery, pottery, photography, steel sculpture, limestone sculpture, wood sculpture, furniture, hand puppets, one fountain, three Kenkeni drums, and a candelabra. In all likelihood, if you don't find some art you like at this year's "Annual Christmas Exhibition," you won't find it anywhere.

As I walked through the door and came face to face with Tim Brown's Colo, a six-foot oil on canvas rendering of an angry baby staring me down with a menacing you-better-change-my-diaper look on its face, my first thought was "What have I gotten myself into?" Rounding the partitions, however, brought me to three of Lance Letscher's soothing, ethereal pencil on paper cutouts, and I was instantly caught up in the whirlwind of art surrounding me. There were Maria Lyle's Picasso-esque pastel portraits, and next to them, Nina Jolly's five frames of mono-print studies and three acrylic and charcoal portraits by Travis Lindquest, a member of this year's "Bucking the Texas Myth" group show at the Butridge Gallery. I passed into one of the back rooms, where some of Stella Alesi's up-close photographic realism hung, along with Linda Dumott's Vintage Ford, a bright and slick oil painting of one of the classic cars. Meanwhile, I kept passing everything from corroded squares of steel to Toasty Hancock's smoked clay animal figures.

When I finally came to the end of the main gallery, it took the friendly guidance of the proprietor, Ron Prince, to get me out into the downstairs hallway and up to the offices to check out the rest of the show. There I found Benne Rocket's scientific collage work, where painted-on details of the human brain offset silhouettes of 1950s-era beauty queens. Upstairs, Theresa Valera Muth's Love, Love, Love immediately caught my eye with its irreverent red paint bursting off the canvas and onto the wooden frame. Down and around the hallway brought me to Eliot Partridge's pastel work Anxiety, a playful, Dr. Seuss-like take on tension. Further on was the industrial photography of Bruce Hop and the experimental photography of Gay Shirkelford. Her dizzying print Florida, in which the artist twists the camera as the film is being exposed, is emblematic of the whole show.

Keep in mind that all the work in the "Annual Christmas Exhibition" is for sale, with some very reasonable price tags attached. If you haven't found all your Christmas presents, here's the place to go for that something to be remembered by. At the same time, even if you're not buying, this is a great place to get lost in the maze of Austin's art. --Sam Martin