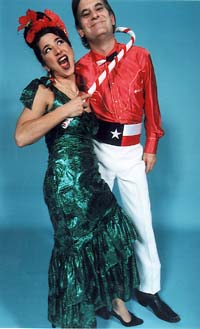 It's time again to pay a visit to the Pool. Yes, yes, the temperature has dropped somewhat severely as Austin celebrates its annual week-long seasonal shift most often referred to as winter that might leave most swimmers a bit reticent to take the plunge. But I'm talking about Esther's Pool, where the temperature varies from warm to hot, depending on the antics of this Austin comedy institution. And lately, it's pretty steamy in the old Pool.

If you've never been to Esther's Follies or have been away too long, now is a great time to catch the manic bunch in action. The Follies are 90 minutes of torrential nonstop sketch comedy that leaves nothing and no one unscathed by jabbing irony and dead-on parody. Toss in some astonishing magic, juggling, music, puppets (it's good to see Saddam Hussein continues to be shark bait during the always impressive finale), a large dollop of ribaldry, and plenty of audience participation -- including unwitting passersby on the street outside -- and you can see why the windows are steaming up at jolly old Esther's.

What with Christmas upon us, the Follies have added some seasonal material to the staple regimen of skewered current events and old standards. Best of this seasonal fare is Margaret Wiley's spinning of a Ukrainian Christmas Tale, incorporating talented (though unsuspecting) members of the audience. Wiley is best known for her alter ego, Chi Chi La Bomba, who muscles her epic, vixen-like way through the audience on a nightly pilgrimage to find the hunk of the evening. As the narrating Ukrainian, Wiley uses her charm and dark, ironic stare to entice our neophyte acting volunteers through the story of the nativity, Ukraine style, all pulled from a rather shabby cardboard box.

The ubiquitous box makes several forays onto the stage -- Wiley uses a dolled-up box to extol the many uses of maxi-pads in "Tammy's Craft Tips," and Esther's veteran Kerry Awn gets really, really mad pulling out misleading products from his own rather shabby box. Awn is the institution behind the hilarious South Austin Slide Show -- an intimate look at the romantic south side of our fair city -- which he leads with innocent charm and plenty of irony.

Besides this being the Christmas Season, it is also the Impeachment Season, and Esther's pokes fun at pokey Bill and snoopy Starr, among other major players, with none of the pokes in anything close to good taste: Perfectly in keeping with the real follies in our nation's capital. And speaking of poor taste, Blake Yelavich must be mentioned, too, for his side-splitting, prancing, jock-cum-equine ballad, "All Man."

However sharp the humor of the up-to-the-minute new material, it is the old standards that make Esther's so much fun. Besides Chi Chi and the South Austin Slide Show, Shannon Sedwick (Esther's producer and Follies "mama") continues to pull poignant and pointy memories out of her party dress as the returned-to-earth Patsy Cline. And it is Sedwick who cries herself a river as the show's over-the-top finale flows out onto Sixth Street in a whirl of mayhem, puppets, and naughtiness. Veteran magician Ray Anderson is outstanding: Part comedian, part illusionist, he creates mind-bending magic in that crowded Pool. So swim toward Esther's for a heaping seasonal helping of frank nonsense and mirth. -- Robi Polgar

After browsing the menu of artwork that makes up "New American Talent: The Thirteenth Exhibition" at the Texas Fine Arts Association's new Jones Center for Contemporary Art, one nagging question kept popping into my head: Are there any specials off the menu? On my return to the converted, but once lascivious Queen Theatre cum Lerner's department store, the receptionist at the front desk blushed as if I had eyes for her instead of the paintings, works on paper, installations, sculpture, and mixed media in the show. The former probably would have given me more to sink my teeth into. Again I went away hungry. After going a third time, I realized that while many of the pieces were appetizing enough, the show as a whole left me frustrated and empty.

Of the 40 artists and 66 works of art that Robert Storr, curator at the Museum of Modern Art in New York, selected for this TFAA survey, some were clever or playful. Some were boring. Still others simply went right over my head. In the end, the only morsel of reason I could come up with as to why my overfed artistic appetite had not been satisfied was that art has become a fragmented and most often cerebral outlook of the individual artist.

Consider Seattle artist Erik John Geschke's installation sculpture A Victim of Knowledge in relation to New York artist Michael Bevilacqua's acrylic paintings Fiery Plastic Passion and Supernova Dawn Pusher. The first is a carved wooden dummy hanging on the wall between two sculptures of open books; the second is a psychedelic collection of pinks, blues, and greens painted to look like the tail fins of a 1967 Cadillac, bumper stickers and all. While both works hold individual merit, Geschke's is a stuffy, conceptual piece aimed at a more intellectual audience whereas Bevilacqua's seem to target Ravers looking for a quick fix of visual information. The two pieces are as different as steamed broccolli and deep-fried gordita.

Making matters worse, the "New American Talent" exhibit provides no sense of direction on the American artistic horizon. Installation and site-specific sculpture such as Brooklyn artist Richard Bassett's Die Cut #1, an installment of gypsum, cement, and graphite wedges cross-hatched on the floor to look like a piece of woven basketry, and New Mexico sculptor Ann Lowe's galvanized metal construction Piano seem to offer the most succulent style of work in the show. And Houston artist Bill Davenport's colorful crocheted yarn sculptures Italian Ice Pop and Candy Tower Cover lend an original flavor to the medium. However, aside from sculptural similarities that deal with space and perspective, there is nothing between the pieces that promises any collective movement. It's like having all the ingredients for a pizza without the pizza dough.

Even so, many of the pieces were provocative enough to keep me coming back for more. John Salvest's Smoke Free -- which did not win the Philip Morris Juror's Merit Award without a few chuckles -- is a simple but sharp rendering of the American flag made out of cigarette butts. Dange Keeont's The Color of Sharon's Roses: A Landscape Painting is a disturbing canvas hastily rubbed with splotchy white gesso and with the words "Free Dope and Fucking in the Streets" scratched over the surface in pinkish-white letters. Also, Thedra Cullar-Ledford's Five Thousand Trashy Romance Novels, a sculpture the artist calls a portrait of her mother, is a cube of stacked romance novels under an enormous slab of black graphite. Cullar-Ledford's sculpturewon the other Philip Morris Juror's Merit Award.

To be fair, similar movements in art don't seem to get recognized until after they've been around for a while and history has time to catch up. Moreover, it would be impossible for any movement to occur were there a shortage of art. If the "New American Talent" exhibition is any indication, we don't have to worry about that. As Storr writes in his Juror's essay, "We have yet to reach the much prophesied 'end of history' or 'the end of art.' That's our problem. With everyone crowding together on the same uncertain footing ... it is anything but obvious where ... actual movement is occurring or direction is being taken." Perhaps history will look back on this period in American art and label it disjointed and fragmented. Then again, perhaps it will become a positive indication of the various ingredients our diverse, globalized melting pot. One thing we can be certain of, however, is that appetizers do not a seven-course meal make. -- Sam Martin 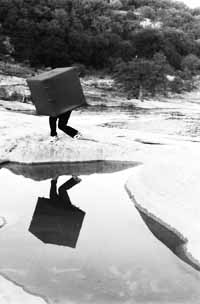 Anti-genres like the recent "experimental musical" Mexican Doll tend to fall through the cracks publicity- and attendence-wise, which in this case is really a shame. Rembert Block, best known for her work with the VORTEX Repertory Company, and Carter Thornton, local musician, have with this show co-created a raw, at times painfully personal, piece about the psyche of "The Addict." This minimalist, candle-lit show, which toured the East Coast before opening here, was developed through a series of improvisation and sensory perception exercises (e.g., "go outside, listen to crickets for half an hour; go inside, take copious notes"). These investigations yielded a collection of characters that includes a destroyed yet emotionally complex addict, an accordion-playing red box, a much-maligned mother-figure, and a heartless therapist, played for comic relief by a deadpan Thornton. An hour about self-destructive "mind chatter" may sound decidedly un-fun, but the agonized theme is cut by the duo's powerful stage presence and tempered brilliantly by the music, which incorporates tape loops and several orginal songs. Running the gamut from a heart-breakingly desperate version of "'Round Midnight" to a stirring punk anthem, "Fuck Off," (which was purportedly a big hit in the bars they played back East), Block's opera-trained voice and Thornton's expert instrumentation make this show worthwhile even as a straight concert. One caveat: Mexican Doll plays in an at times chilly warehouse in East Austin, so bundle up. -- Ada Calhoun