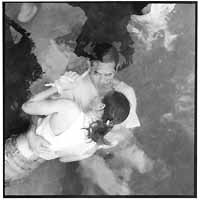 For its 16th season, Sharir Dance Company, the popular modern dance troupe, has undergone some changes. It is now guided by two creative forces, with José Luis Bustamante a full artistic co-director alongside Yacov Sharir, and it has taken a new name to reflect that dual leadership: Sharir+Bustamante Danceworks. It's fitting, then, that this season premiere is about duets, about the essential beauty and drama inherent in the interaction between two people -- no doubt somewhat indicative of this collaboration of willful, artistic minds.

As one expects with this company, the performance blended several dance styles. Movement is the essence here: how the body moves, how it's affected by outside forces. With these duets, that force was often another person, but it also took the form of hypnotic, forceful music and raw human emotion.

The showday's big event was the premiere of Sharir's D-U-O-S, a lengthy and physically challenging new work that filled the second half of the show. D-U-O-S was composed of seven sections of duets, linked together in fluid succession. The first began with a video of two dancers performing in water, then segued to the same dance being performed onstage. See how different the same dance appears under different conditions, it seems to say. As the dancers flowed from "Currents" to "Move down -- Check out" to "Listen," it was simply impossible not to fall under the hypnotic trance inspired by the sensuous music and moving bodies. "What is it, this desire to move?" dancer Terry Hardy asks of the audience in "Listen" and we are challenged to think. "Listen! Can you see it?" Hardy's inquisitive wordplays were the classic stuff of Yacov Sharir, a master at testing people's limits, both physically and emotionally. This company is full of strong, expressive dancers who can communicate more with their limbs than many people can with words. The double force of Hardy's powerful movements and potent queries was riveting.

Although the costumes look to have been inspired by a Star Trek fan -- tightly fitted long-sleeve padded metallic tops and black leggings -- they were appropriate in their simplicity, and the metallic colors were wonderfully vibrant and reflective. The original music, composed by Larisa Montanaro, provided the perfect lyrical backdrop to the motion onstage.

Preceding D-U-O-S were three short dances, the first of which was Bryan Green's In the Gallery of the Soul, which he choreographed and performed in with Hardy. The piece, which premiered in Sharir's 1996-97 season, proved even more captivating two years later. Green and Hardy appear to be sleeping in an upright bed. As they slumber, they stretch, roll, and move about, sometimes in sync with each other, often autonomously. This work sheds light on the simple, poetic beauty in everyday "pedestrian" movements. La Ventana (The Window) followed, featuring Andrea Beckham and Roxanne Saenz Gage in a lovely sequence they choreographed. The two women interacted both playfully and tensely, appearing at once feminine and androgynous. Segment three saw the return of Adversity, a duet by Sharir taken from his 1994 piece Sine. Featuring Green with Carolyn Pavlik, the dance communicates the fundamental force and tension behind human relationships. The adversity came from the dancers themselves as they gestured at each other with acceptance and disdain, love and disgust, seeking to hold and purge each other at the same time, while fast-paced percussive-heavy music urged them on.

Duos Danceworks was a powerful beginning to a crucial year for the troupe. It appears that the company's internal changes have strengthened these artists' seemingly boundless exploration of human movement, proving that sometimes two brilliant heads are better than one. -- Cari Marshall

ALL MY SONS:HANG IN THERE 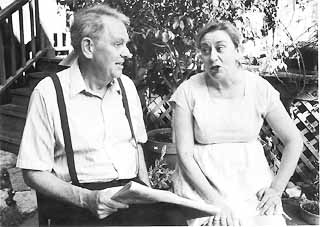 Those of you frustrated with that loosey-goosey postmodern theatre, take heart: Classic narrative drama is alive and well in Different Stages. Following the group's successful runs of Tom Stoppard's brilliantly wry Arcadia and Giles Havergal's frothy Travel With My Aunt, Different Stages now tackles the golden age of American drama through Arthur Miller's first theatrical success, All My Sons. A shocking psychological tale of moral compromise, Miller's play is also an intensely difficult drama to master. A production's success depends on its ability to convey a huge amount of subtext delicately, without melodramatic gestures or hammy delivery. For at the heart of this post-World War II drama is self-delusion, the way it can thrust a man into success even as it erodes his soul.

Typical of this self-delusion is Joe Keller (Wilson Wade), a wealthy artillery manufacturer and father of Larry and Chris (Joel Crabtree), two patriotic young men who left to fight the great war. Only one son -- Chris -- returned, and Joe is mourning the loss of the son who died. But Joe must also wrestle with his conscience, for during the war, he and his partner Steve Deever were accused of knowingly selling faulty airplane parts that caused the death of 21 soldiers and he let Steve take the fall while he pleaded ignorance and returned to the roost. And Joe must also contend with a wife who is crippled by fantasy, convinced her son Larry is not dead, merely missing, despite a three-year absence. All this denial is threatened by the return of Steve's daughter and the high-school sweetheart of Larry, Ann Deever (Rebecca Robinson), and, later, her brother George (Tom Bain, at a curiously low volume), both of whom seek answers and vindication for either the imprisonment of their father or the reality of Larry's death. All this comes to a head in a long day's journey into explosive emotion, in which wounds are ripped open so that a necessary, if tragic, catharsis may occur.

For my money, most Arthur Miller plays are worth seeing; his work not only crystallizes the social climate of his time (and in some ways, all time), but shows us what happens when the person we may imagine we are (beautiful, moral, successful) collides into the reality of who we really are. Unfortunately, in his production, director Norman Blumensaadt adds little imagination or depth to the already-known classic. With merely adequate set, sound, and lighting designs, and nothing to indicate any particular relevance to Austin today, it makes it difficult to understand exactly why this play is worth revisiting right now. I know, I know, it's Arthur Miller, and he's brilliant, and his plays should be seen. I agree. But the fact that this is the only answer to be found here is ... well, disappointing.

With that in mind, the production is nonetheless filled with genuine treats. Not the least of these are the two solid performances from the male leads: Wade as the conscience-stricken Joe, who goes from a self-possessed and confident man to a crippled and broken child; and Crabtree, who gives a deft and confident performance as the son Chris. Another treat is discovering that, despite an unnecessary second intermission, the finale still delivers a wallop, an explosion worth the two hours-plus of simmering. Credit for this belongs to not only an enduring script, but a cast of actors who, even when they're down, hang in there. In the end, it's a decent production, but one I can really only recommend to two types: die-hard Miller fans and those theatregoers who are simply confused by what "those kids" are doing onstage these days.