With mischievous delight, the performers scramble around the two huge boxes, frantically hovering and grabbing for whatever is inside. To their amazement, out comes unidentifiable objects. After a brief inquisitive pause, a pair of ballet slippers is proudly donned as bunny ears, a tampon is feverishly smoked as a stout cigar, and a featherduster is delicately transformed into a powder puff. The audience roars with laughter.

Unlike Pandora's mythical box, which held the unforeseen ills of humankind, KINESIS Dance Theatre's Gender Boxes houses humorous social-political vignettes. Under the direction of Toni Bravo, Gender Boxes addresses gender issues through a vaudeville-like experiment in entertainment. Set to songs by Nat King Cole, the first two sections of the work possess the comic flavor of pantomimic movement found in the silent films of the1920s, yet they present a skillful splash of today's emphasis on political correctness. The third section offers a hopeful glimmer of modern life on equal terms.

T.A.N.G.O.H., a motion picture tale of courtship, marriage, and the ensuing power struggle that either makes or breaks a relationship, appropriately utilizes the tango, the "dance of love," as the medium of expression. From a duet to a round-dance mixer, the piece creates a literal and metaphorical space in which the audience and performers uniquely share the dance together.

BOXES cleverly comments on our society's unrealistic standards of femininity and masculinity. Of the vignettes in this section, Browsing/Car Lot (text and concept by MeriJayd O'Connor) and Tint & Alarm (performed by Jose Medina, Dawnerin Larrimore, O'Connor, Cinnamon Parsons, and Melanie Dorman) wittily portray our obsession with "hard bodies." Perusing a human car lot, the female buyers size up four male bodies fixed in seductive poses, ready for sale. Viewing the first hunk's rear, the buyer exclaims, "This one needs a new seat!" Gazing at the second model, another woman vents in disgust, "This one needs a new body." In Tint & Alarm, the roles are reversed, but here the women pose as vehicles with tinted glass and alarms. The buyer saunters over to the first vehicle and peers through the windows only to be startled by its alarm, which repeatedly blasts "Armed with estrogen, armed with estrogen." Immediately, another alarm echoes, "Step away from the vehicle, step away from the vehicle."

PEOPLE WALK/EQUAL broaches the theatricality of BOXES with a welcome full-dance section. Leading off with a rejuvenating calypso beat, three male dancers perform eclectic footwork complemented with inviting Caribbean gestures. Prophesying the beauty of life experienced on equal terms, the lyrical choreography conjures a sense of joy and happiness, a fitting way to end the performance on an uplifting note.

Gender Boxes is in step with KINESIS Dance Theatre's desire "to foster an awareness of world events and to extract humor and beauty from daily life." KDT does not espouse or attain virtuosity in technique. It does not offer sleek, athletic dancers who can leap across the stage in a single bound. KDT is not a purely aesthetic phenomenon. However, KINESIS Dance Theatre does enlarge the view of dance as practice, as a voice for political change. And that is just as important as flying through the air! -- Barbejoy A. Ponzio 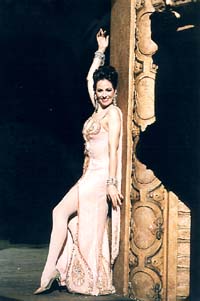 A thrilling and poignant showbiz musical about theatre people and for theatre people, Gypsy continues Austin Musical Theatre's ascent as one of the city's touchstone artistic companies. Set during the Depression, the play charts the unraveling of vaudeville along with the careers of brash Mama Rose and her two bright-eyed daughters, the beautiful, ebullient June and awkward, tomboyish Louise. Like Singin' in the Rain and A Chorus Line, Gypsy skewers the business while offering sympathy to those consumed by it, in this case a stage mother who sells her daughter into stripping. Rose cuts a complicated protagonist these days; she's the kind of can-do single mom the Nineties are so sympathetic to, burning with vision, eating dog food to keep her girls in chow mein, singing about the quiet, passerby life of "Some People" and removing every obstacle in her way. Thrice divorced and scrounging for money, Rose will do anything to see her girls' names in lights -- including romancing the mild-mannered Herbie (David Ruprecht), a former agent drawn to Rose's fire and honesty. But as the girls grow, that go-getter self-assertiveness turns into something dangerous and grotesque, a desperate attempt at fame in which any sign of emotional and mental development in her daughters is stunted. Of course, the terrible thing about Mama Rose -- and really all such stage mothers -- is that she is ramming her children into her own dream, yapping about her own sacrifices and then seething inside when no one notices her.

As Rose, Pamela Myers is a wonder, working the audience into her graces only to push them away at exactly the right moment. The quality and intonation of her voice recalls Ethel Merman, whose meaty vibrato in this role has a cement handprint in the collective psyche, but her performance is her own, evoking, like any tragic hero, pity and fear, a sadness for her wilted dreams and a loathing for her despicable self-delusion. As the milquetoast-Louise-turned-Gypsy Rose Lee, Lauren Hathaway is stunning, a sad and sensitive second fiddle who eventually finds the affirmation she craves in taking off her clothes. Truth is, Gypsy projects a dim vision of what the lust for fame -- or more crucially, love and attention -- can drive people to do, so that when the time comes for the inevitable resolution of the play, it's actually fairly depressing.

That's not to say that Gypsy isn't funny and often light-hearted -- book writer Arthur Laurents and lyricist Stephen Sondheim (and AMT co-director/choreographers Scott Thompson and Richard Byron alike) know what keeps people in stitches, and while the first act offers uproarious send-ups of vaudeville, the second act holds showstoppers like "You Gotta Get a Gimmick." Aside from those, though, Gypsy lacks the big song-and-dance numbers of most large-scale musicals. But this production never sags, due to both the strength of the performances and the quality of AMT's work, which delivers the sweeping score and glittering costumes and sets that explode on the Paramount's intimidating stage. Briskly moving through three hours with an emotionally charged second act, Gypsyproves Thompson and Byron had a dream -- and now, it is ours to share: Enjoy.
-- Sarah Hepola 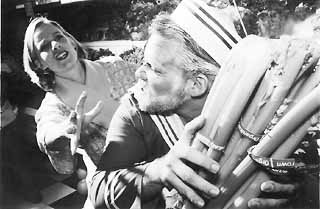 The much-anticipated third course to Rude Mechanicals' Faminly trilogy is served. And with it, Rude Mechs' playwright-in-residence Kirk Lynn has honed another intelligent and boisterous concoction surrounding family, famine, and
a mysterious and much-desired bottle of wine. With an ever-increasing mess of double crosses, double entendres, and seeing double, Salivation pours out all over the stage (and theatre) like a bubbly intoxicant.

It isn't all easy going, however, and in throwing so much material in so many directions, the show lacks a certain aesthetic consistency. The play is a cartoon, a puppet show, a bawdy, sloppy, rowdy, goofy dream come true, with a sentimental tinge at the end. Because it encompasses so much, the play sometimes gets away from comfortable storytelling, reveling instead in what amounts to petit cabaret skits or sideshow acts. Sometimes the skits work, sometimes they don't, but they're all infused with Rude Mechs' patented energy and verve. There is an early homage to Theatre of the Absurd: bizarre grandparents who appear from behind upstage curtains and screen recall Nag and Nell from Samuel Beckett's Endgame, but that quickly metamorphoses into Rude Mechs' folksier sense of absurdity. Theirs is a colorful and multidisciplinary playpen, made even more garish and fun by set designer Ann Marie Gordon and costume designer Marit Aagaard's bright, zany, over-crowded house with its host of desperate residents and unexpected visitors.

Anne Engelking makes a sympathetic Gerta: desperate for food, growing agonizingly large during her rapid pregnancy. Robert Pierson, as her husband Paul, is as clumsy as Catherine Glynn's thief, Al Jeers, is smooth. Joey Hood makes a warm and fuzzy grouch of Jeers' robot sidekick, Moods. Playing Grammy and Grandaddy, Madge Darlington and Michael T. Mergen put the most energy and foot-stompin' enthusiasm into the play. Playful with a slightly wicked competitive streak, the oldsters skirt lunacy with a youthful recklessness. Director Gavin Mundy handles most of this variety show well, with a sense of good-natured precision (gotta know when to make the mess).

Playwright Lynn starts his play off with a bang. That's a pun (when you see Salivation, you'll get it) and herein lies much of the fun, and frustration, of the production. Wordplay for Lynn takes precedence; verbal gags, prosody, and quick witticisms work (or don't work) the instant they are uttered but rarely beyond that. Lynn is so clearly a smart playwright, but he tends to wear his cleverness on his sleeve. Rare are the moments when his genius is subsumed by character development or narrative; the jokes become the focal point. In staking so much on these disconnected word games, the play's rhythm becomes staccato, the storytelling unfulfilling. It is not until the last act that the various threads of earlier wordplay are twisted together, when the audience is treated to the variety of enjoyable machinations and discoveries that leave such a good taste in the mouth. -- Robi Polgar