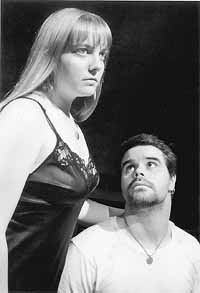 Watching Aaron Brown's latest play Norm L., it's near impossible to ignore flashes of a certain Wyoming lynching less than a month ago. The story is of Norman Lathum (Matthew Patterson), an articulate gay man who moves to a small city of friendly, church-going townfolk. The inhabitants seem like mightly fine people, but for one small thing: They don't tolerate homosexuals, and they take care of the problem. Eventually, they kidnap Norm, close a hinged box over his head, and begin a sexual and religious indoctrination designed to cure him of the "disease" of homosexuality. To awaken his latent masculine urges, they send young, nubile Samantha (Amie Elyn) to seduce Norm. As Norm's dignity erodes, he relies on fond memories of a failed relationship with Joe (Gabriel Maldonado) to restore his reality and resist his torturers. Meanwhile, Norm's fretful mother Madge (Anne C. Putnam) scours the city for her son, running smack into the brick wall of bureaucracy and doublespeak as she slowly unravels the horrid truth of her son's confinement.

Given the subject matter, Brown's script is surprisingingly fresh and funny, armed with a distinct humor that eases its weighty thematics. His portrayal of radical conservatives, however, falls prey to the standard clichés: They dress the same, spew the same rhetoric, bully their wives, repress homosexual urges, etc. Sadly, many of those clichés are true; conservative radio ads make the preposterous claim that homosexuality can be cured; bumper stickers proclaim "Hatred is a family value." As the gay population has moved more assuredly into the mainstream, an equal and opposite force has mobilized to shut it out. It is a frightening reality that we often forget in Austin, where pictures of militant protesters screaming "AIDS kills fags" look like a shameful past, rather than a troubled present. That's all to say that perhaps Brown's portrayal of these people is more accurate than we'd like to imagine - so seething with spite, so desperately burying their own sordid urges that they must lash out with unspeakable acts of violence. But the religious men Brown depicts seem propped up for us to jeer at, to confirm what we - the more enlightened theatregoing public - always suspected about those lecherous religious righters. A more humane portrait is afforded the women, especially the angelic Samantha, who represents how delusions of salvation can pervert even the best intentions. But it is frustrating that the play lends little insight into how or why this phenomenon is infecting our country, and how good and caring men fall under the sway of monsters.

But let's back up. This is not a play about Matthew Shepard. It is neither a play about the psychology of the religious right nor a play explicating the long human history of evil. Rather, it is about a man trying to fight against all this, trying to live a "normal" life as a gay man, longing to embrace his homosexuality but still wracked with shame about his so-called alternative lifestyle. At the bottom, Brown has a message for all of us: Listen to your heart; don't let anyone force their principles and values on you. As Norman, the struggling and persecuted protagonist, Matthew Patterson turns in another fascinating performance in a demanding role. Other notable turns include Dianna Dorman as Judith, wavering in faith despite her husband's zealous ranting, and her docile daughter Samantha, who cares for the ravaged Norm like a child tending to a lost puppy. While Anne C. Putnam, as the loving and sometimes misguided mother, gives an earnest performance, the storyline, which calls for her to have the same conversation with nearly everyone, goes on way too long and, instead of adding to the suspense, dilutes the conclusion. In fact, there are simply too many variables here, and the chilling story might be better served by focusing more on Norman and examining his relationship to his own sexuality, the subject Brown explores with the most expertise. Despite that, this risky, provocative, thoughtful play provides plenty to chew on and proves once again that Bonnie Cullum's VORTEX Repertory Company is one of the boldest theatres in town. No, it doesn't explain how to restore our faith in humanity amid the violence and horrors in the world. But it does explain, maybe, that the only thing we can trust is within. - Sarah Hepola

THE VISIT: SPOOKY YET COMFORTING 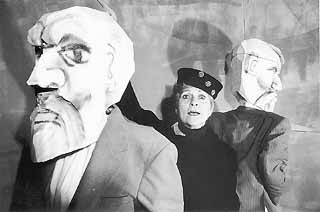 Capitalism certainly has it good these days. There's a market for everything; anything can be bought. Thankfully, the day-to-day sexual peccadilloes and earth-shattering misdeeds of great men and poor have no bearing on the world's ability to make a buck. Who can blame a good businessman or woman for triumphing financially at the expense of others? It's the game we all play - or wish to play.

For the townsfolk of Guellen, it is a game long lost. The former golden town has hit on hard times, inexplicably, amidst the tremendous growth of neighboring boroughs and cities. As it languishes, Guelleners recall the headier times of the past and hope to change their fortunes with the arrival of a prodigal child: Claire Zachanassian, a limitlessly rich woman who could wave her golden wand and restore the glory of Guellen. She ran off as a teenager, made her fortune, and is paying her old town a visit.

The play begins at the railway station, where now only a local commuter stops: The fast trains to the big cities rush past in a blur of missed opportunity. The locals have plans to dress up the town for Zachanassian's arrival: Events will be staged; the mayor will wear his top hat and carry his little grandchildren to the station; the band will strike up as Madame's feet land on her native Guellen soil. A well-executed, last-ditch attempt to save the town from its insidious poverty is in the works. The expectant townspeople knows this is their last chance.

Zachanassian's unexpected early arrival hints at worse to come, however. From the moment she enters, she takes over the poor town, porting husbands, butler, a wild black panther (caged, for now), and a couple of odd little men who chirp in chorus. Quickly, we learn that Madame is willing to bestow on the town and its inhabitants the inordinate sum of one million pounds - half for the town, the rest to be shared equally among them - if they right the wrong that led to her teenage estrangement. Kill her former lover, the local shopkeeper and wildly popular heir to the mayorship, Alfred Ill, and they can collect. Ah, capitalism! The contortions that the Guelleners undergo make what follows at once hilarious and quite sinister. Slowly, the town turns to gold - on credit, no less - in anticipation of the inevitable. Getting there makes for great theatrical fun.

It's productions like this by the creative and comradely Refraction Arts Project that exemplify the best of Austin's grassroots theatre style. In the meandering backyard of the Black Mountain College - a South Austin house with a history of artisan residents - a badminton court has been transformed into a stage. Not just any stage, but a two-level stage with an accompanying two-story, fully painted curtain. To get to this venue requires a mysterious trek down a side street, past guard Dana Younger (the director who invites you to sign the waiver), along a rutted luminaria-lit path, and into the heart of the college grounds (complete with campfire). The theatre is a few paces further down a plant-lined alley. It's almost spooky, yet somehow simultaneously comforting.

What you get onstage further typifies grass-roots Austin theatre. Everything needed to tell the story is there, regardless of how beat up or simple. Director Younger, his design team of Scott Wilcox, Sam Webber, and Kingsley Eliot Haynes, and the ensemble utilize masks, overstuffed costumes, too much makeup, false moustaches, beefed-up women playing beefy men, twig forests, and the cool Austin night air. The storytelling is fun, brisk, stripped-down, with playful accompaniment by the Barkers, the equally gregarious live band. The acting is heartfelt and disciplined without necessarily being technically adept. Kirsche Dickson's choreography, like the music, heightens tension and infuses comedy into the grimmest of situations.

Younger works Friedrich Durrenmatt's emblematic text (most of the characters are types: the Butler, the Doctor, the Schoolmaster, et al.) to find moments of great pathos and danger that blend well with the inherent irony of the piece. And although the characters are drawn of a single hue - usually clownish caricatures of people's worst instincts - there are several strong performances, including Jessica Hedrick's Mayor, a fawning politician with a plausible excuse for every misdeed, and Sam Prince's Ill, for whom the world collapses nightmarishly. Ron Berry contributes the evening's most extraordinary turn as the Schoolmaster, the town's conscience overwhelmed by the increasing mob mentality and inevitable, damning conclusion of the whole affair. Lana Dieterich plays the dowager with cantankerous zest and delicious irony throughout - perhaps too much; the artificial woman that is Madame Z. seems to overshadow the humanness of the actress.

This is one of those shows that should live in the Austin consciousness for a long time. So hop the fast train to Guellen and make your own deal with the devil. - Robi Polgar