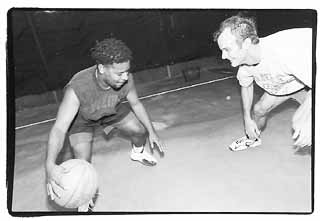 The worst thing you can say about Austin playwright Clay Nichols' O.T. is that its title (short for overtime) in no way does justice to the play's moving treatment of the prickly racial, emotional, and mental dilemmas with which its protagonist Tres (Jim Elliott, in a wholly believable performance) must grapple.

A thirtysomething Dallas native, Tres returns to the roost with his girlfriend Elizabeth (Amalia Stifter) after having lived with her in Chicago. But as any Dallasite knows, such a move is more complicated than tucking the glassware away and getting the couch up the stairs. See, Dallas is its own animal, replete with big hair, big malls, big society, and small minds. It's also filled with gems, but to newcomers, Dallas is often ugly and vapid, its pockets of golf-playing, moneyed businessmen only counterbalanced by the neglected inner-city neighborhoods -- the only corners in Dallas where a behemoth cineplex and a Macaroni Grill won't be built. While cosmopolitan, good-natured Elizabeth struggles to adjust in the land of the Cowboys and Southfork Ranch, Tres searches for his own peace. Perhaps to make himself feel better, perhaps as a genuine act of altruism, he begins a Big Brother-type relationship with an inner-city black teen named Pip (convincingly played by a much older Zell Miller III). With little common interest or ground, the two take to the basketball court, playing a game in this neutral zone which holds significance for each of them: Tres, because of his years playing star high-school and later college ball at Princeton; Pip, because hoop dreams of big contracts and the NBA continue to make the game a proving ground.

In building the tenuous bond between these opposites, the production captures some lovely moments: the blush and cringe on Pip's face as Tres flexes his own hip-hop lingo, Tres' awkward but touching efforts at brotherhood, or parenthood, or friendship. The problem is, Tres doesn't know which he is -- so he clumsily straddles each role: buying overpriced tennis shoes but letting Pip drink a beer; running his mouth about a bitch at work and scolding Pip for using the same language. Tres is a man in limbo, uprooted, unsure of his place, unsure of what he can give, or what he wants or needs. And to escape that reality, he lapses into the simplest comforts he can find: hanging around with old high school buddies, telling the same old jokes, complaining about women, and playing basketball. The play is less successful in negotiating these groups, employing stock characters and clichés to illustrate the mindless groupthink of white males. Yet these scenes also offer moments of humor and manage to convey basketball as the centrifugal force in each relationship.

All this is reflected in the set, bookended by two basketball nets: one in the upper-class North Dallas suburb where Tres resides, the other smack dab in the South Dallas 'hood. They represent the physical and social boundaries between race and class that, no matter how deplorable, have come to serve some purpose: Whenever an outsider crosses over (Tres to the South or Pip to the North), it has implications, complications. Normalcy no longer exists; their balance is thrown. Between these extremes is the home Tres shares with Elizabeth, which at times represents the only blessed equilibrium he can find but too often represents the way in which Tres, in trying to bridge the worlds, loses both. In fact, O.T. is most moving in its depiction of how quickly things important to us can slip away -- from sheer stupidity or misguided anger. Be it friendship or love or our own integrity -- our best intentions often go horribly afoul.

A word about the basketball. The cast must be lauded for seamlessly accomplishing what I consider a demanding task: dunks sunk or missed on cue, three-on-three games played out -- and not just once, but repeatedly throughout the story. However, I became obsessed with the basketball, failing at times even to listen to the dialogue. I worried that actors would miss their shots or lose control of the ball. It was, in many ways, a distraction. It was also, in many ways, a thrill. Maybe my reaction is merely a testament to the hypnotic quality of a game that I wouldn't give two nickels for most days. I came to see the comfort of a place where winners and losers are determined by a handbook, where decisions are based on tangible facts, where the ever-blurry complications of right and wrong can be dissolved with the swishing sound of a net or the tinny thonk-thonkas the ball and anger and fear and hope are pounded out on the concrete. It's enough to make you long for another chance for Tres, losing his world but fighting with honesty learned late in the game. It's enough to make you hope for a little overtime. 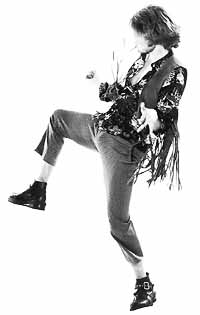 There was not a disco ball revolving to the tunes of the Bee Gees, no strobe lights illuminating the disco floor. There was just litter -- and lots of it! Litter dropped from above on the dancers. Litter thrown, blown, and swept at the audience. Attention-getting? You bet!!

Tapestry Dance Company's Stayin' Alive! cleverly endeavored to draw the viewer into the world of the performer through the use of humor, eclectic choreography, and a storyline which addressed contemporary life issues. Using a scant glimmer of the Seventies as a springboard for a leap into the Nineties, this narrative hinted at the increasing complexities of life choices as the millennium approaches. Stayin' Alive! entertainingly billed relationships, work, the environment, and spirituality as the stars of this performance.

The choreographers -- Deirdre Strand, Acia Gray, and Nicholas Young -- presented the movement script in three sections: Yea/Nay, site lines.net, and Say Nasty. The performance was off to a running start with the opening piece, which included all the company dancers. Traveling from the back of the Paramount Theatre through the aisles, the dancers took the onlookers' gaze with them as they joined in the upbeat music and myriad of dance forms performed enthusiastically by the dancers onstage. Unfortunately, except for Melissa and Vladislav Glouchkov's technically strong, modern/balletic duet Ready, the ensuing pieces of Yea/Nay did not sustain such an attentive hold.

Stayin' Alive! really began with site lines.net and continued with Say Nasty. Utilizing retro and contemporary music, these sections best reflected the issues of our lives through dance. Executed to Paul Simon's "Slip Slidin' Away," Young and Gray's virtuosic tap duet emphatically depicted the ongoing battle between individuality and conformity. During Conformity, these retro tappers' sense of self wavered to the swollen ranks of today's alienating technological age. Encased in white, sterile suits and dominating center stage, these militant soldiers of conformity vigorously tapped confining linear formations to overpower the nonconformists. Young and Gray succumbed to the pressures of conformity by briefly donning the white suit. This techno-soap opera came to a compelling end when all the dancers executed an awesomely clean, sharp finish in unison.

Say Nasty tackled the trash in our environment. The dance was not abstract. The point was made clearly. There is too much litter in the world. Litter fell and covered the entire stage, plus the front rows of the theatre. Through the use of humorous antics, the dancers cleaned up the stage environment. Of the three pieces performed throughout the litter's entrance and exit, Recycle swept up most of the applause. The piece was distinguished by its humor, witty choreography, and skillful execution of tap and stomp. The six dancers -- Gray, Young, Karen Honcik, SethJohn Davis, Anna Carapetyan, and Molly MacGregor -- danced in superb unison with powerful, clear rhythmic sounds. Not only did they master their feet to move in precision, they also successfully manipulated various challenging tricky twirls and lifts with their brooms, eventually capturing them in mid-air.

Tapestry Dance Company accomplished the difficult task of expressing thought-provoking issues through eclectic and entertaining movement. Sprinkled with humor and embellished with innovative transitions between dances, the enticing choreography could have been better delivered throughout if more of the dancers had kept up with its demands. Gray, Davis, and Vladislav Glouchkov's engaging performance attitude commanded the audience's attention. Nicholas Young's wild, golden tresses detracted from his talented performance. Beyond that, Stayin' Alive was an enjoyable and memorable performance, unique and one of a kind. -- Barbejoy A. Ponzio