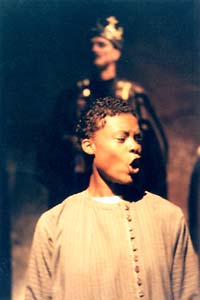 Perhaps you've found yourself on a journey, one that you knew would take you over many miles and into unfamiliar territory, and after traveling for some time and being on the road much longer than you'd expected to be, you've found yourself spent from the effort of traveling and no longer able to sense what fulfillment might lie in actually reaching your destination. Then, you crested a hill and unexpectedly, it was there, the place you'd been striving to reach for so very long. And in an instant you were revived and there awakened in you that sense of why you took this road, what this journey meant.

The journey of The Winter's Tale is certainly down a long and winding road. Shakespeare stretches the action over many miles and two decades, from the land of Sicilia at the moment a king succumbs to a mad fit of jealousy and accuses his wife and dearest friend of betraying him in love, throwing one into prison and nearly killing the other; to the land of Bohemia, the country ruled by the wronged friend, at the moment when the infant daughter of the jailed queen arrives on its shore; to Bohemia 16 years later, when the lost girl, having grown up unaware of her history and noble blood, and believing herself a shepherd's daughter in love with a prince, learns her true identity; to Sicilia again, where the lost one returns -- along with her prince and his father and a servant loyal to both kings -- and is reunited with her penitent father and their family is restored, in ways they could not have anticipated.

As a play, The Winter's Tale is not that much longer or more tortuous than many others that the Bard penned, but its epic scope -- the broad spans of season and geography its characters must traverse -- give it a more protracted and convoluted feel, a weight of age and exertion. Moreover, the emotional terrain that it navigates -- suspicion, jealousy, rage, grief, remorse -- is arduous and stony, the kind that is keenly felt by a traveler and that wears on him. But if it can be negotiated, this long and winding road has at its end a remarkable destination, a place of forgiveness, where hearts are cleansed of bitterness and hands are clasped in love.

As we travel on this journey guided by the Austin Shakespeare Festival, a kind of courage in the company becomes apparent. It can be seen in the way the artists invest themselves in the story and in its challenges, not shrinking from risks, but striding into them commitedly. Confronted with the difficult -- make that all but unplayable -- green-eyed fury expressed by Leontes toward his good queen Hermione and King Polixenes, actor Craig Clark seizes the lines and spews their dark wrath unreservedly. Likewise, Susan Poe Dickson takes the part of the "outspoken" Paulina -- Hermione's defender and somewhat strident conscience to Leontes -- and infuses her with the ramrod conviction of the righteous. Director Paul Norton makes the bold choice of portraying the comic rustics of Bohemia as literal clowns -- replete with circus whiteface, straw wigs, and oversized shoes -- and every actor called upon to serve up some bit of slapstick shtick does so gamely and with vigor, if not always comic panache.

What is true of the clowning is true of several aspects of the production; the cast's bravery and commitment doesn't always translate into work that draws its audience more deeply into the drama. Despite Clark's best efforts, Leontes remains a grim figure whose bitter persecution of his innocent wife is awful to watch and for whom it's very tough to work up any empathy. Dickson's Paulina is consistently strong but rarely warm, which flattens her character somewhat and diminishes her kinship with Hermione. And the production overall suffers from actors trying to propel dramatic moments with forceful voices and ending up just yelling.

For a good deal of this journey, then, you may find yourself as conscious of the effort involved in traveling as in the trip itself and the sights it shows along the way. You may even find yourself at some point unable to sense what feeling you might have at journey's end. But then, you crest that hill ... As the story returns to Sicilia, it is as if the production as a whole catches sight of its destination and comes alive with a light and warmth that wasn't evident before. Clark's stony Leontes softens into weary flesh, painfully aware of his failings and the blessing in the presence of his prodigal daughter. Evita Arce's Perdita glows with the joy of discovery, of both her father and of romance with her dear Florizel (a forthright and appealing Cameron Albin). And Clay Towery's Polixenes and James Lane's Camillo exude the bittersweet ache of embracing an old comrade lost for too long to a foolish rift. The description of their meeting is related simply and with grace by Jill Swanson, such that the sweet fragrance of forgiveness floats past us on the breeze. Then there is the magical climax, in which the wronged Hermione is resurrected. The stage is awash in wonder, and Camille Hines steps forth, positively incandescent, an avatar of light, an agent of love.

In these scenes, Paul Norton has tapped the heart of this tale, a glowing ember of hope and healing to last one through a winter. But he also builds on Shakespeare's wondrous conclusion, adding a coda that silently -- and so tenderly -- explores who is and isn't reunited at play's end. In a breathtakingly beautiful gesture so purely of the theatre, the play's swirl of pain and loss and restoration is centered in a red balloon, which is then released from a boy's hand to rise slowly, wistfully, into the night sky where it vanishes among the stars. Perhaps you too will witness this and will find tears rolling down your cheeks and feel in their warmth that sense of why you took this road and what this journey means.
-- Robert Faires

Forget Riverdance. Forget Michael Flatley and his sweaty, needlessly exposed chest. The stomping spirit of Ireland and its poignant tradition is captured by Brian Friel's sweet-natured memory play as presented by Mary Moody Northen Theatre at St. Edwards University. This family drama tells the story of five Catholic women living in remote Ballybeg, Ireland in the late Thirties. With both parents passed on, the five sisters must care for the dwindling farm, a shellshocked uncle, and Michael, a precocious boy born of a tryst between his mother and a syrupy traveling salesman. The story is narrated by a grown Michael (Bradley Carlin), looking back on these formative times with the aunts who raised him, armed with the gloss that distance brings as well as the aching knowledge of the loss that followed. His story takes place in one pivotal summer, when the advent of a new wireless radio in the home and the unexpected return of Michael's father, Gerry, ushers the sounds and promises of another place into their quiet, unassuming lives.

An able ensemble portrays the spirited Mundy girls. There's Kate (Annie Suite), the strong-willed, humorless schoolteacher, whose religion and responsibility leave no room for frivolities such as love and laughter. There's Agnes (Jill Wilson), the sweet, delicate seamstress who plays caretaker to feisty, curious young Rose (Alessia Wale). And beautiful Chris (Tara Battani), the unwed mother of Michael, longing for her youth and beauty as they slowly slip away. Neutralizing the tensions among all of them is Maggie (Lee Eddy, using all her lovable goofiness to advantage), the free-spirited, bawdy prankster of the five, whose humor and good nature make any argument seem futile. Gary van der Wege's set reflects the girls' rustic simplicity and the rhythm and hope that infects their lives. The stage is filled with wood, stone, copper, dirt -- the building blocks of a modest existence. But from the cracks springs wildlife of vivid beauty, sprouting color, and passion amid the grey, dusty rubble.

In the end, the quality of Dancing at Lughnasarides on the resonance of the subtle but paramount moments that pass between people and change their lives forever. Although the actors master their brogues with varying degrees of eloquence, everyone seems to trip over their tongue at some point. The demanding accent -- and the attention that performer and audience inevitably pay to it -- occasionally distract from these scenes of pregnant significance laced throughout. While an Irish play no doubt demands an Irish sound, the accent seems to preoccupy the actors at times, preventing them from truly disappearing into their characters. The most power is found in the silent exchanges, and this is where each actor manages to express the most. There are the fragile minutes of anticipation as Tara's wayward love Gerry (Chris Loveless) walks up the path, and you can sense the fear and excitement coursing through her frail, trembling arms. There is the palpable bond between wisecracking Maggie and her nephew Michael, and the moments we can sense how her heartfelt companionship warms the impressionable, lonesome boy. And of course, there is the dancing.

Dancing is practically a character itself in this play. Every character is swept up in the sound and the swell of its alluring beat; because, as this play explores, dancing can mean so many different things. It is the effortless expression of the human soul, an act that is at times intimate, as when fingers are laced together, and a man can feel a woman's breath on his neck or smell the perfume in her hair, and the music swirls around them like an ecstatic, knowing caress. But dancing is also solitary, as when the memory of a song wafting through the air sweeps through your body and into your toes, which wriggle with delight. But dancing, more crucially, is also social, a "wordless ceremony" of community and connection. In expressing this, Dancing truly shines, in moments of transcendent pleasure and joy -- creating a loud, stomping, shrieking ruckus, an exaltation of shared hope and humanity. And the pleasure and the laughter are so genuine, so infectious, that it's difficult not to let it linger with you on the way out of the theatre, a tiny imperceptible twitch of your fingers and feet, a quick sashay as you walk to your car, still swept up in the music and the memories all the way home.
-- Sarah Hepola