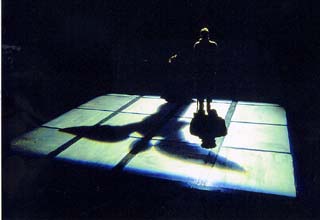 "To face loss with grace is key, I think," notes Prior Walter, a protagonist in Angels in America. "But it's impossible." In Perestroika, the conclusion of Tony Kushner's seven-and-a-half-hour epic, we bear witness to the agony of loss -- loss of life, loss of dignity, loss of loved ones, loss of direction, loss of faith. And because, as Prior correctly guesses, grace in the face of such loss is impossible, we witness the gut-wrenching emotions that ensue when characters must cope with death and its bloody handprint. In this brave, three-hour exploration of politics, philosophy, religion, and fantasy, director Dave Steakley has captured that blistering agony but also the swelling spirit that endures in a lovingly rendered production that -- despite its stumbles -- manages to soar.

Last season, the Zachary Scott Theatre Center produced Millennium Approaches, the first installment in Kushner's 1992 Pulitzer Prize-winning drama, and it brought the company not only a bevy of Theatre Critics Table and B. Iden Payne awards, but also the distinction of being the theatre's most successful drama ever. Perestroika brings back the same actors to conclude the tale of their characters' confused life at the close of the indulgent Eighties. There's Prior Walter (Jason Phelps), the tender, AIDS-stricken homosexual, and Louis (Martin Burke), his thoughtful, but frightened, former lover who fled when the reality of Prior's illness set in. Joe (Kevin Madden), the conservative Mormon closet case, has finally stopped denying his homosexual urges and gone to bed with Louis (in one steamy love scene). That, of course, leaves his fragile, phobic wife Harper (Meredith Robertson) to cope with her elaborate daydreams and Joe's fussy Mormon mom, Hannah (Karen Kuykendall). The notoriously homophobic homosexual Roy Cohn (Tom Byrne) is still sputtering piss and vinegar, but he is confined to a hospital bed, dying of AIDS, reluctantly cared for by the saucy Belize (Patrick Amos) and haunted by the ghost of Ethel Rosenberg (Kuykendall), whose execution he notoriously sealed.

But amid all this human drama, another tale is being told. For at the close of Millennium Approaches, an angel (Robin Christian) appeared to Prior proclaiming the famously cryptic lines, "Greetings, Prophet! The Great Work Begins: The Messenger has arrived." Here, we discover the prophet is, in fact, gentle, self-deprecating Prior Walter. And the Great Work? Well, as the angel explains, God has fled heaven, fed up with man and his foolhardy ways. Since the 1906 San Francisco earthquake, in fact, the angels have been in limbo, awaiting His return, and the only way to bring Him back is for humanity to stop progressing.

In the six years since its premiere, Perestroikahas met with a harsher critical voice than Millennium Approaches. In some ways, this has to do with the burden of resolution that Perestroika bears. While both productions are ambitious thematically, Perestroika must bring to a close the crises its predecessor brought to the fore. And finding closure to the century's most bitter battles is a mammoth, well-nigh impossible, task. To its credit, Perestroika manages to grant a resolution that doesn't feel saccharine -- it feels human. It feels like hope.

For Kushner, it is only through this violent devastation -- mental, political, physical -- that real growth can occur. And the hope Perestroikaoffers, perhaps the only hope anyone realistically viewing the AIDS epidemic can offer, is that after life has cracked open, only new life can grow there. And for this reason, Prior cannot heed the angel's command to "stop progressing," even if doing so might save his life or spare him pain. Because through this torturous cycle of loss, we learn and make -- perhaps reluctantly -- the strides necessary to keep our life moving. Or, as the lonely but liberated Harper says as she flies through the open skies, "Life is a kind of painful progress. Longing for what we've left behind and dreaming ahead."

Michael Raiford's set remains essentially the same -- spare, steely grey, cold, and tomb-like, with minimal set pieces moved on and off it. But where Millennium was scattered with floating feathers, Perestroika is filled with the white mist of the hereafter. As we move beyond the clouds, fog drifts in and permeates the whole room, making the set gleam a brilliant, luminous white. Sound designer Allen Robertson once again laces throughout the set changes tongue-in-cheek musical numbers evocative of the time and the themes -- Queen, Frankie Goes to Hollywood, Louis Armstrong -- that manage to add a touch of humor without undercutting the drama.

A solid ensemble of actors brings back their own particular strengths and weaknesses to the plate, but Perestroika allows new characters to show their muscle. As the snappy nurse and general caretaker Belize, Amos turns in a compelling performance, a terrific balance of sympathy and humor, punching up some of the play's funniest lines. But it is Phelps, as the unlikely prophet, who provides the show's real glue. In many ways, he has the most difficult role in a play filled with character stretches -- he sees angels, becomes crippled with pain, leaps from scene to scene and from heaven to the hospital and back again. But as the unbelievableand even outlandish transpires, it is his charisma and naturalness that keep us grounded in the story. He convincingly portrays seat-of-your-pants courage, incredulity, sheer terror, and still manages one of the play's best comebacks: "Fuck you. I'm a prophet."

There are times when Kushner's dialogue lapses into the didactic. For example, a scene in which leftist Louis confronts ex-lover Joe about his role in court decisions detrimental to the gay cause sounds particularly bombastic. But ultimately, it doesn't matter. I, for one, don't mind if Kushner's agenda does intrude, or even if he seems to be preaching to the converted. Because the message, and the performances behind them, still hold the power to prickle the hair on your arms and leave your eyes swimming in tears. The production is not perfect. But what a triumph for Steakley and his cast -- bringing this into our lives, making it ours to enjoy, allowing us to feel the loss, the grief, the confusion. And finally, the hope.
-- Sarah Hepola

LOOKING INTO THE MIND OF STEVE BRUDNIAK: THE MAD DOCTOR IS IN

"Weird." "Splendid." "Psychotic." "Witty." "Hmmm...." These remarks, taken from the exhibition's visitors' book, say it all. This collection by Steve Brudniak encompasses the brilliantly bizarre nature that has become a trademark of his work, psychotic though it may be.

If a small private Christian school seems a peculiar setting for a show by an "assemblage artist," you're right; it is. But it is a fitting oddity, since weird is Steve Brudniak's middle name. With skeletal blueprint-like drawings of Brudniak's "assemblages" lining the walls, and the pieces themselves scattered about the room, this hillside gallery, with its wall of windows letting in a flood of natural light and a grand view of Austin's environs, is transformed into a limestone laboratory; you feel that you've stumbled upon some kooky science experiment or modern-day torture chamber. Waffle irons, pendulums, dentist chair parts ... no piece of scrap metal or abandoned object is safe under Brudniak's creative drive.

Part Thomas Edison, part Dr. Jekyll, Brudniak walks a fine line between innovative artist and mad scientist, clever inventor and eccentric sculptor. A good example is Healer/Destroyer: Assemblage With Clockwork and Scorpion in Antifreeze, a beauty and beast all in one. A perfectly polished set of brass clock mechanisms toil away, while an unfortunate scorpion floats amid a glob of green goo. Mounted and affixed with a cluster of metal and iron, the piece is perfectly symmetrical, intricately clean, as fine a work as your family's antique grandfather clock. There just happens to be a dead scorpion crowning it.

The works are taken from statewide private collections, and it's refreshingly comprehensive. It's rare that one gets to view such a large collection of Brudniak's work, and these pieces fit together so well -- though viewing so many of them at once certainly supports the notion that Brudniak is a bit odd.

This is the kind of show that prompts one to ask, "What is art?" Are Brudniak's creations machines? Toys? Multimedia sculptures? Or simply physical manifestations of one strange guy's imagination? Whatever their ultimate label, they are unique and completely fascinating. That, surely, qualifies them as art. -- Cari Marshall