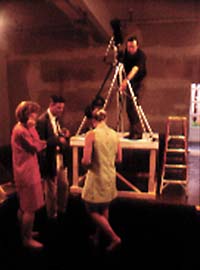 Come with me to San Antonio. We're going to hear the Solomon R. Guggenheim Museum's senior curator of film and media arts, John G. Hanhardt, lecture on the emergence and development of video art from 1963 to the present. Trust me, you'll be entertained. As a curator formerly with the Walker Art Museum in Minneapolis and the Whitney in New York, Hanhardt has not only watched the history of media art unfold, he is a "player," an important voice who has influenced many an artist's career.

Alex Gray, Program Associate for ArtPace, a foundation supporting the creation and understanding of contemporary art, introduces this three-evening series by explaining that the foundation staff has observed an increase in video and film projects by resident as well as regional artists. They feel the need to provide a historical context so that both staff and audience can better understand the work. Hanhardt has agreed to lecture on August 31, September 1 and 2. Chrissie Iles, curator of film and video at the Whitney Museum of American Art, will lecture on Friday, September 11, the day after the opening of a new exhibition of film and video works. On the evening of the first lecture, the room is filled with people. When Hanhardt, a small man with a friendly moustache, gray hair, and an unassuming posture, reads his prepared text, the thirsty audience is doused with information, much of which is hard to absorb. But as he begins to show snippets of film and video, and a series of slides, he walks away from his text toward the screen and speaks extemporaneously. The hours fly by. Despite the darkened room, no one is napping.

The first film he shows is a clip from TV in the Fifties: Ernie Kovacs. He places film and video art in a sociological and technological context. Having grown up with film and the emergence of TV as a central fixture in the home, artists in the Sixties begin to appropriate film and video for their own purposes. But are they making art? When New York Times art critic Hilton Kramer is asked to review film and video, he replies, "If it moves, I won't deal with it." I am reminded of comments made 25 years ago by a Laguna Gloria board member who questioned the validity of "plug-in" art. Change comes slowly.

Hanhardt shows work by video artists whose names are now familiar: Nam June Paik, Vito Acconci, William Wegman. He says that for artists working conceptually, film, video, installation, and performance art become critical. We see videos that are direct, narrative, and occasionally humorous, biting. The audience for art, once safely anonymous as it observed paintings and sculpture, is now being invited to participate directly, to walk into an installation, to be videotaped. No wonder we feel uneasy!

In the early Seventies, artists working in new media are supported by newly formed state arts councils, alternative spaces, public access cable, and the National Endowment for the Arts. As TV, film, cable, and video technologies advance, the artist benefits. In fact, Hanhardt's first lecture implies the inevitability of the appropriation of new media by artists.

After buying candy, popcorn, and soda — a new amenity (especially welcome for those of us who are driving home this evening) offered by ArtPace — we settle once again into our seats.

"One of the really important artists of this period about which I'm speaking is Bill Lundberg," says Hanhardt during the second presentation. He's talking about 12-year UT Austin faculty member Bill Lundberg, an internationally recognized artist and barely visible local presence. Much of Lundberg's early work appeared in Europe and New York. In 1992, he received a Fulbright Fellowship and was given an artist-in-residence position at the Museu de Arte Contemporanea da Universidade de São Paulo, Brazil. In 1994, he returned to Brazil with the support of a UT faculty research grant and, during the course of eight months, participated in six different exhibitions. Half a dozen Brazilian museums own his work. In Austin, we see his work only occasionally in UT faculty exhibitions.

Lundberg and two other artists are currently taking part in the foundation's internationally renowned residency program, through which selected artists are invited to San Antonio to stay for several weeks and create new work in ArtPace studios at the foundation's expense. The trio were selected to work at ArtPace by curator Susanne Ghez with the Rennaisance Society, Chicago, Illinois. Alex Gray confides that his participation in this exhibition is one of the reasons that the Guggenheim's busy curator has agreed to come to San Antonio, Texas. Handhardt was instrumental in arranging for Lundberg's one-person exhibition at the Whitney and his appearance at the 1983 Whitney Biennial.

"So what did you think when he showed slides of 'Charades' and 'Solitaire,' and said all those nice things about you?" I ask the artist. "I wished I'd given him better slides," he responds.

Lundberg is a modest man, tall and a bit awkward until he starts to speak. He says he has chosen teaching (and Austin) to "give something back," to escape, now and again, from the selfish business of making art. He teaches drawing, a video course, and a graduate course on ideas. Amidst the inch-thick stack of materials that ArtPace provides for me about the artist is an interview from 1980 in which he explains his work: "Although most of my work in recent years has been with film, I still have not used the medium exclusively. I generally look for the best means of using my ideas rather than trying to adapt them to a single type of expression."

Lundberg loves film over video, but it is an expensive medium. The ArtPace residency has been a gift, he says — six weeks of "candy every day." He turned his studio into a set where he filmed volunteers willing to dress up and attend a staged cocktail party. Lundberg works from storyboards, directing the action while allowing spontaneity. His cameras were mounted high above the "actors." The end result is a fly-on-the-ceiling view of how people move, act, talk, during social encounters. This work, like many of his earlier works, is about relationships. I, for one, immediately see myself — uncomfortable shifting position, clutching a glass filled with liquor, accepting awkward hugs and kisses — or at least I think I do. The images are projected on the floor and reflected on mirrors mounted in the ceiling. "Ideas shape what artists do," says Handhardt during tonight's lecture. On the other hand, Lundberg says that he begins with a visual image, sometimes a dream, and builds simultaneously on image and idea. Next March, Lundberg will return to ArtPace as a supportive spouse during his artist-wife Regina Vater's residency. She has been here for six weeks with him. He is happy (and relieved!) that she will also have an opportunity to realize a project in this studio/exhibition space. No doubt her installation will contain a video or film component as well.

"How could artists not develop a new kind of language through media?" Handhardt seems to ask throughout his second lecture. His enthusiasm is palpable as he describes the ways in which artists have appropriated the history of film and investigated materials during this dense period of production. This is, in fact, a dense presentation, which, by presenting a diversity of style and content, does indeed provide a context for critical thinking about video.

I had forgotten how quickly and completely the world shifted during the last 10 years. Handhardt describes the political and sociological changes that occurred toward the end of the Eighties and into the Nineties: the end of the Soviet Union and apartheid, the Gulf War, AIDS, decreases in funding for the arts and public welfare, a new politicization of the arts. And then there is the proliferation of Internet technology, interactive media, virtual reality. He introduces artists who are reconstructing history and representing the self through video and film projects. Mark Rappaport's Rock Hudson's Home Movies from 1992 draws a laugh. Jim Campbell's Hallucination, in which video images of visitors to the exhibition are "burned" on a monitor, produces shudders. William Kentridge's 1991 Mine, which comments on both the Holocaust and South African history using line drawings, film, and video, should have played through to the end. I wanted to see it all.

Tonight, Hanhardt singles out for praise the work of Diana Thater, a second video artist now in residence at ArtPace. She is from Los Angeles. The third artist-in-residence is Kendell Geers from Johannesburg, South Africa. Hanhardt concludes his presentation with an interactive Web site creation projected on the screen in front of the room. He waves his hands, extolling the future possibilities of media art as it speeds along the electronic superhighway. "We are looking at international networks with local narratives," he says. "Popular culture is our leading export." Maybe this is good news, and maybe not. Decide for yourself. The value of these lectures and the exhibitions at ArtPace truly is their ability to build a context for critical consideration of ideas, installations and performance, video and film. Artists are provided the opportunity (and funding) to produce their very best new work, curators and art historians are invited to comment and discuss that work, and you and I can drive down the road and see what's happening, make up our own minds.

As I am leaving ArtPace, a young man asks why I've come all the way from Austin to San Antonio for a two-hour lecture three evenings in a row. "It's closer than New York," I tell him. "And just as interesting." Come with me to San Antonio and see for yourself.