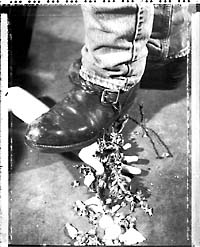 Wrapped in noise, smoke, smarts, and oh-so-much attitude, Salvage Vanguard Theater's Altamont Now is, unfortunately, an experience as empty as the numbed hipsters it portrays.

At the 1969 Rolling Stones concert in Altamont, Calif., the Stones hired a group of Hell's Angels as bouncers, but after an afternoon baking in — among other things, psychedelics and sun — the Angels turned the concert into an unexpected frenzy of violence. In a terrific conceit loaded with potential, playwright Bucci takes a fictitious character born at this event and plants him as a youth superhero, a modern-day rocker with a venom for The Man. Todd Lowe plays Richard Havoc, the drug-addled rock star who has seemingly overdosed on his own reflection. In an electric opening scene, Havoc (whose reptilian moves and greasy untamed mane manage to recall Jim Morrison, Michael Hutchence, and Kurt Cobain) mounts the stage with house rock band Enduro (Bucci's real-life band) and launches into a big salty doglick of a greeting: "Hey all you people come gather round, let's get together gonna fuck this town!" From there, though, the plot gets rocky. Havoc has bought a missile silo in the Panhandle of Texas, where he and his cronies are holed up. There's Karen Kennedy (Stephanie Swenson), the bratty, spaced-out former child star, and her adoring associate Travis (Travis York), who seems to waffle psychotically from shy and unassuming to maniacal. Tagging along is Alan Smithee, the ludicrously bewigged film geek making a documentary on Havoc that's "just as cool as Gimme Shelter." And last, there's Alex Urban (Dan Dietz), Havoc's former right-hand man whose stay in the slammer has inexplicably turned him into a kind of mandroid. In something like Tom Wolfe's Electric Kool-Aid Acid Test with a dash of Nineties irony thrown in, our characters quibble, shoot up, shoot each other, and rock out live. But all this joking around comes to a halt when Havoc reveals his plans to launch a nuclear warhead right at our nation's capital on the 30th anniversary of Altamont.

Will he or won't he seems to be the dilemma, except that it's not very interesting either way, because there's never anything invested in these characters and their hipster hell from the beginning. Neulander has propped up plenty for the audience to marvel at: a great set by J.E. Johnson, taped footage projected on a wide screen for the coveted "multimedia effect," a rock band that knows the score. Some of the best moments come from having the rock band in-house; it's one coup Altamont manages to pull off without a hitch. But the screen footage, at least for the first half of the play, is more confusing than anything else.

Besides, all this bluster gets in the way of what this playwright does best, which is write good dialogue. Bucci has the inane blather of the affected down pat, and he is a master of below-the-belt karate chops, quick verbal slugs in the belly. Some of the lines, expectedly, are classics. But the rest of the dialogue seems curiously vapid, and with characters that seem more like caricatures, there's nothing there to carry the bulk of the show. Whether this is the fault of the writing or the direction isn't exactly clear, but whatever point is being made gets buried beneath the barrage of lights!camera! action! that bloat the Warehouse stage.

Over the past six months, Salvage Vanguard has hyped up this production to be a mind-blowing experience. Instead, it's a playful poke at Generation X — inspired but deeply flawed. I wouldnot be surprised if Bucci and Salvage do produce a show that does blow the minds of Austin theatregoers; Altamont Now isn't it.
— Sarah Hepola

Schoolhouse Rock: A Cheer For Learning 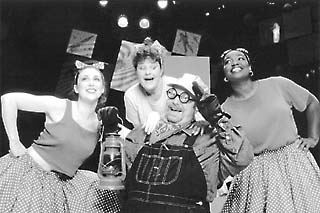 A few years ago, while hosting the B. Iden Payne Awards, I tried to make light of the Zachary Scott Theatre Center's penchant for staging feather-light pop music revues. Taking the practice to what I thought was a comical extreme, I announced that the theatre was about to hold auditions for You Are My Candy, Girl: The Timeless Music of the Archies, with songs taken from the old Saturday morning TV cartoon series. Now, a mere handful of seasons later, here comes Zach with its latest pop music revue, and, lo and behold, it's a collection of songs from an old Saturday morning TV cartoon series. So much for my stab at satire.

Of course, now that I've seen Zach's staging of Schoolhouse Rock, now that I've seen what this resourceful company can do with a show full of songs from an animated series, I'm ready to concede that my "joke" was never really all that funny. Zach tackles every project it does with imagination and an infectious sense of play, with enthusiasm and a seemingly boundless reserve of energy, and with professional panache. Consequently, its productions — even the airiest of its musical hit parades — are smartly crafted entertainments, profuse with pleasures. I'm beginning to think the theatre could produce a revue based on the periodic table and make it an engaging diversion.

In this instance, fortunately, the material with which Zach is working isn't quite so ... inert. Indeed, quite the contrary. Despite the fact that the songs in Schoolhouse Rock are intended to communicate elementary educational concepts — multiplication tables, parts of speech, the names of the planets in our solar system — they are, by and large, tightly crafted little numbers, with appealing bursts of lyrical wordplay strung along decidedly catchy melodies. The various songwriters — Lynn Ahrens, Bob Dorough, Dave Frishberg, Kathy Mandry, George Newall, and Tom Yohe are credited collectively — really managed the neat trick demanded of them: make learning fun. From the ode to "my hero, Zero" to the legislative odyssey of "Just a Bill on Capitol Hill," these chipper three-minute ditties send academic basics bouncing into your ear where they keep buzzing cheerily until the concepts they carry are absorbed by your brain.

The songs' craftsmanship and effervescence give Zach plenty to work with, and the production team here strive to showcase them with the same spirit in which they were written: fun. Heyd Fontenot provides a playhouse of a set, with little step units that roll and hide lots of secret compartments, a ladder to a treehouse-like overhead space, and walls crowded with information — chalkboard lessons, assorted words, and mid-century textbook images of astronauts and the like. Leslie Bonnell provides costumes in Crayola-vivid hues — limes, roses, royal blues — with accent pieces — say, a vinyl backpack and an orange orange pith helmet — that add whimsical punctuation marks to the songs' various characters. Greg Easley's dance steps are light but exuberant, the stuff of playgrounds everywhere. And the five members of the cast sprint, shuffle, and skip across the Whisenhunt Arena Stage, clowning, beaming, joshing, dreaming, with pre-adolescent delight. The delicious comedienne Meta Rosen and the wonderfully expressive Scott Schroeder are especially winning in this regard.

Where the production really shines, however — and where you can see once again the power of the Zach Musical Machine — is in the performances. The material hardly seems the kind that would lend itself to distinctive interpretations; given the level at which they're aimed, the songs seem at first blush to be closer to jingles or jump-rope rhymes. And yet the way they're sung here reveals the skill with which they were composed and shows how the right performer, director, and musical director can shape the delivery of a well-written song into a singular event, a fusion of music and artist and character. Felicia Dinwiddie fires up "Sufferin' 'Till Sufferage" with the mighty righteous soul of the long-oppressed, and her forcefulness and emotion warrant a loud "amen!" Courtney Wissinger, on the other hand, finds an uncommon tenderness in the delicate music-box tune "Figure Eight;" she sings softly, demurely, but with glimpses of mischief that suggest an ineffable vulnerability. Throughout, the performers put a personal stamp on these simple numbers, and it reflects the care and detail with which Zach's musicals are shaped. In this case, the musical director and man at the helm are the same — longtime Zach artist Allen Robertson — and he proves himself again a wizard of the musical, infusing both individual pieces and the work as a whole with his creative drive, his desire for excellence, his love of play, and his openness of heart. In more ways than one, he makes this show sing.

Schoolhouse Rocks is light, yes, an amusement, yes, but it doesn't deserve any points off its grade for that. Its captivating style, its viviacious expression — a cheer for learning — put it at the top of the class. — Robert Faires